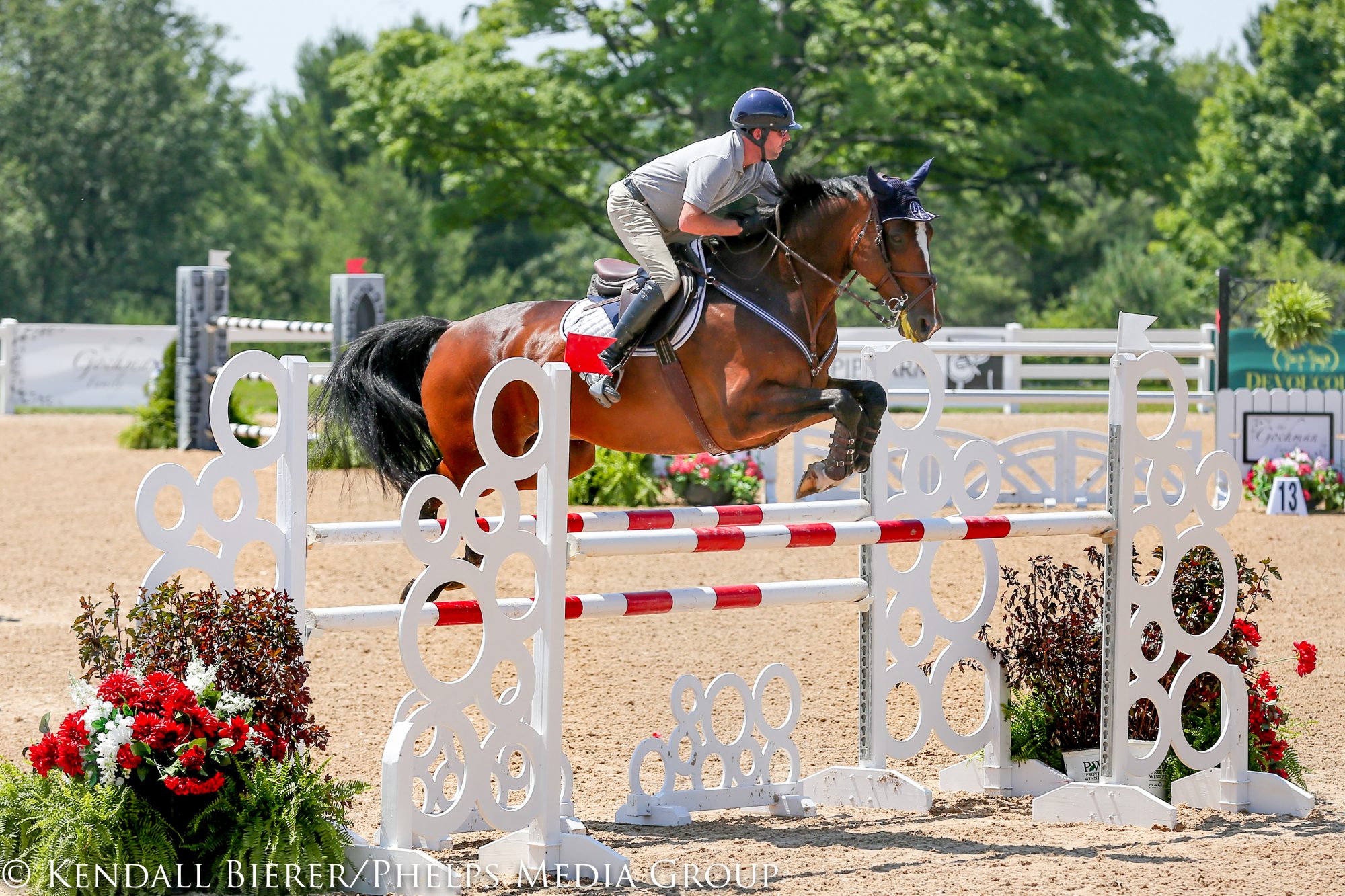 Traverse City, Mich. – July 20, 2016 – The third week of the Great Lakes Equestrian Festival (GLEF) kicked off with cloudless skies, a gentle wind and the nation’s top horse and rider combinations. Exhibitors prepared for a full schedule of competition at the destination venue, many were relaxed from two days of exploring all Traverse City has to offer, from sugar-sand beaches and blue waters to picking cherries and exploring the best restaurants in north Michigan.

Douglas Boyd captured the win during the $2,500 1.40m Open Jumpers with Berkley III, owned by the Sapphire Riding Academy out of Mettawa, Illinois. He traversed the Pierre Jolicouer-designed track with the 10-year-old Dutch Warmblood gelding, breaking the beam in 43.559 seconds to secure the first place.

“We have had him for about a year and a half now, and I brought him along,” Boyd stated. “We have been keeping a slow and steady program, just letting him come into his own. He actually jumped some 1.50m Welcome classes over that last couple of weeks, and he was in the ribbons. We could not be more pleased with him. We were out there basically schooling him today, having fun and letting him burn off some steam. I though the course was good, straightforward and a good course to kick off the 1.40m for the week.”

Caitlyn Shiels, of Sheffield, Massachusetts, and a frequent competitor across the midwest circuit, rode to the second place award with a four-fault finish in the jump-off. She rode her own Cavalier II, a 9-year-old grey gelding, to the time of 46.730 seconds, as the second of only three competitors to master the first round and move into the short course. Scott Lenkart piloted Beorn, owned by Alliy Moyer, to the third place finish.

During the 1.30m Open Jumpers, Aaron Vale and North Face Farm’s Quality On Top rode to the top of the leader board to seal the victory. The professional rider bested the field as the eighth in the order, riding the Hanoverian gelding to a speedy time of 35.070 seconds. Boyd finished just behind Vale with Calvigo, owned by the Sapphire Riding Academy, with a clean time of 36.133 seconds. David Jennings and Aventador, owned by Maffitt Lake Farms, rounded out the top three with a more conservative pace of 41.947 seconds, leaving all rails in place.

Boyd stated, “This is our third week, and unfortunately, our last week at GLEF. We have to head home after the Welcome Stake on Friday. We brought five show horses, and one young horse, just to get some experience. It has been great; we love it here. We were here in the past, we have always liked it-it is a great area to come, it is a great venue, and it has turned into such a huge event. We had a wonderful circuit, and we are already looking forward to next year.”

The $1,000 1.30m Open Jumper division saw 16 horse and rider combinations compete, but it was David Beisel who rode to the top of the class. Beisel rode Rumorosa, a 10-year-old Mexican Sport Horse mare, owned by Harlow Investment Enterprises, LLC of Mason, Ohio, to the untouchable time of 33.690 seconds, outrunning Kristen Collins and Formella by nearly three seconds. The third place was awarded to junior rider Emily Perez aboard Boukati B, owned by G&W Equine Partners.

Beisel said, “Rumorosa did the Friday Grand Prix last week, and she will compete in it again this week. We just wanted to put her in an easy class before doing the 1.40m tomorrow and then the Welcome Stake on Friday. I have been riding her about two years, just working to develop her. She likes to go, she is a forward going horse and I try not to go too quick. She has a lot of speed, she is a fast horse, and she is a great turner.”

“I got to go fishing all morning yesterday morning, and the day before that we were out on Torch Lake the whole day. Traverse City truly is a family affair, the whole family loves it. We all show, and we are able to enjoy all that Traverse City offers. The horse show is great, and we love being able to get on the water and it allows for quality family time. It is a special thing that we can do this-there is so much family fun stuff, it really makes it a special show.”

GLEF will continue to welcome riders and thrill spectators over the next two weeks throughout the first series of competition, which runs July 6-31. Week Three runs July 20-24 and will feature highlighted jumper events such as the $25,000 Devoucoux Welcome Stake on Friday, July 22, and the $50,000 Great Lakes Grand Prix, presented by the Ingram family on Sunday, July 24.

The Great Lakes Equestrian Festival welcomed hunter competitors to its third week Wednesday at the Flintfields Horse Park. Riders have dubbed the Great Lakes Equestrian Festival the “destination show,” and it has already collected favorable reviews for the 2016-edition. With cloudless skies and mountain views, a number of contenders came into the R.L. Polk Family Main Hunter Ring intending to set the bar high, and started the first day of competition strong with top placings.

In the High Performance Working Hunters Courtney Calcagnini took the top spot in the over fences class, as well as the handy round, aboard Fleur de Lis Farms’ Bowie, a 10-year-old Warmblood gelding. Taking second place in both classes was Tamara Provost and Jus d’O a 7-year-old Belgian Warmblood stallion owned by Rick Moyer. Rounding out the top three were Peter Pletcher and Columbia, an 11-year-old Holsteiner mare owned by Blanche Strunk in the over fences class and Meagan Murray and Editorial, a 9-year-old Holsteiner gelding, owned by Rebecca Price in the handy class.

Calcagnini was thrilled to start off her week on such a high note, especially after a bit of a setback during the second week of the series. “Last week I was here and I jumped two jumps,” Calcagnini said glumly. “He flung his shoe off into the jump, and I had to pull up-that was my week.”

Her two trips Wednesday morning had a much better outcome and the pair is now getting ready for the $25,000 USHJA International Hunter Derby presented by the Gochman Family and Baxter Hill Farm on Saturday, July 30. Calcagnini was happy with her rides to start off the week. “I just wanted to be really smooth,” she said. “He did all the inside turns really well. He is a derby horse, so he’s super handy and he’s perfect so I’m just along for the ride. He has a huge stride so you have to be careful, you want to go a little bit around the end of the ring but then get him back a bit in the lines because he can leave out a stride easily.”

Calcagnini is returning to Traverse City for the first time in a few years and was full of praise for the show and the new management. “The management is super,” she said. “They’ve done an awesome job. It is such a relaxed atmosphere, everyone loves it. Going out on the lake in the afternoons and on Mondays is so much fun.”
In the Regular Conformation Hunter division, sponsored by Sugar Run Farm, it was Hilary Johnson and Maria Rasmussen trading out the top spots with Kelsey Wickham and Pick Six placing third in both classes. Rassmussen took home the blue in the over fences class aboard Bliss, a 7-year-old warmblood gelding owned by Corporate Way LLC; while Johnson and Voyager, an 8-year-old Warmbood gelding, owned by Copper Fox LLC, were on top in the handy round.

Rasmussen was happy with the rounds that her young horse put in. “I’m really proud of that horse,” she said. “He’s really green and we’ve been working really hard. He went awesome today, he’s a really good boy. He’ll do just the conformation classes this week.”

In the First Year Green Working Hunter Class, sponsored by Wrenwood Farm, the top spot again went to Johnson aboard Copper Fox LLC’s Voyager, an 8-year-old Warmbood gelding. Second place was awarded to Quirino a 10-year-old Holsteiner, piloted by Peter Pletcher and owned by Audry Giles-Gates. The third place went to Kelsey Wickham and Wait and See Farms’ Pick Six. In the handy round, Pletcher took the first place, while Melissa Donnelly and Corlando 49, a 10-year-old Holsteiner gelding owned by Elizabeth Becker, finished in second place and Jennifer Nadalin and Westeros owned by Katie Jordan rounded out the top three.

Johnson was enthusiastic about her rides to start off the week. “I was very happy with the horses,” Johnson said. “Voyager is a blast to ride, he jumps like a freak. He’s a young horse. He did the high Pre-Green Hunter division last year, and we just took our time with him. We let him mature and he’s really coming into his own. He’s a quiet horse, he takes a lot of leg, a lot to motivate him, especially on a hot day like this, but he just gives you such a cool feeling in the air.”

Horses are not the only form of entertainment lined up for this year’s Great Lakes Equestrian Festival. The festival has teamed up with top musicians and entertainers from around the country to offer fun-filled evenings for this year’s concert and dinner series.

The Summer Evenings at Flintfields continues, with a Tribute Equine Nutrition Wine and Cheese Reception, as well as a 6 p.m. performance by The Ragbirds, hosted by Porterhouse Presents. The fun continues on Sunday with the WTCM 103.5 Family Fun Day and AC Paws. Come out and see the Olate Dogs, “winner of America’s Got Talent.” There will also be a Coney Island Hot Dog and Brat Bar, hosted by Porterhouse Presents.