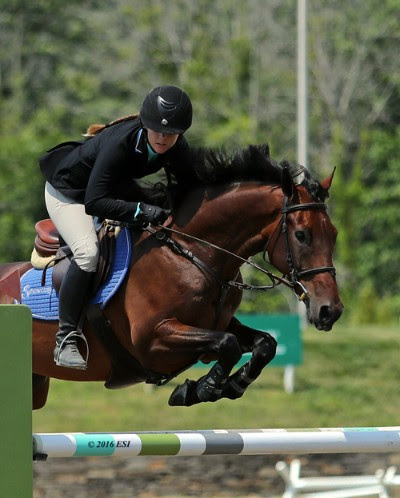 Saugerties, NY (July 21, 2016): After a brief hiatus following the spring series, show jumping returned to the Hudson Valley as Week IV at HITS-on-the-Hudson commenced for a jam-packed summer of big money and top-notch competition.

“The course was very nice for the first day of the circuit,” said Sadler after the win. “It was friendly, but it was also tough enough for the field of riders and horses here; it was a good confidence builder for the rest of the week.”

Sadler and Cezarro were first to test the course, advancing to the jump-off where they went double-clear in 42.361, a time that would remain unsurpassed.

“Cezarro is an eight-year-old that I got last September,” said Sadler. “He’s small, but very game. Anything you put in front of him he goes for with a ‘let me at it’ attitude; hopefully towards the end of this year we can start doing some bigger Grand Prix with him.”

The next jump-off round would come from Ronan McGuigan of Far Hills, New Jersey, piloting Bingo, owned by Markers Make, LLC. They put down a valiant round in an effort to catch Sadler, clocking in at44.009 for the eventual second-place.

Topsfield, Massachusetts equestrian Victoria Birdsall followed McGuigan with Luxina, owned by Christina Fried. They advanced to the jump-off and added another double-clear to the pack. They would ultimately place third with a time of 44.862.

Callan Solem of Glenmoore, Pennsylvania, and VDL Wizard, owned by Horseshoe Trail Farm, LLC., claimed the last double-clear round of the class. They crossed the timers in 45.985 to snag the fourth-place prize.

Rounding out the top five was Fifty Shades, owned and ridden by Andrea Torres Guerreiro of Waterford, Virginia. They finished the class with the fastest four-fault round in 43.129 to take home fifth-place.