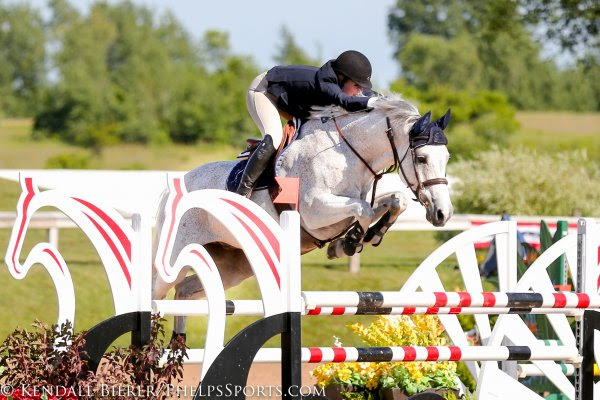 Traverse City, Mich. – July 21, 2016 – The grey gelding, Mach 5, lived up to his name on Thursday afternoon as rider Dana Wille led the way during the High Junior/Amateur-Owner Jumpers at the Great Lakes Equestrian Festival (GLEF). Wille imported the Dutch Warmblood from Germany two years prior, expecting that he would max out at the 1.20m-level; however, as Thursday proved, he not only has the speed, but also the scope. The duo surpassed a field of 14 contenders to race to the top of the leaderboard with nearly a four-second margin.

It was Lindsay Strafuss and Troya Montecristo, owned by Castle Pointe Farm, LLC, who took the early lead in the class, riding to a clean and clear time of 39.560 seconds. Following consecutively, Sophie Michaels and MCB Maya shaved the time with a tight rollback to a tall vertical that put them just ahead at 38.546 seconds.

Wille tackled the course like a professional, never hinting that she only recently turned 17 years old. “There is a reason he is named Mach 5,” Wille laughed. “He showed it out there today for sure.”

More affectionately known as ‘Speed’ around the barn, the gelding left all rails in place and turned with clear agility through the serpentine course, designed by Pierre Jolicouer. They broke the beam in 33.640 seconds. The only other rider to nearly catch their time was Daisy Farish and Great White, who fell shy of the finish with a time 37.099 seconds.

“This year has been a big surprise for us,” Wille said. “He has been amazing so far, and we know each other so well. We can read one another’s minds out there. He is just the sweetest horse you will ever meet. He loves to joke around with you, he is really special.”

Wille continued, “This is a stepping stone into where I want to go, which is the grand prix. We are waiting on his FEI passport so that we can do some bigger stuff. We did a couple of the U25 classes when we were in Kentucky, which he was amazing at, top eight there. He won multiple prix during the Wilmington series this winter. It is great for both of us to get out there and gain the confidence in these classes.”

It was David Dorner and Chaciara who sped to the victory during the 1.35m Open Jumpers. The duo took the win with a time of 73.339 seconds. Second place was awarded to Douglas Boyd and Calvigo, owned by the Sapphire Riding Academy of Mettawa, Illinois, who finished with only four faults. Taylor Reid and her own Ugano rounded out the final placings with the third place finish, following a more conservative path than her prior contenders.

Dorner said, “Chaciara is a young 8-year-old who is just moving up. We have competed in the 1.30m and 1.35m classes, and we are hoping to move her up to the 1.40m classes next week. She has jumped a couple of prix in the Mid-West, but nothing of this caliber. The course today was a little difficult, but she jumped clean, which was very good.”

He continued, “She is just starting to come into her own and she had a good time out there. She needs a soft ride, as soft as I can be. She is delightful, the friendliest horse I have been around. Every morning she whinnies at me, turns her head sideways and wants for me to come and pet her. She has the personality and the talent.”

David Beisel had a back-to-back victory in the Open Jumpers, riding to his second win of week three with Rumorosa. Beisel has worked with the mare for the last two years, and is aiming to compete in the $25,000 Devocoux Welcome Stake on Friday. He has been preparing her through the Open Jumper divisions, giving her an easy school and win on Wednesday in the 1.30m Open Jumpers, and then taking the lead in the 1.40m Open Jumpers on Thursday.

The pair entered the ring at a gallop, taking a direct approach to the first vertical of the track. As one of only three to clear the first-round course, Beisel knew that he could leave little room for error, and took the course at a more conservative pace. They completed the shortened track with no faults and a time of 44.519 seconds. Douglas Boyd and Berkley III finished second, while Taylor Reid and Boucanier captured the third.

GLEF will continue to welcome riders and thrill spectators over the next two weeks throughout the first series of competition, which runs July 6-31. Week Three runs July 20-24 and will feature highlighted jumper events such as the $25,000 Devoucoux Welcome Stake on Friday, July 22, and the $50,000 Great Lakes Grand Prix, presented by the Ingram family on Sunday, July 24.

“Moonwalk is a very special horse,” Johnson said.  “We just love him! I’m not sure how we got quite so lucky to come across one like him. He is one of those once in a lifetime kind of horses.”

Johnson animatedly described what a joy he is to ride. “He is one of the most fun horses to ride,” she said. “He’s just happy, he’s very fluffy and bouncy and you don’t have to pull on the reins, you don’t have to kick a lot he’s got one of those canters where you see the jumps from 30 strides out.”

Moonwalk does double duty also showing with owner Kendall Meijer. “The plan next year is that he really doesn’t need to move up to the High Performance,” Johnson said. “He’s going to be done with the professional ranks. He knows his job well enough so I hope to move her up to the Amateur Owners next year and keep cruising.”
Horses are not the only form of entertainment lined up for this year’s Great Lakes Equestrian Festival. The festival has teamed up with top musicians and entertainers from around the country to offer fun-filled evenings for this year’s concert and dinner series.
Johnson was once again in the tricolors as the Green Conformation Hunter Champion with Voyager an 8-year-old warmblood gelding owned by Copper Fox LLC. Reserve Champion went to Maria Rasmussen and Bliss a 7-year-old warmblood gelding owned by Corporate Way LLC. In the High Performance Working Hunters the championship went to Courtney Calcagnini aboard Fleur de Lis Farms’ Bowie, a 10-year-old Warmblood gelding. The reserve championship went to Peter Pletcher and Columbia, an 11-year-old Holsteiner mare owned by Blanche Strunk.

In the First Year Green Working Hunter Division, it was Peter Pletcher and Quirino, a 10-year-old Holsteiner owned by Audry Giles-Gates, who earned the top honors. The hunter ring is a second career for Quirino, who Pletcher began riding after last year’s winter season in Florida.

“He did the jumpers first,” Pletcher said.  “The owner called me and said, ‘Hey, I think this might be a hunter or derby horse. Would you give him a ride?’ I said, ‘Sure!’  She brought him to the farm, and I knew for sure that he would make a great derby horse.”

Pletcher’s instincts about Quirino have certainly proven correct. “”He is turning out to be a great hunter and derby horse, Pletcher said.  “He has a great attitude, brave and fun to ride. He won the $30,000 USHJA International Hunter Derby the first week of Country Heir. He has placed in almost all of them that we have done. We are excited for the derby finals.” The pair will certainly be one to watch in the hunter rings this week.

Hunter competition will continue Friday in the R.L. Polk Family Main Hunter Ring with the junior riders getting a chance to shine. Sunday will see the $5,000 USHJA National Hunter Derby, sponsored by Glory Days Farm LLC.

The Summer Evenings at Flintfields continues, with a Tribute Equine Nutrition Wine and Cheese Reception, as well as a 6 p.m. performance by The Ragbirds, hosted by Porterhouse Presents. The fun continues on Sunday with the WTCM 103.5 Family Fun Day and AC Paws. Come out and see the Olate Dogs, “winner of America’s Got Talent.” There will also be a Coney Island Hot Dog and Brat Bar, hosted by Porterhouse Presents.