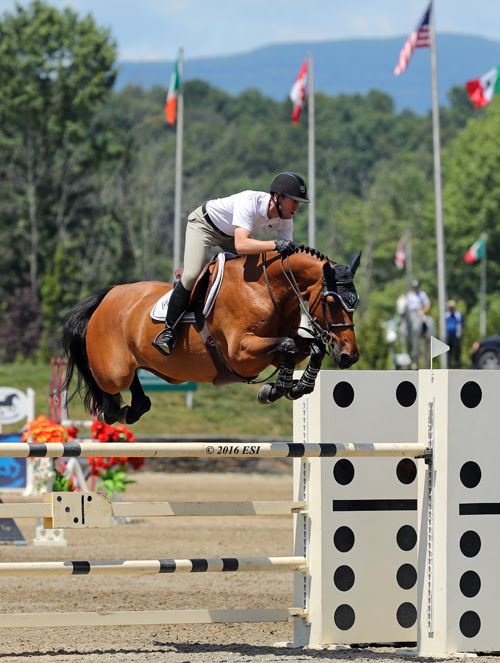 Mclain Ward and Best Buy on their way to a $15,000 Kindred Bio Jumper Prix win.

Saugerties, NY (July 24, 2016): The show grounds have been buzzing with excitement in Week IV at HITS-on-the-Hudson and the action did not stop at the Grand Prix ring with Saturday’s $15,000 Kindred Bio Jumper Prix. This season’s class marks the bio medical group’s first-ever sponsorship in the equine industry.

Riders and horses turned out to contest the course set by Bernardo Cabral of Lisbon, Portugal. For the second time this season at HITS Saugerties, the team to beat would be the world’s top rider and 2016 Team U.S.A Olympic Equestrian Mclain Ward aboard Best Buy, owned by Double H Farm.  Ward, of Brewster, New York, also garnered first and second place in Friday’s $25,000 SmartPak Grand Prix.

“Best Buy is a horse we’ve had since she was 5 years old. She’s been a big winner for us and is always very competitive,” said Ward. “The course was nice, it’s a 1.40-meter course for developing horses, and it’s always good to have a featured class for those horses to step up and compete in.”

Thirteen advanced to the jump-off with five producing double-clear rounds. The course featured several galloping spots, allowing riders and horses to open up and use the whole ring.  First to capture a clean jump-off round was Laura Chapot of Neshanic Station, New Jersey, piloting Out of Ireland, owned by The Edge. Chapot and Out of Ireland won this class at HITS-on-the Hudson I in May. This week, they clocked in clear in 45.177 to set the tone for the field, ultimately taking home the third-place prize.

The next double-clear round came for the victors, Mclain Ward and Best Buy. The powerful bay Holsteiner mare galloped through the course as the team took each fence by storm. They clocked in with a cool, clear 43.002 to shave a full two seconds off of Chapot’s time, establishing a dominating lead that would hold up through the rest of the class.

Berkley, Massachusetts equestrian, Michael Janson followed Ward to provide the crowd with another clear round. Janson and his mount Candori, owned by Rebecca Lewis, were careful and quick, but their time of 49.054 was not enough to surpass the lead. They would eventually earn fourth-place for their efforts.

Several valiant efforts ensued before another double-clear round would be seen. The next came with Sarah Scheiring of Morristown, New Jersey, and Dontez, owned by Molly Ben-Menachem. They stopped the clock in 50.787 for the fifth-place prize.

The order was dwindling down and only a few trips remained between Ward and the victory. Manuel Torres, riding out of Waterford, Virginia, and Crusing Altitude, owned by Santa Catalina Farm, swooped in with a speedy round to spark the competition. With Crusing Altitude’s large stride, they stormed across the ring, clocking in at 44.710 which would settle them in second place.