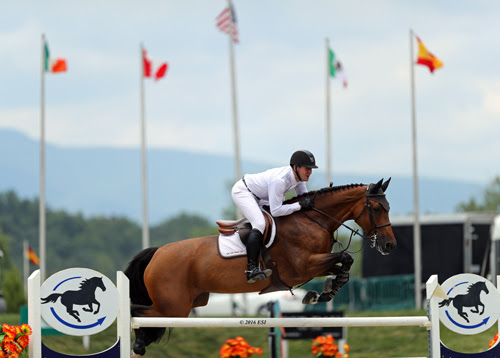 Saugerties, NY (July 23, 2016): As the weekend commenced at HITS-on-the-Hudson IV, equestrians descended on the Grand Prix ring for a shot at the title in Friday’s $25,000 SmartPak Grand Prix.

The Order-of-Go was stacked, and the crowd gathered to watch what would be an exhilarating battle of the quickest over the course set by Bernardo Cabral of Lisbon, Portugal. The world’s top rider and member of the 2016 U.S. Olympic Show Jumping Team, Mclain Ward, would take home first and second place.

“I know this course designer very well, and I’ve always thought he does a very good job,” said Ward of Cabral. “Bernardo did a tremendous amount of apprenticeship in the early part of his career with some great course builders, and that really shows in the work he does. With this being a mid-summer, national horse show, for horses that are either developing or maybe had a little time off, this course wasn’t too difficult but was challenging enough.”

“[Tina La Boheme] is a mare that we are very excited about. She won at Devon and at Old Salem this year as well — she’s really been on a roll,” said Ward. “She has had a little rest, so it was nice for her to come back so well today.”

“Zerly is a horse has had some great success before with Chris McCrea, that I bought earlier this summer,” said Ward. “I was a fan of the horse, and I bought with the idea to resell, so it’s nice to have a nice stage here at HITS Saugerties to show her off — we’re happy to be here.”

Six returned to the jump-off to contest the shortened course, with Ward and Laura Chapot of Neshanic Station, New Jersey, each having two rides. The eight-fence jump-off included several galloping spots, a tight inside turn after the double combination to the second-to-last fence and ended coming home over a vertical.

First to contend were the victors themselves, Ward and Tina La Boheme. They set out on a speedy,  efficient track. They angled the mid-course line and galloped off to the right-hand turn towards the double. After executing a sharp inside turn after the combination to the second-to-las fence , they powered toward the finish and crossed the timers in 40.863.

Leslie Burr Howard of Darien, Connecticut, followed piloting Utah. An unfortunate rail at the first fence would keep them off the top of the leaderboard as they crossed the finish in 43.557. They would eventually round out the top five, taking home the fifth-place prize.

Next was Victoria Birdsall of Topsfield, Massachusetts, and MacArthur, owned by Christina Fried. A rail at the second-to-last fence would earn them sixth-place with a time of 46.468.

Laura Chapot has won a large share of Grand Prix and Jumper titles at HITS-on-the-Hudson this season, and the powerhouse equestrian returned again for another winning shot. She followed Birdsall with Quointreau Un Prince, who she co-owns with Ward, and they laid down a speedy round as they chased Ward’s leading time. The seconds wound down on the clock and the crowd cheered as they took their final leap across the finish. They would come close with a time of 41.781 for the ultimate third-place.

Ward entered again aboard Zerly for the chance to overtake his own time. They opted for the same track and took each turn and angle with no holds barred, clocking in at 41.445, just fractions off the lead, but also just ahead of Chapot to claim the red ribbon.

Chapot had a final chance to lay claim on the title with Thornhill Kate, co-owned with Mary Chapot. They powered on as the seconds ticked by, but a heart-breaking rail at the final fence would seal their spot. They clocked in at 42.398, sealing the fourth-place prize.