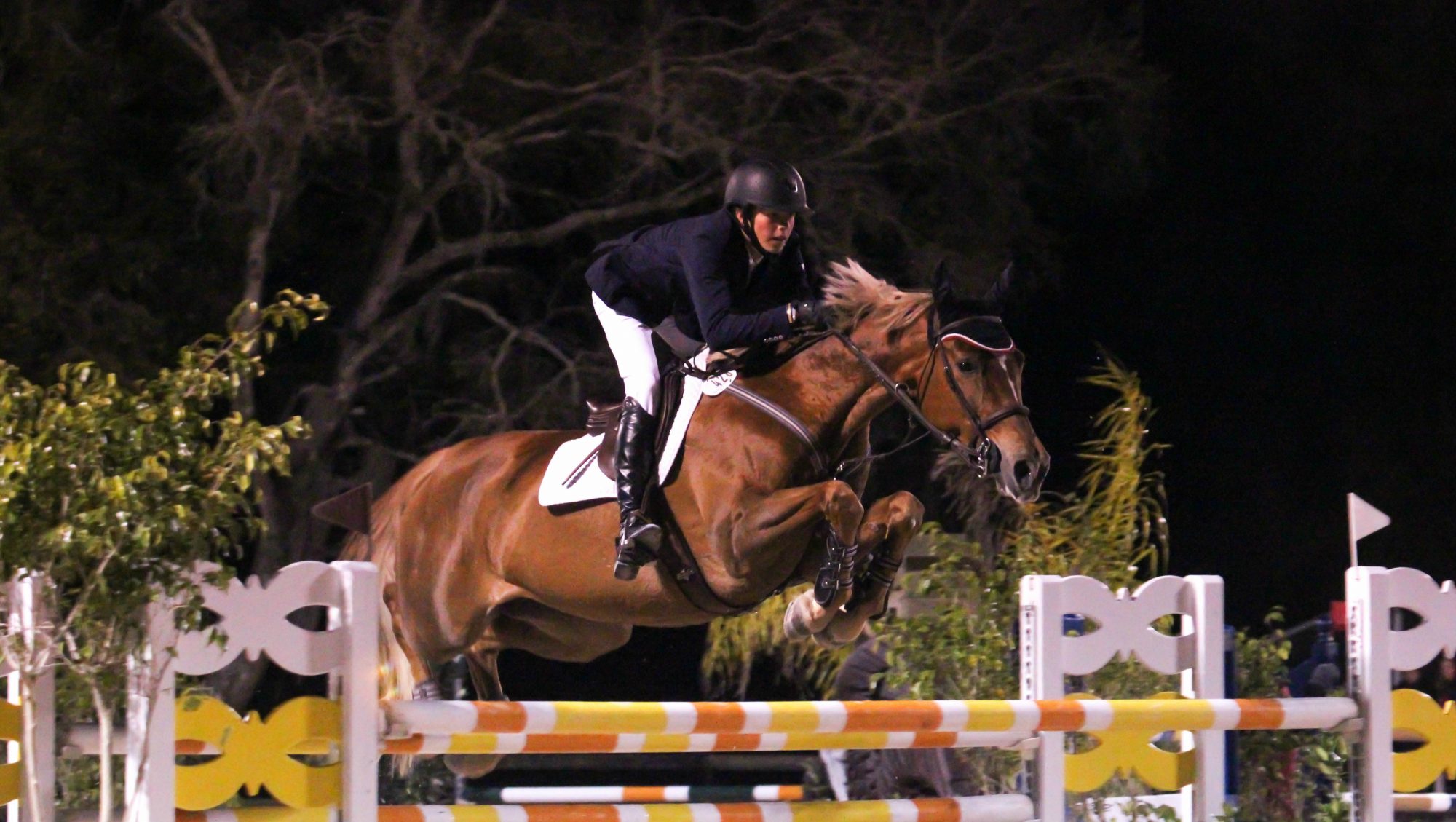 When Brian Moggre moved into his childhood home at two years old, it caused a domino effect on his life. A barn was located nearby, and on the daily trip back and forth to school, Moggre pleaded for his parents to let him stop and visit the horses. His mother, Teena Moggre, gave into the constant begging and allowed him to start taking lessons at four years old.

Starting out as just basic lessons on ponies quickly turned into more. At the age of five, Moggre started showing. Soon, he climbed the jumper ranks swiftly. At only eleven years old he showed in his first ‘Mini’ Prix in Waco, Texas. Taking home a 6th place out of more than 20 competitors on his Junior Jumper mount: Taffy.

Continuing the constant climb of bigger and better classes, Moggre competed on his first Junior Riders team in 2015. With MTM Ace of Spades as his mount, he secured a clear round for the Zone 7 team which included Maddie Chenoweth, Ali Ozymy, and Jennie Nolen. Recalling the experience he said, “I wasn’t expecting much going there. It was my first time with really big fences. I was very happy to be able to get a clear round. It felt great!”

From there, Moggre showed in the Prix de States at the Pennsylvania National Horse Show for Zone 7. He helped his teammates Hunter Holloway, Lucas Porter, and Abby Funk to achieve fourth overall. As the 2016 show year commenced, Moggre decided to compete at HITS Ocala in the winter. He rode with Mike McCormick and Tracy Fenney at MTM farms for the ten consecutive weeks of the circuit.  Showing almost every week, he appreciated all that his trainers did for him, “Thanks to Mike [McCormick] and Tracy [Fenney] for pushing me further into my career. Riding with them really pushed my boundaries.” Moggre finished the circuit successfully with a Reserve Champion in the High Junior Jumpers, three wins and placings in each High Junior Jumper Classic, and placings and a win in the Friday Grand Prixes.

Along with his top placings during the HITS Ocala Circuit, Moggre really enjoyed making new friends and experiencing new things. His idea was to make the best of any horse show, “Aside from horses, just being there was a lot of fun. I loved meeting new people! Making a horse show more than a horse show was a very great thing.”

Balancing horse shows and school work is a tricky hat game. Moggre explained how he had handled his responsibilities, “Riding has always been my number one priority. Usually at the shows I schedule my time out. Starting at eight to five I’ll ride. Then five to ten I’ll socialize and do some homework.”

After a successful winter circuit, the next big show would be the historic Devon Horse Show. Moggre qualified on two mounts, and lead the national rider rankings in the Junior Jumper division. MTM Ace of Spades, “Acey,” and MTM Flutterby, “Izzi,” are his top horses. MTM Ace of Spades is a ten year old Dutch Warmblood who has been partnered with Moggre for a little over two years. MTM Flutterby is a nine year old half thoroughbred and half Dutch Warmblood who has been his mount for over one year.

The Devon Horse Show is a prestigious event attracting the very best. Moggre was slightly intimidated and very excited to attend. “I wasn’t quite sure what it was going to be like. I went there very unknowing. I wasn’t sure how they would build, how the ring would ride, and who would be there.” Yet, his lack of experience in the ring did not hinder his success. Moggre was able to top a competitive field of 26 other competitors. He speaks fondly about his mount, Izzi. “It’s still pretty unreal about winning the Devon blue. I couldn’t be happier about that day. Izzi was amazing in that class. She was super-fast; I couldn’t ask for anything more from her.”

This summer brings big shows for the up and coming rider. One of the many shows he will attend is the North American Junior and Young Rider Championship at the Colorado Horse Park. He currently holds the top two spots in the Zone 7 standings with his mounts: MTM Ace of Spades and MTM Flutterby. According to current plans he will take Izzi as his partner.

After the NAJYRC,  Moggre will compete in the $250,000 Junior/Amateur-Owner Jumper class and the $500,000 Hunter Prix in HITS Saugerties, as well as in Maclay Regionals, Capital Challenge, WIHS, PNHS, and CHP in the fall.

Moggre maintains goals as a way to motivate himself to accomplish more. From a  young age he has aspired to be on the Olympic team and represent his country. “I’m really big on setting goals, very determined on it. Since I was three or four years old I have dreamed to go to the Olympics. Some smaller goals would be being first in the nation for Junior Jumpers and competing in the Nations Cup.”

Before any class- big or small- Moggre is very superstitious. He is very keen on keeping his habits and routine the same. “I’m extremely superstitious, especially about my Animo pants. I always have to make sure I have a pair on before any class. I also can’t eat during the morning. But, I will scarf down food between classes later on.”

Moggre is quick to thank all of the people who have helped him to achieve his goals. His first note of gratitude is to his parents, and then to his great trainers and close friends. “I have to thank my mom and my dad. Without them, it wouldn’t be possible andI really owe them a lot. [I thank[ Gianna Aycock and Colby Coltrain for getting me to where I am now, and Mike [McCormick] and Tracy [Fenney] for pushing me further into my career. I appreciate people like Dorrie Douglas and Natalie Haagen for being there for me whenever I needed it.” Which will be the most popular equestrian events of 2022?

What are the Three Most Popular Forms of Betting for the Horses?

Determination, Discipline, and Teamwork Make the Dream Work for...