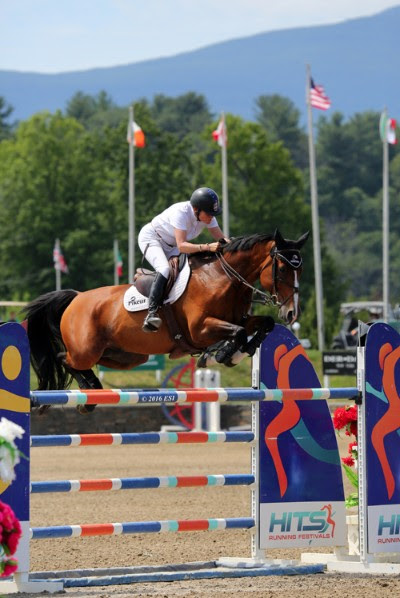 Saugerties, NY (July 25, 2016): Riders and horses turned out for the event of the weekend at HITS-on-the-Hudson IV, the $75,000 Horze Equestrian Grand Prix, for a chance to claim the lion’s share and blue-ribbon bragging rights.

Seven advanced to the jump-off over the course set by Bernardo Cabral of Lisbon, Portugal. It was a race against the clock in a down-to-the wire challenge, but the team to emerge victorious would be Olympic champion Leslie Burr Howard of Darien, Connecticut, and Utah.

“I thought Bernardo did a great job. The course suited the class and the field of competition here today,” said Howard. “Utah is my old guy, we’ve been together for about 10 years now, so we know each other pretty well.”

First to challenge the shortened course was 2016 U.S. Olympian Mclain Ward of Brewster, New York, and Tina La Boheme. They started off at a quick pace, strategically angling each fence, when an uncharacteristic refusal at the second-to-last fence would stall their finish. They clocked in at 53.752 with four faults and one time penalty.

Neshanic Station, New Jersey equestrian Laura Chapot followed with ISHD Dual Star, owned by Mary Chapot. They set the tone for the remainder of the order, powering through the course and clocking in at 39.299, which would ultimately place them third.

Fernando Martinez Sommer of Lerma, Mexico, was next to contest the jump-off course with Cor Bakker. An unfortunate rail at the first element of the combination would ultimately earn them sixth place as they crossed the timers in 40.661.

Saugerties local Heather Caristo-Williams and Evening Star, owned by Ralph Caristo, gave the crowd another clear round. Their score of 42.872 would not be enough to edge out the leading time, but would garner them the final place in the top five with fifth place.

Three remained in the jump-off order, and Laura Chapot had two of those trips. Chapot locked in another clear round with Thornhill Kate, co-owned with Mary Chapot. They crossed the finish at 41.121, which would ultimately earn them fourth-place.

Leslie Burr Howard followed suit, knowing she would need to be quick and clear to beat Chapot’s current leading time of 39.299. They galloped through the course no holds barred, angling the second-to-last fence and flying to the finish as the seconds wound down. They stopped the clock at 39.107, edging Chapot off the top and moving into first place.

“My plan for the jump-off was simply to be fast and efficient, but also clear,” said Howard. “I knew Laura’s horses were fast, but my horse can really turn and that’s where I knew we could shave the time.”

Chapot had one last chance to reclaim the title with Quointreau Un Prince, co-owned with Mclain Ward. They put the pedal to the metal, and it looked as though the win might slide back into the hands of Chapot, but they clocked in at 39.189, just fractions of a second behind Howard. Chapot would still go home with three ribbons in the top five: second, third and fourth.

As the curtain closed on Week IV at HITS-on-the-Hudson, junior and amateur riders took their shot at the money and the blue ribbon in Sunday’s $10,000 Junior/Amateur-Owner Jumper Prix.

Three would jump clear in contingency for the win over the course set by Bernardo Cabral of Lisbon, Portugal. The course rode quickly and sharp turns and long, galloping tracks tested the navigational skill of both horse and rider, but the victors would be Eliza Month of Acton, Massachusetts, piloting Calumpi.

First to contest the shortened course was Cindy McGrath of Hummelstown, Pennsylvania, and Caruso, owned by Wynnwood Farm. An unfortunate rail at the first fence would keep them from the win as they clocked in at 38.104. McGrath and Caruso would ultimately go home with the second-place prize.

Month and Calumpi followed with a speedy, efficient round. They powered through the course and smoothly cleared the difficult mid-course vertical that many riders opted to angle to save time. They stopped the clock in 35.068 to take over the lead.

Bryn Sadler was the final equestrian in the jump-off order. Sadler, of Sante Fe, New Mexico, and Britt W.H., owned by Showcase 81, LLC., passed the timers in 36.439, but two rails thwarted their chance at edging out Month or McGrath, settling them in third place.

Fourth place belonged to Maddie Chenoweth of Houston, Texas and Caplander. They nearly made it to the jump-off round, but crossed the finish in the first round with one time fault.

Oyster Bay, New York equestrian Debbie Dolan Sweeney and Dakota, owned by Sagamore Farms, claimed the final spot in the top five with the fastest of the four-fault rides.