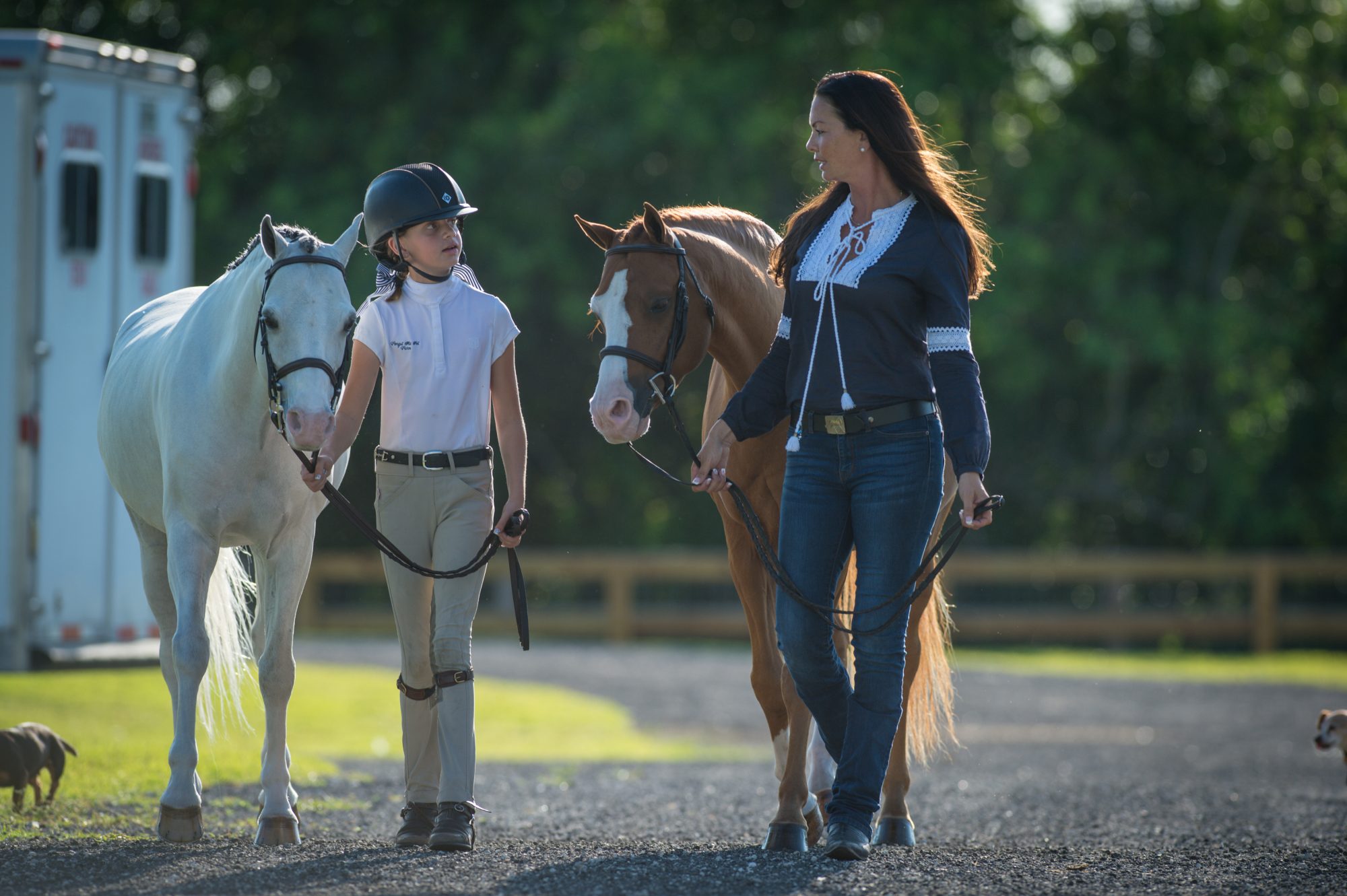 See more from Stefanie Mazer in the 2016 Pony Issue HERE!

Stefanie Mazer’s Forget Me Not Farm is every pony-crazy child’s dream. The driveway is lined with small paddocks and clean, white fencing. Ponies of all shapes, colors, and sizes graze contentedly and acknowledge visitors with a lazy glance. The beautiful, clean barn is scaled to its inhabitants, with low crossties and grooming boxes, and small grip brushes. Fat, shiny ponies stand patiently and await their diminutive riders. Out in the sand ring, long, lean Stefanie Mazer watches as a young child canters around the ring, her expert eye assessing every detail. The jumps are horse show caliber- walls, boxes, and flowers- scaled down to best suit the riders and ponies who jump them. It is a Lilliputian mecca for pony riders. Mazer knows ponies and has built her business in Wellington, Florida, primarily as a pony training and sales facility. With 22 stalls, her business is busiest during the Winter Equestrian Festival (WEF) circuit when the area is flooded with equestrians from all over the world. Mazer loves her job, equally enjoying teaching young riders, training, and sales. Single, with no children of her own, Mazer is dedicated to those that ride with her. “I call them my kids. If they need to spend the night, they do. If we need to pick them up at school, we will. We just make it work.”
Mazer’s year starts in mid-December with the pre-circuit WEF shows and continues at a strong pace through the Devon Horse Show in May. After Devon, she slows down until the frenzied week of Pony Finals which feeds into a busy fall circuit. Mazer trains kids of all levels- from beginner to elite- and focuses on selling ponies. “People send ponies to me to sell because I get a lot of phone calls. There are some buyers who will shop with me and no one else.” Her reputation for honesty, hard work, and marketing acumen have made her a success story at the pony ring.

Mazer utilizes method and logic in sales. When a pony arrives to be sold, she first assesses it phys ically. “I go over them as soon as they arrive. We check their teeth, soundness, and conditioning.” A pony must be in optimum physical health in order to maximize value. Once the physical status has been addressed, Mazer rides them first before putting a child in the stirrups. After getting a feel for the pony, she decides which of her available riders is best suited to the animal. Her goal is to market the ponies in the show ring. “No pony will get sold standing in the barn.” Mazer discusses options and strategies with the owners as she navigates the dynamic and complicated pony sales market.

For ponies which will be offered as “packers” for less experienced kids, Mazer will use a similar rider to showcase the pony’s suitability. If she is selling to the high end of the pony division market, Mazer will use one of her top catch riders, who have included Emma Kurtz and Augusta Iwasaki. In every scenario, Mazer endeavors to “frame the pony in the best way possible.” Her goal is not only to market the pony successfully, but to match it with its next rider successfully. Mazer works closely with the buyer’s trainers and representatives toward a positive outcome. When showing ponies to prospective buyers, she is careful to be respectful of other trainers. She will work with them to conflate the rider’s ability, goals, and financial criteria in order to match them with a suitable animal. Further, Mazer will network with trainers all over the United States in hopes of finding the right pony. In spite of a seller or agent’s best efforts, matching a pony, rider, and trainer sometimes does not work out. Mazer is committed to attempting to resolve the situation in a mutually satisfactory manner. First, she will attempt to ascertain the cause of the discord (is it a physical problem or a training issue?). Then, she will work with owner and trainer toward a positive outcome.

As a trainer, Mazer embraces the basics of riding: straightness, rhythm, and position. She believes in the importance of equitation as good form leads to better function. “More leg, less hand, no perching,” she teaches her students. Fun is paramount to Mazer. In the often intense pressure of the pony ring, she tries to get her riders to relax and “keep a sense of humor.” Often, she has to field the competitive aspirations of parents as they pressure their kids to succeed. Always, she endeavors to exemplify ethics, dedication, and commitment to her students.

Mazer believes that the pony market is healthy and active. As the complexion of the market changes, so do prices and sales cycles. “The crazy prices of a few years ago are gone.” The top ponies are still in demand for both the pony hunter division and the children’s hunter division. As an alternative to immediate purchase, many buyers choose the lease or lease/purchase option. As a buyer’s agent, Mazer is thorough and patient in her appro ach to identifying “the proper vehicle for the kids to learn to ride and show successfully.” As a seller, she espouses full disclosure, explaining “the good, the bad, and the ugly” to the potential buyers. On either end of the sales cycle, Mazer desires happy riders and well placed ponies.

Coaching winners from USEF Pony Finals and Winter Equestrian Festival to the Blenheim Pony Challenge and West Coast Pony Finals, Stefanie Mazer knows ponies. Whether as a trainer or a sales agent, she has dedicated her professional life to the pony ring and the success of both its two legged and four legged competitors.

This article was the cover story in the August, 2016 issue of The Plaid Horse. Read the entire issue.