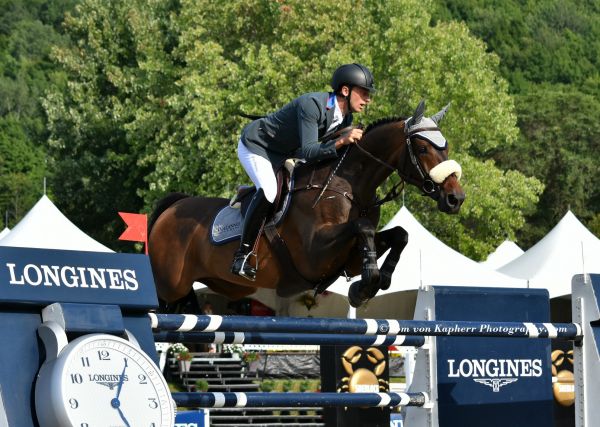 Bromont, Quebec – July 29, 2016 – The last week of the International Bromont continued with the victory of American rider Andrew Ramsay on Stranger, in the FEI Québec Original Open Welcome on Thursday, July 28, 2016

Spectators and riders at the International Bromont were treated to an exciting event designed with brio by Olympic course designer Guilherme Jorge. Although the course was not easy, time was not a factor in the first round, which allowed 15 riders to take part in the jump-off.

In total, 36 rider-horse pairs took the course including Andrew Kocher, winner of the FEI Open Welcome of July 22 at International Bromont, as well as Lucy Deslauriers, who won the Grand prix with Hester on Sunday July 24.

Six Countries in the Mix

There are six countries represented in the Welcome Stake including Canada, the United States, Mexico, Colombia, Ireland and Russia.

The jump-off was a certainty as early as Ljibov Kochetova (RUS) on Balou du Reventon and Andrew Kocher (USA) on Uppie de Lis both executed a clear first round. They would be joined by Ali Wolff (USA), Todd Minikus (USA), Lucy Deslauriers (USA), Alison Robitaille (USA), Lauren Tisbo (USA), Laurie Bucci (CAN). Andrew Kocher, who stood out as a very fast competitor in the first week of the International Bromont tries to establish the reference time, but a fallen bar prevented him from taking the lead. The quickest round in the jump-off was executed by Todd Minikus, in only 40.57 seconds; however, a bar down at the last obstacle put him in fifth place.

International Bromont acknowledged the presence of George Morris, who was there to witness his young protégé, Andrew Ramsay, claim the victory.

The International Bromont presents its 41st edition in the picturesque setting of the Bromont Olympic Equestrian Park, in the heart of the beautiful Eastern Townships region. For more information on the programming, please visit our Web site at www.internationalbromont.org.

International Bromont would like to thank the Ministère de l’Éducation, de l’Enseignement supérieur et de la Recherche as well as the Ministère du Tourisme du Québec for their support. General admission: $10 per person and free for children 12 and under. Preferred admission: $ 25 per ticket.

Available on the grounds

The International Bromont is a non-for-profit organization. All profits are invested in equestrian activities, Bromont Olympic Equestrian Park venue and grassroots development. Supporting the International Bromont makes you enjoy two weeks of great CSI competitions with the Quebec friendly sense of hospitality, while achieving your marketing objectives and gaining visibility.

A list of accommodations is available online at www.internationalbromont.org