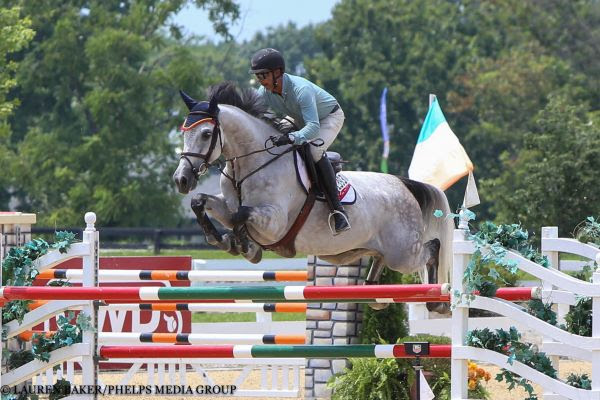 Lexington, KY – July 27, 2016 – Before heading to the Olympics with the Venezuelan team in less than a week, veteran show jumper Pablo Barrios brought his string to the Kentucky Summer Horse Show Series to jump his final classes in preparation for Rio.

Ortiz and the Synchronicity Group’s D’ulien Van De Smeets delivered the second clear round, but were unable to catch the lead. The duo finished in second place after clocking a time of 70.312 seconds.

Barrios and Stackfleth were the first combination to go clear, tripping the timers with a blazing time of 62.319 seconds in the speed class. Their lead would hold out for the win, but not before Juan Ortiz and and Mavis Spencer would attempt to challenge the quick time.

“Stackfleth is still green, but I think he has a lot of quality,” Barrios said. “There were a lot of rollbacks on the course, which could cause you to lose a little ridability if you didn’t pick the right pace in the first few jumps. He doesn’t like to have a rail down, and when he has a little rub, he really tries hard at the next one. He still is a horse that you need to take to the jump because he doesn’t go by himself yet, but he’s getting there.”

Barrios said he acquired full ownership of the horse two years ago after owning half of him because he liked him so much.

“I have big hopes for this horse for the future,” Barrios explained. “He already won a national grand prix, and when they’re 8 and they’re capable of doing that, it’s amazing. I think he will be a very nice horse. He has a beautiful back end, and I like him a lot.”

Spencer and Dubai, a Neil Jones Equestrian Inc. entry, were the third combination to go clear, ending on a time of 71.968 seconds to secure the third place ribbon.

After finishing two weeks at Kentucky Summer, Barrios will head to the Rio Olympics, where he will represent the Venezuelan team with his horse, Antares, and teammate Emanuel Andrade.

“It’s very nice to be back in Kentucky,” Barrios said. “I love it here, and I think the horses love this place. I have the great opportunity to keep my horses in the Kessler’s facility, so they love it there. This will be my last schooling opportunity before the Olympics, so I’m just going to do tomorrow’s grand prix with Antares, and he will leave [for Rio] on Tuesday.”

“I think this course had plenty of questions, and to win you had to go fast,” Karolyi said. “Manuel is a very slick and fast rider. I was there when he went, so I counted all the strides he did, and I took two or three strides out from his track, and that’s how I ended up taking the lead.”

Venitienne is a fairly new ride for Karolyi, as he acquired the mare at the Winter Equestrian Festival in March. Karolyi cited the mare’s talent and breeding as two of her best qualities.

“She has an amazing way of jumping,” Karolyi explained. “She has talent. I think she’s for sure one of the most talented young horses I’ve ever owned, so that’s very exciting. Not only does she ride like tiny horse, but she also has the scope and carefulness of a big horse. She’s a very modern type.”

In addition to his victory in the 7-Year-Olds, Karolyi also placed third in the 1.35m Open Jumper division with Isibelle, another talented, up-and-coming mare. The duo was just .2 seconds off the leading time in the tight race for the blue.

“She’s a chestnut mare, so she goes a bit her own way,” Karolyi explained, laughing. “You always have to make them think it’s their idea. She’s evolved amazingly, and she is a gun. She really puts her heart into it, and I think in the end that’s what’s going to make her such a successful horse.”

The victory in the 1.35m Open Jumpers went to Grace Long and Badger Hill Farm LLC’s Gelati, whose time of 37.35 proved unbeatable, despite the top four finishers coming within hundredths of a second of the lead. Second place went to Blythe Marano and Urban, who finished just one-tenth of a second behind Long and Gelati.

The jumper action will continue on Thursday with the $25,000 Hagyard Lexington Classic, while other highlights of the week include the $5,000 Hallway Feeds USHJA National Hunter Derby, the $10,000 Under 25 Grand Prix, and $50,000 Rood & Riddle Kentucky Grand Prix.

The professional hunter riders enjoyed a beautiful opening day in the Stonelea Ring at the Kentucky Horse Park. To kick off the day, veteran hunter rider Kelley Farmer took home blue ribbons in both over fences rounds of the Green Working Hunter Division.

Farmer was aboard Jane Gaston’s KWPN gelding, Because. Though their partnership is relatively new, the duo had a successful winter season in Wellington and have been racking up wins ever since.

“I thought he went around lovely today,” Farmer explained. “He always tries hard and goes so smooth. He is such a good horse, and if I stay out of his way, I think tomorrow will be great! As usual, this horse show is run well with beautiful jumps and perfect footing.”

“Splendid has had a good summer,” Goguen said. “She did well in Florida and has been having nice results coming out of the winter season. She is easy every day and such a nice mare. There are no tricks with her, and she is very steady.”

The day wrapped up with the High Performance Working Hunters where Sydney Shulman dominated the division by earning blue ribbons in both over fences classes and the under saddle class. Shulman, who is based in Greenwich, Connecticut, rode Cosmeo, who is owned by DK-USA Sporthorse.

“I thought my rounds were consistent and he was jumping amazing,” Shulman said. “We have been working on making him more hunter-y as he was previously a jumper in Europe. Every time he goes in the ring he gets better and better.”

Cosmeo left quarantine in March, and this is both Shulman and Cosmeo’s third time competing in a high performance division.

“He is so powerful and scopey when he jumps. It’s really the coolest feeling ever!” she continued. “I cannot imagine not doing this division with him because he is such an amazing athlete.”

“I love this show,” Shulman explained. “It is a very well run show with great management, footing and jumps. I bring all of my horses and clients here.”

The professional hunter divisions will wrap up Thursday in the Stonelea Ring, with equitation taking place on Friday.

Approximately four miles away from the horse show,discover the place where elegant comfort in an ideal location meets excellent service and affordability. At the Clarion Hotel Lexington, you’ll find well-appointed accommodations with options of two double bed, two queen bed, king rooms or suites and exceptional amenities such as our free hot breakfast buffet. Home of the Kentucky Horse Park, the Lexington Convention Center, University of Kentucky and the Kentucky Bourbon Trail – our Lexington hotel is on Newtown Pike at Exit 115 on I-75, close to all the big attractions, and is the perfect place to stay whether you’re here to get down to business or have some fun. Best of all, bring your furry friends for any trip because the Clarion Hotel in Lexington is also pet-friendly.

Campground reservations: Reservations may not be made through the horse show office. To reserve a campsite at the Kentucky Horse Park for any of the horse shows, please call the Campground Store at 800-370-6416 or 859-259-4157, or email Ryan McGaughey atryan.mcgaughey@ky.gov. Be specific as to the show name and the dates you wish to stay. Check-in time is 2 p.m. and checkout is noon. You must make arrangements with the Campground Store if you plan to arrive earlier than 2 p.m. or stay later than noon. Vehicles that are not removed from a campsite by checkout time will be towed.