Home Press Release Irish Sport Horses in the Limelight at the 2016 Dublin Horse... 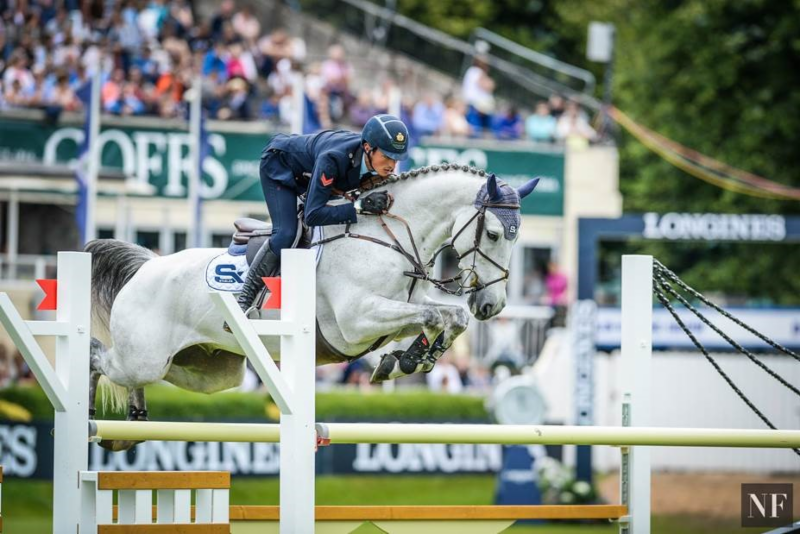 Italy’s Lorenzo De Luca stole the show individually winning a total of five international classes in addition to being a member of the winning team during Friday’s Furusiyya FEI Nations Cup event.

Limestone Grey was bred in County Limerick by David Moran of Deelside Stud. The ten year-old gelding by Try-Time is out of the Irish Sport Horse mare Millpark’s Courageous Lady, who herself competed at 1.20m level as a young horse.

Limestone Grey, then owned by Limestone Paddocks, in the seven year-old section of the Irish Sport Horse Studbook Showjumping Series which led to the pair being selected for the FEI/WBFSH World Breeding Jumping Championships for Young Horses in Lanaken, Belgium. It was there that he commanded the attention of Stephex Stables and was subsequently purchases by the Belgian based operation. Lorenzo De Luca, who rides for Stephex Stables, had his first international outing with Limestone Grey in October 2015. They have since enjoyed a handful of top five placings at international level prior to their hat-trick at this year’s Dublin Horse Show where they won the Sport Ireland Classic, the Serpentine Speed Stakes and The JLT Dublin Stakes for award of the Wylie Perpetual Trophy.Francis Connors campaigned

The past twelve months have been remarkable for Greg Broderick and the reliable Irish Sport Horse MHS Going Gobal. Bred by the late Ita Brennan at Mill House Stud in County Kilkenny, MHS Going Global made his CSIO5* Nations Cup debut under Ireland’s Greg Broderick last August. The duo rose to the challenge recording a double clear which helped the Investec Irish Showjumping team claim the Aga Khan Nations Cup trophy. Impressively, Broderick and MHS Going Global repeated their performance to record yet another double clear in this year’s Nations Cup at Dublin CSIO5*. Ireland’s winning team at St Gallen in June also saw the pair record another double clear, again a repeat of their 2015 performance at the Swiss Nations Cup event.

MHS Going Global is by the Quidam Junior I and out of the Cavalier Royale mare Gowran Lady who comes from an already proven damline that has given us horses such as Kilcoltrim (Comdt. John Ledingham) and Royal Athlete (Markus Hauri).

Waterford’s Francis Connors also campaigned MHS Going Global as a four year old. Broderick took the reins in 2011 and has produced the Irish-bred gelding impeccably since then. Together they represented the Irish Sport Horse Studbook at the FEI/WBFSH World Breeding Jumping Championships for Young Horses in both 2012 and again in 2013 where the pair finished in an impressive 7th place. The following September saw Broderick and MHS Going Global make their CSIO4* Nations Cup debut at Arezzo, where they recorded a promisingly clear and four.

Last week’s victory in the Dublin Speed Derby sponsored by The Clayton Hotel brought the tally of international victories that Ardcolum Duke has recorded under Billy Twomey  to eleven. On Saturday the pair took 4th in the Accumulator followed by 2nd in the Speed Championship the next day.

Ardcolum Duke only began his showjumping career, with Shane Quinn, as a six year-old. From there he went to Victoria Golden and subsequently to Shane Goggins with whom he made his international debut in 2013.

At fifteen years of age the traditionally-bred Irish Sport Horse Cisero recorded his third international Puissance win under a third different rider. This time it was Ireland’s Shane Breen who guided the gelding over the 2.20m wall to share the win with fellow Irishman Jack O’Donohue, riding Acorad 3.

Cisero is by the Irish Sport Horse Errigal Flight and out of the Ballinvella mare Bellfield Lady. The Puissance specialist was bred in County Offaly by Patrick Coonan. Liam O’Meara, who campaigned the gelding for the majority of his career to date, recorded the first of Cisero’s three wins in 2012, also at the Dublin Horse Show, before Robert Whitaker won the Salzburg CSI4* Puissance later that year. Cisero is currently owned by side-saddle rider Susan Oakes, from Meath.

The Irish Horse Gateway team would like to congratulate the connections of Ardcolum Duke, Cisero, Limestone Grey and MHS Going Global on their international victories at the 2016 Dublin Horse Show and beyond.

For information on The Irish Horse Gateway please see www.irishhorsegateway.ie.

A Mighty Big Win for Chandler Meadows and Christy JNR in...