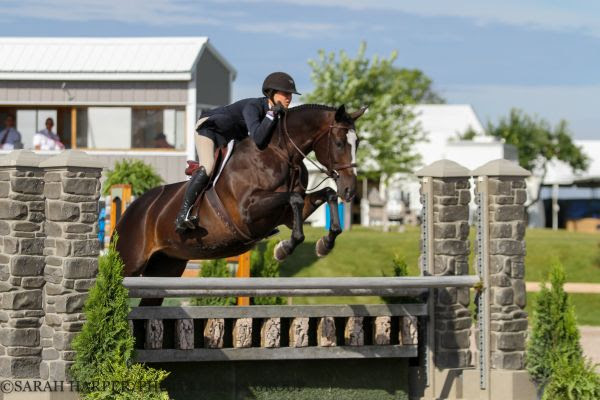 On Friday, the R.L. Polk Family Main Hunter Ring was host to the division championships for Junior and Amateur Owner Hunters. The junior riders showed off their talents in the hunter ring, but many have been putting in time in the jumper and equitation rings as well and are preparing for Saturday’s $25,000 USHJA International Hunter Derby presented by the Gochman Family and Baxter Hill Farm.

In the Junior 15 and Under Hunter division, the championship cooler went to Rachel McMullen and Clear Sailing, a 9-year-old mare owned by Redfield Farm. The reserve champion was Sloan Hopson and Coachella, a 14-year-old warmblood gelding owned by Avery Griffin.

McMullen was multi-tasking on Friday, taking third place in the W.I.H.S. Equitation Jumper Phase and fifth place in the Hunter Phase. The 15-year-old also has her sights set on Saturday’s $25,000 USHJA International Hunter Derby presented by the Gochman Family and Baxter Hill Farm.
McMullen praised the horse show and her experience competing in all three rings. “This is actually my second year back here but my first time with the new management,” McMullen said. “I show in all three rings, so it’s been great. Exhibitor services are amazing, the rings have been great and I’m just really thrilled with how it’s been going. I’ll be doing the equitation and hopefully the international derby tomorrow night and some of the jumpers too.”
She was thrilled with her Thoroughbred-cross mare Clear Sailing’s performance on Friday morning. “She was exceptional today,” McMullen grinned. “She’s a bay mare, so she has your typical bay mare attitude, but she tries really hard. She has an amazing jump and a really huge stride. She’s just a top quality mare.”
McMullen was not the only busy junior rider winning championships on Friday. In the Junior 16-17 Hunter division, Cole Battershall and Rogelio, a 10-year-old Dutch Warmblood gelding owned by Rolling Acres, took home the tricolor. The reserve champion was Emma Lena Green and Hennessy, a 10-year-old Oldenburg gelding.

Battershall had two horses in the division and was happy with both of their performances on Friday. “They are two completely different horses,” Battershall explained. “Rogelio I have to ride a little bit different than Foremost. Foremost is pretty young, so I was really happy that he got a first today. They were both really really good this morning, I was really happy with them. Rogelio is your basic hunter, he needs more of a looser rein, he jumps really well, he’s all around perfect for the hunters.

Batershall is another junior rider who will not just be sticking to the hunter ring. “I’ll be in the jumper ring, doing the modified jumpers,” she explained.  “I did the Pessoa and the Maclay yesterday. So I’m pretty busy in all three rings here. This is one of my favorite horse shows. I love it here and every year we seem to have a good year.”

Alliy Moyer and Carlson, a 12-year-old Hanoverian gelding, were the champions in the Amateur Owner division. The reserve champion Susan Baker and Q, a 10-year-old warmblood gelding.

Moyer was pleased with her ride on Friday. “He was great,” Moyer smiled. “He’s a professional by now, he’s 12 years-old. He’s just very consistent, if I ride well then he always performs to his best.”

The pair have a solid partnership that is a joy to watch. “I’ve had him for six and a half years,” Moyer explained. “We pretty much know each other, and know what the other is thinking. I can do whatever I want and he’s like ‘OK sure Mom’.”

Moyer enjoyed the Thomas Hern Jr. designed course. “I thought it was really nice,” she said. “I love being out here, it’s so open and the lines are long and very flowing.”

For Sophie Michaels, equitation is the basis of her success in both the hunter and jumper rings, proving that practice makes perfect during the Great Lakes Equestrian Festival. On Friday, Michaels took the win in the USEF Platinum Performance Talent Search 2*, as well as the W.I.H.S. Equitation, capping off the trifecta of equitation wins during the series one finale week after taking the first place in the USEF Medal Thursday.

The USEF Platinum Performance Talent Search 2* is one of the most esteemed equitation classes in the nation, originally conceptualized to play an important role in the pipeline of show jumping, as it addresses that form follows function, and that in order to be an effective jumper rider, one must possess basic equitation skills and a solid jumper seat position.

With three levels of competition, the two-star course, designed by Bernardo Costa Cabral, was set to 1.15m-1.20m, and challenged riders with 15 efforts, including a water jump with a rail, a liverpool, three double-combinations, rollbacks and a tight time allowed of 79 seconds.

Eventual winner Sophie Michaels said, “I think [the USEF Talent Search Program] is really great because equitation, in general, helps me with the jumpers. The USEF Medal/Maclay is a little more hunter-based. Having the choice to compete in equitation classes that are more aimed at the jumpers gives technical courses that are similar to that of what you would see with even bigger specs. It isn’t necessarily about looking pretty, but about the ride, function and position. I think it is a good stepping stone and foundation.”

“I think that what is really helpful about [trainer] Andre [Dignelli] is that when we are at home we practice with tough and technical courses. I think that helps me a lot because when you come to the show it is never something you haven’t seen before,” Michaels said. “It is never harder than what you have already practiced. We are always working on our positions in any ring-jumper or hunter. He is a great trainer and teacher.”

Michaels is seasoned when it comes to the USEF Talent Search, already having cultivated 95 points in both the East and West divisions. She is currently aiming for the Finals, held in Gladstone, New Jersey, at the historic Hamilton Farm, home of the United States Equestrian Team Foundation. The Finals are set to take placeOct. 7-9.

With dexterity, accuracy and form, Michaels topped the leaderboard after the jumper phase, and then sealed the victory during the flat phase, where judge Scott Hofstetter tested the competitors extensively. He asked that riders exemplify lengthening of stride at the trot and canter, as well as the keeping the counter-canter at both directions in the large grand prix ring.

“I have had [Carlo] since this winter, and he has really come a long way,” Michaels smiled. “He came from Europe, where he was a jumper, and since WEF we started doing the equitation. He has gotten so much better with the flat, before he thought it was a victory gallop [laughs]. He is a really good horse, super careful and a great water jumper. He is super fun to ride. It is really a feeling going in on one of these classes with him.”

The W.I.H.S. Equitation has become the proving ground for future grand prix and Olympic riders, with names such as McLain Ward, Christine McCrea and Kent Farrington. Michaels aspires to one day join the Team USA ranks, riding for her country, but for now she is focusing on how to transpire all she learns from equitation into the jumper ring.

“I think that the equitation and learning timing and body control is really helpful in the jumper ring,” Michaels said. “Your horses will want to jump more clear rounds. I think that doing these classes will help me to reach my goals.”

Aboard her second mount of the morning, Acortair, Michaels took the top spot during the W.I.H.S. Equitation Jumper phase. She rode to the score of 88 points in 70.890 seconds. Farish clinched the second place with 85 points, while Emily Perez finished third with 81 points.

The W.I.H.S. Equitation Hunter phase continued in the afternoon as the 17 contenders gathered at the Polk Family Main Hunter Ring. Although Michaels held the first place position, she knew that ranking could change in a matter of moments. It was only the day prior that she took the first place finish during the USEF Medal with Acortair, after testing with the top four and impressing the judges.

Even with a target on her back, Michaels stayed confident in both her and Acortair’s abilities throughout the hunter course, designed by Tom Hern. It paid off as she once again finished in the first place with a score of 87, capturing the win with an overall score of 175 points.

There was an upset in the ranks after the hunter phase concluded. Emily Perez moved from the third place to the second place with her scores of 81 and 85, while Farish lost her hold on the top three, with Isabella Russekoff moving in to round out the top three with the overall score of 157 points.

Competition at the Great Lakes Equestrian Festival will continue through the weekend, with Week IV concluding on July 31. The highlights include the $25,000 USHJA International Hunter Derby, sponsored by the Gochman Family on Saturday, July 30, as well as the $50,000 Flintfields Grand Prix, sponsored by Meijer, on Sunday, July 31.

Horses are not the only form of entertainment lined up for this year’s Great Lakes Equestrian Festival. The festival has teamed up with top musicians and entertainers from around the country to offer fun-filled evenings for this year’s concert and dinner series.

The Summer Evenings at Flintfields continues, the Paella Dinner and Farm Feast, as well as a 6 p.m. performance by Josh Davis Trio with Nik Carman, hosted byPorterhousePresents.com. The fun continues on Sunday with the “JustWorld Cheers for Change” and the JustWorld Horseless Horse Show, which will run from1-4 p.m., and is only $15 to compete. The finale of the first summer series will feature the Gochman Family Ice Cream Social and a Grand Prix Lunch in the Raymond James VIP Tent.

Please refer to greatlakesequestrianfestival.com for hotels, campgrounds and home rentals.