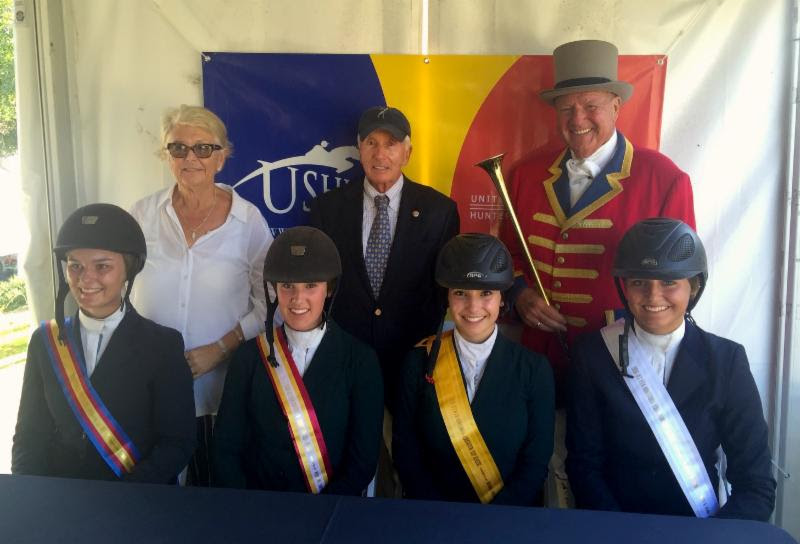 The US Junior Hunter National Championships, a three-phase event, started on Monday with the Over Fences Classic Hunter phase, followed by the Under Saddle phase and Over Fences Handy Hunter phase on Tuesday. The USHJA Hunterdon Equitation Cup Classic took center stage in the Grand Prix Field on Monday afternoon where riders were put to the test over two rounds and a challenging work-off of the top 6.

Fanfare included Ringmaster extraordinaire John E. Franzreb III of New York sounding the call for the start of each class. Known across the country for his talents, Franzreb added color to the gorgeous field.

Lott, trained by James Hagman, Katie Gardner, Javier Abad and Kay Altheuser of Elvenstar Farm, rode consistently over the first round, the handy round and in the work-off to lead with scores of 88, 85 and 85, respectively.

Just three points separated the top five riders after Round I. The top 20 riders from Round I returned in reverse order for Round II to jump Joe Lombardo’s challenging but fair handy course, which included an oxer to vertical in-and-out and a vertical on the bank of the Del Mar Horse Park grass Grand Prix field.

After Round II, Judges Michael Page and Bobbie Reber then put the top six riders to the ultimate test in the work-off, asking riders to swap horses (as the specifications require) and remove their stirrups before warming up their new mounts – without assistance.

Judges Michael Page and Bobbie Reber were quite positive about the quality of riding.

Page said to the work-off group, “That was impressive, as you all sort of maintained that level of riding on different horses without your ‘pedals,’ and it didn’t look any different. And it’s only because you all ride well. That is a real compliment to your trainers, and a compliment to what you have worked hard to become. It was very, very nice.”

Bobbie Reber also commented accordingly. “What we liked about [the work-off] was that Kayla led right off the bat; she came in, picked up the gallop and carried it all the way through,” Reber said. “It was very obvious that Grady had the hardest horse. Right from the very beginning we thought ‘boy, she’s doing a very good job on a very hard horse.’ And then what we really enjoyed was that Nina did such a good job in the work-off [on Lyman’s mount Avinjo B].”

“I really loved the Hunterdon Cup because of its uniqueness,” said Lott. “We don’t really have anything like it on the West Coast, so it was really amazing to have a new class to shake things up. I’ve always enjoyed watching riders switch horses and have to quickly figure them out, so being a part of it this time was really exciting.”

About the horse she rode, Lott said, “Vancouver is the king of the barn and also one of the sweetest. Everyone knows him and he’s definitely a favorite. He, like any other horse, has his quirks at home and he keeps you on edge, but when he gets to a horse show, he knows. He remembers everything and does nothing but please.”

Rombauer’s 16.1 black Czech Warmblood gelding, Gaston (Grand Step x Odra), took the title of Best Equitation Horse, awarded by the judges after solid trips with Rombauer in Rounds I and II, and with Williamson in the work-off.

The judging panel of Michael Page, Bobbie Reber and Jim Zulia first scored the competitors on Monday as they competed in the Over Fences Classic Round. The second phase commenced Tuesday morning with each horse receiving a score from the judges in the Under Saddle; the third and final phase, which consisted of the Over Fences Handy Hunter concluded the championship. Giavanna Rinaldi and Social Hour posted the best overall score of the 3’6″ section to claim the 2016 3’6″ Grand Champion title. In the 3’3″ section, Stella Buckingham and Luisant earned the 3’3″ Grand Champion honors.

Rinaldi (Wayne, IL) and Laura Strasburg’s Social Hour, a nine-year-old Warmblood gelding, earned the 2016 National title and the Monarch International Trophy donated by Show Circuit Magazine, after winning the Classic Round with scores of 88, 90 and 85, earning fourth in the Under Saddle phase and then once again topping the division with Handy scores of 87, 86 and 81. The talented pair also earned the Large Junior Hunter 16-17 crown, taking home the Magic Word Perpetual Trophy, donated by Karen Kay.

“Social Hour, also known as Oscar, performed his best both days and in all the classes. He felt amazing and jumped incredible,” Rinaldi said. “I feel like we really shined in the first round. He jumped super; he’s such a smooth horse to ride and we really clicked this week. He flatted very well too and got a good ribbon. He’s the perfect hunter ride; he’s smooth, jumps beautifully, and is very careful. I’d like to thank Laura Strasburg for letting me ride him and Bridgeport Farm as well.”

“Everything went beautifully these past two days,” said Social Hour’s trainer John Bragg. “Social Hour and Giavanna [Rinaldi] rose to the occasion. It was exciting for us all, including Brooke [Morin] and Laura [Strasburg].”

Zulia noted that all of the 68 entries were of outstanding quality. He was particularly enamored with Social Hour, who consistently placed in the top of his scoring.

“Mares as special as ‘Daisy’ (Small Collection) are a rare find she was as sweet as she was talented,” said Reilly. “We miss her and are pleased to award a kind, caring rider like Katherine this honor for riding Verdana.”

Buckingham and Luisant (owned by Q of E Farms, LLC)  moved up from ninth to first with top performances in the 3’3″ Section A on day two, earning them Overall Grand Champion honors. Buckingham and the nine-year-old Hanoverian gelding placed ninth in the Classic Round, and were second in the Under Saddle phase, moving them to fourth overall before the Handy Round. With excellent scores of 86, 89 and 86 in the Handy, the pair finished at the top of the division.

“My horse was amazing. I was nervous both days, but especially Monday [for the Classic Round] because neither of us had been out on the Grand Prix field. It was so big, but we got going and he jumped it perfectly which gave me confidence,” Buckingham explained. “In the hack, he had his ears forward and was listening to me and looking beautiful. I was happy but surprised that we did so well since it was such a big class. I learned the handy course then walked it with my trainer Katie [Gardner], and she wanted me to take all the inside turns. She said, ‘You can turn to the inside if you want to win, or go around if you want a safe, smooth round.’ I wanted to win so I took the inside turns. I was nervous again after waiting around all day but got in there and got going; the nerves faded away by fence three and we had a great round.”

Grace Pearson (Seattle, WA) partnered with Highland Horses, LLC’s 13-year-old Warmblood gelding, Cambiaso, to earn the Reserve Overall Grand Champion in the 3’3″ section as well as the top score in the 3’3″ Section B.

To read the full press release including all division winners, please click here.

ABOUT THE US JUNIOR HUNTER NATIONAL CHAMPIONSHIP

Established in 2001, the US Junior Hunter National Championship showcases the best junior hunters in the nation while providing riders opportunities to meet and spend time with competitors from all over the country. Each year, more than 700 eligible hunters qualify to compete in the prestigious final which is held over two days and is comprised of three phases: handy hunter, classic, and under saddle phase. The highest cumulative score for all three phases determines the ultimate winner. In 2014, the new 3’3″ Junior Hunter section was added to the Championship.
ABOUT INTERMONT EQUESTRIAN AT EMORY & HENRY COLLEGE

Emory & Henry College, located in the Highlands of Southwest Virginia, is home to Intermont Equestrian, a competitive riding program, and a premier four-year equine studies degree. It is the goal of both programs to prepare future horsemen and horsewomen for lives of leadership – in the equine industry or in other fields. The competitive program sponsors teams in the IDA, IHSA and ANRC. The equine studies curriculum offers a broad range of courses in teaching, horse show/stable management, anatomy, first aid and equine nutrition. For more information on Emory & Henry’s equine programs, visit www.ehc.edu/equine.