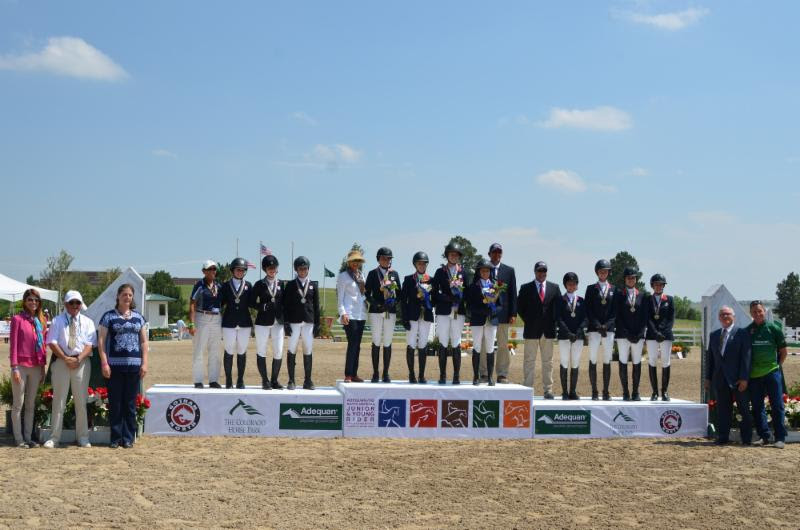 It was down to the wire in the Young Rider Team Championships with teams waiting until the final ride in the second round to find out who would take home medals.

Zone 4’s Sophie Simpson answered the question with her second clear round of the day aboard Simpson Show Jumping’s Why Not.

Simpson was part of the gold medal Zone 4/7 team that also included Zone 7’s Hannah Donald on her horse Hector, Alexandra Ozymy aboard her horse Curtis 57 and Nicole Peterson riding her horse Fast Flo. The team finished with zero faults after the second round, and was excited for the win.

All of the Zone 7 riders were holding their breath watching Simpson’s final round.”I think it still hasn’t really set in,” Peterson said about winning gold. “We went in doing our best, I think it makes me more nervous to watch the teammates go than me, but when we found out we won we were jumping up and down hugging each other, but it really still hasn’t set in that we actually did it.”

“We were watching her go and honestly sitting there riding for her,” Ozymy said. “It was just an incredible moment, and it’s still really cool.”

Simpson said that her goal throughout the day was to focus on two solid clear rounds. She wasn’t sure the team had won until after she was done.

“I don’t like to know too much going in,” Simpson said. “I like to keep a clear head and you just have to jump each jump for what it is. I had no idea where we were standing or anything so when I pulled up after the last jump I know I had put in two good clear rounds and hoped I would hear that we won the gold.”

“It’s been a great experience for me as a rider to be able to jump several days in a row and learn from each experience,” Firestone said.

Zone 10’s Mackenzie Drazen on her horse Waliba VDL, Hannah Heidegger on Monarch International’s Rodster D’Amaury, Chandler Meadows on her horse Carletto and Uma O’Neill on her horse Clockwise of Greenhill Z, brought home the bronze medal, under the leadership of Chef Morley Abey, with 12 faults at the end of both rounds.

The teammates, all from California, have enjoyed the camaraderie of the Championships.

“I think that’s one of the special things about this event,” Drazen said. “You do get to ride on a team.”

Riding on a team also created positive pressure to have a good round, according to Heidegger.

“I think that really helped contribute to my clear round in the second round because I felt so backed by all these girls, that I could really do it and I could pull it out for everybody,” she said. “It’s so much fun to compete with your friends.”

The Mexico North team, under the leadership of Chef Mauricio Guerra, hung onto the lead in the second round to earn the gold with two clear rounds and only four faults, despite the anchor rider having an equipment malfunction and having to pull up.

“In the second round the rein popped out in the middle of the combination,” del Castillo said.

Del Castillo said he was disappointed that he had to pull up but glad that the team still won gold.

“It was really fun, winning the gold medal meant a lot to all of us, we worked hard to get here,” he said.

“I am very happy with how we ended up,” Hutchins said about the Championships. “I think we all relied on each other.”

Hutchins said the team has gotten to know each other since the NAJYRC California trials and felt they had a strong team.

“It’s such a great experience; we’re all able to rely on each other and help each other out,” she said. “It puts the pressure on some of us, but we’re all there for each other, and I think that’s great.”

The three-member Zone 2/9 team, including Zone 2’s Lilly Higgins riding her horse Zinnia, Lucy Matz aboard Janice Aron’s Bailey and Zone 9’s Megan Hilton on her horse Washington, stayed consistent in the second round to earn the bronze medal with a total of 32 faults. They were led by Chefs Cara Anthony and Ralph Caristo.

Matz went double clear to help the team earn the medal, and said she has enjoyed being part of a team.

“I think it’s just a great opportunity to come here and be able to compete on a team because a lot of time riding feels so individual,” Matz said. “So to rely on your teammates and know you have that support has just been really special, and it’s just a great way to get sort of that taste of international competition.”

Manuel Esparza of Mexico designed the course for both days of the competition, which is held in a Nation’s Cup format.

“I thought it was a very nice course,” Firestone said about the Young Rider course. “It wasn’t built too big and complicated. The main thing we had to focus on was the angles to the jumps and getting straight.”

“Today when I came out and walked the course, I actually was a bit nervous,” Laughlin said. “This is a solid 1.40m, the course was very, very well-designed. I thought it asked a lot of questions especially after the water.”

More than 40 athletes participated in the Junior and Young Rider Team Championships at The Colorado Horse Park, and riders were pleased with the venue.

“It’s awesome being here in Parker, Colorado,” Peterson said. “I think they did a really great job here. We have a great crowd and it’s really an awesome experience over all.”

Individual Championships will continue Saturday and Sunday for Young Riders and Juniors, respectively.

USHJA is proud to be the presenting sponsor of Show Jumping for the Adequan FEI North American Junior and Young Rider Championships, presented by Gotham North, and recognizes the importance this program plays in the development of our sport’s future top athletes.