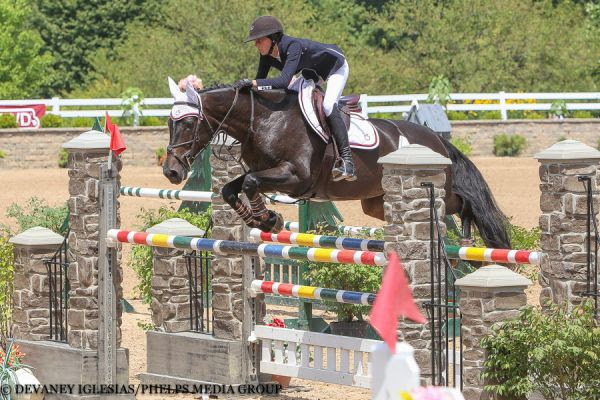 Wayne, Ill. – July 31, 2016 – Annabella Sanchez closed out the first week of the Chicago Festival of the Horse on a high note. The young athlete not only competed in her first junior classic, but also rode away with the victory aboard her 11-year-old Dutch Warmblood, Zersina.

Sanchez had two mounts entered in the $7,500 Cavalor Show Jumping Hall of Fame Junior/Amateur-Owner Classic, and earned the highest of honors on both of them. After winning the highlight event aboard Zersina, Sanchez took home the division champion with 19 points, and just three points behind, was Sanchez and her second mount, Zanta Fee Van T Hofterrijckel. The pair earned the reserve championship with a total of 16 points.
“I’m so excited and happy, because it’s my first time showing in the juniors,” Sanchez expressed. “I didn’t completely expect the outcome. I was just going for two clear rounds, but I’m also really competitive. My trainer has to tell me to slow down and remind me that I have to go clear. I’m so happy that I won. I’m really proud of both of them, they really tried their best.”

Sanchez was only able to qualify for the jump-off aboard Zersina, lowering the height of the sixth obstacle aboard Zanta Fee Van T Hofterrijckel during the first round. Zersina and Sanchez were able to produce a second clear effort during the tiebreaker, crossing the finish line in 39.584 seconds, just a split second quicker than Kelsey Thatcher and Chaviana’s time of 39.662 seconds.

“Zersina is so honest and great,” Sanchez said. “She’s very smart. I can always depend on her to help me if I need it.”

Sanchez ended the day with two tricolor ribbons and a first- and third-place finish, as Zanta Fee Van T Hofterrijckel was the fastest of the 4-faulters.

While Thatcher settled for a red ribbon in the Junior/Amateur-Owner class, she had earned a victory just an hour before in the $1,500 NAL Low Junior/Amateur-Owner Jumper Classic. Aboard Stella Luna, Thatcher had a two-second margin over her other mount, Hannah to claim the top two spots on the leaderboard.

Thatcher had double-clear rounds on both her horses. While Stella Luna clocked in at 38.104 seconds, Hannah finished in a time of 40.068 seconds.

“Stella Luna jumps better, higher and pays more attention the faster you go,” Thatcher said. “She’s always there for you and has a great little motor. She’s really fun.”

Sanchez and Thatcher have been showing at Lamplight Equestrian Center for multiple years.

Sanchez shared, “I’ve been showing here since I was 8-years-old. I think the arenas are great. I like seeing people that I’ve shown with since I was younger. The atmosphere is amazing and all the people here are nice. It’s really fun. ”

With similar sentiments, Thatcher expressed, “This is my ninth year showing here. The Jayne’s Farm [Our Day Farm] is only 15 minutes away. It’s great to have a world-class facility in your backyard.”

Taylor Johnson Closes Out Lamplight Debut with Junior Hunter 3’3″ Championship
The SmartPak Grand Prix arena kicked off with the $500 Low Child/Adult Jumper Classic Sunday morning. Sixteen athletes took on the course and nine qualified for the first jump-off of the day.

Molly Shapiro and Iris had the quickest double-clear round of the class. The rider-and-horse duo earned the blue ribbon with a time of 38.553 seconds. Just a second behind Shapiro was Amelia Jenson and Luc, who settled for second place with a time of 39.145 seconds.

Following the first class of the day was the $1,500 WIHS/NAL/M&S Child/Adult Jumper Classic. Jane Gemellaro and Mr. Brightside edged out Heidi Schuessler and Fly Away by less than a second for the victory. Gemellaro crossed the finish line in 41.187 seconds to beat Schuessler, who clocked in at 41.946 seconds.

The two were awarded with tricolor ribbons and champion and reserve honors for their week’s performances. With a total of 13 points, it was Schuessler who rode away with the title of champion, while Gemellaro came in two points behind to earn the reserve championship with a total of 11 points.

The morning continued with the $1,000 Modified Junior/Amateur Jumper Classic. Although Lauren Hall and Grandis Van T Heike had the fastest time during the jump-off, finishing in  39.380 seconds, they would settle for the red ribbon after incurring 4-faults. Angelica Allegro and Vespringt secured the win with the sole double-clear round and a time of 44.800 seconds.

To close out the first week at the Chicago Festival of the Horse at the Lamplight Equestrian Center, junior riders took to the main hunter ring to vie for a shot at the tricolor. Taylor Johnson and Cavalli had their Lamplight debut this week, finishing strong with a championship win in the Junior Hunter 3’3” division.
After watching her brother compete at the Lamplight Equestrian Center last year, Johnson knew that she wanted to bring a horse to compete this year. She and her own Cavalli kicked off the Junior Hunter 3’3” division with a third and a first during the first portion on Saturday, July 30.

During Sunday’s portion of the division, Johnson and Cavalli received two firsts and a second, including a win during their handy round. The pair navigated the rollbacks and trot jump with ease to clinch the championship.

“Cavalli was wonderful!” said Johnson. “He was just very good! He doesn’t trot jumps very well, so I just figured I’d turn sharp to it and see what happens. He was really good about it!”

Johnson trains with Catherine Rinehart, and has been training with her for years. Johnson’s strategy for the class was solely to enjoy it, and she explained, “Catherine just said to go out and have fun!”

Johnson commented on her first week competing at the Lamplight Equestrian Center, saying, “It was awesome! It’s my first time here this week, and I don’t know if we’ll be back next year, but I really hope so!”

Reserve champion in the Junior Hunter 3’3” went to Andrea Stout riding her own Let’s Talk. The pair’s winnings totaled a first, second, fourth, fifth, and seventh to earn the reserve tricolor.

Giavanna Rinaldi continued dominating at the Chicago Festival of the Horse in the Large Junior Hunter division riding Bugsy Malone, owned by Alex Jayne. Rinaldi is a local regular at Lamplight, and has been competing at the grounds with trainers Maggie, Charlie, and Haylie Jayne for years.

“It’s been a really good week!,” said Rinaldi. “I’m pretty much just going from class to class, but I’m always so excited. Every horse that I ride is another chance and I really enjoy going from ring to ring.”

Rinaldi almost swept the division, earning four first place ribbons and a second place. She has had an exceptional week at the Chicago Festival of the Horse, winning the WIHS Equitation Hunter phase, the $50,000 Finish Line Grand Prix, as well as earning countless ribbons throughout her other divisions.

Reserve champion in the Large Junior Hunter went to Stone McCormick aboard the MTM owned entry, Viceroy. McCormick and Viceroy earned four seconds and a third over the span of the division to finish with the reserve champion.

The second week of competition, Equifest II, will have several prominent events to watch, beginning with the $25,000 Welcome Stake on Thursday. Friday will be the second National Hunter Derby of the competition, and Saturday will feature the highly anticipated $75,000 Grand Prix. On Sunday the Hunter and Jumper divisions will partake in a $25,000 Derby.
Competition for week two at the Chicago Festival of the Horse at the Lamplight Equestrian Center kicks off on Tuesday, August 2, beginning at 8:00 a.m.