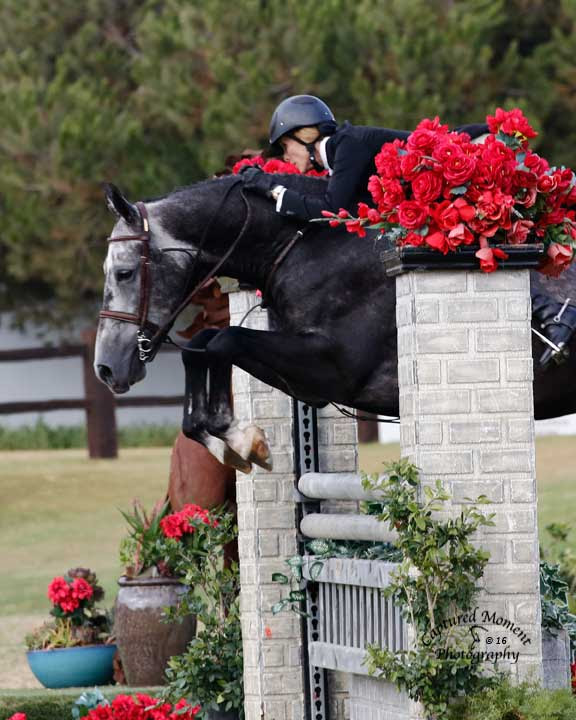 July 31, 2016 – Del Mar, CA – After a victory on this same field in May at the Showpark Ranch & Coast Classic, Jenny Karazissis and Legacy, owned by Emily Sukert, continued their winning streak in this weekend’s $15,000 USHJA International Hunter Derby. On a gorgeous Saturday at the Showpark Racing Festival in Del Mar, the honorable Michael Page and Robin Swinderman judged as Panel One, with Carol Dean Porter and Andrea Meek sitting together as Panel Two.

The first round track, designed by Joe Lombardo, included four solid high options, with ten efforts in total. The line from fence seven to eight was a challenging white wall to a hay bale option of 4’0″ or 4’3″. Seven of the entries took all four options, including Karazissis on her first mount, Briana Sukert’s Nonchalant. This pair led the class with a score of 167, until Karazissis came in on Legacy, finishing with a 169 total. After the Classic Round, Karazissis was sitting pretty in first and second place on horses owned by the Sukert sisters. She also piloted Pam Stewart’s Durango to third and Amy Gallagher’s Zion to eighth, returning with four for the Handy Round.

The Handy Round was a winding track with ten challenging obstacles, beginning with a bending line of options – an oxer at fence one and the hay bale jump as fence two. Next, riders galloped up the hill to the trot jump, back down the hill to a barrel fence off a left turn, a U-shaped rail vertical off a right turn and then a rollback left turn to a fan oxer. The final option was a vertical-vertical combination set off a right turn followed by a gallop down to the final square oxer.

Almost every horse shifted positions in the Handy Round, with the exception of Legacy, who led every step of the way.

Several moved up in the order, earning high handy scores. Jamie Taylor and Naomi Houillon’s Captain 33 moved up from fifth to second, and Michael Leon’s Nil Du Buffant Rouge jumped from sixth to third after their Handy Round.

Karazissis complimented the handsome dapple gray gelding. “I know he can make every turn that I need to make. He changes his leads on his own. He is super brave and very adjustable, so he is just lovely to ride.”Legacy lived up to his name when Karazissis showed how beautifully handy he can be, earning the top score yet again in the second round.

Congratulations also go to the other award winners recognized after the International Hunter Derby. The Equitex Trainer Award went to Mary Morris of Ivy Gate Farm, and the Balmoral Farm Owner honors were awarded to Emily Sukert.

US Equestrian Announces Participants for the 2022 Robert Dover Horsemastership Clinic...