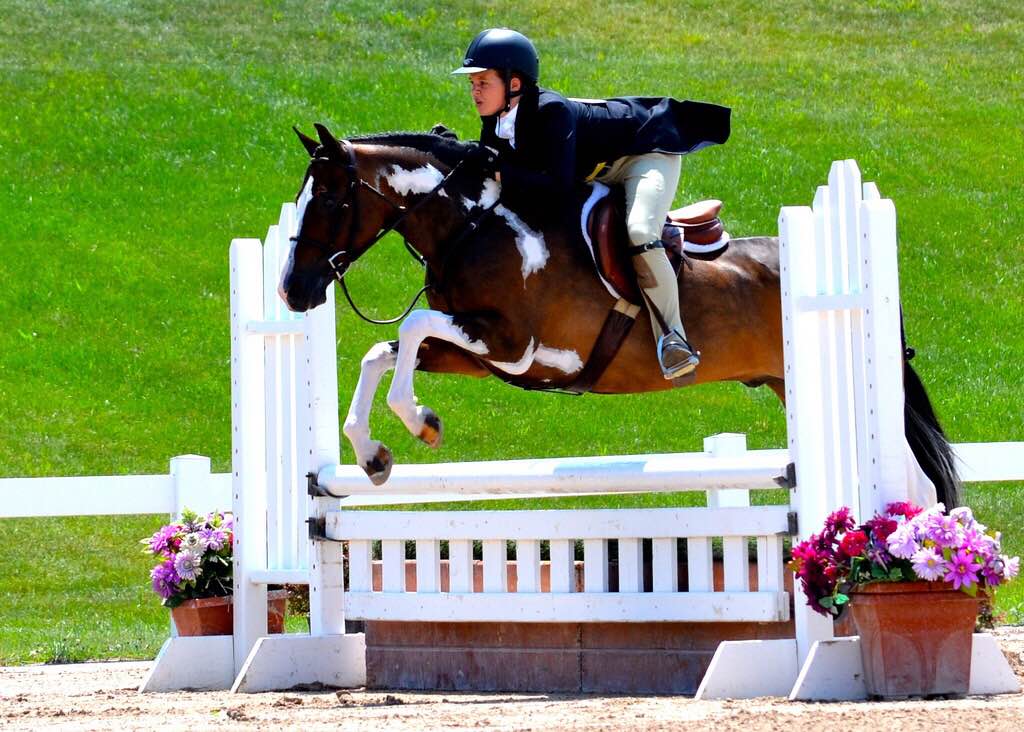 [ Above: Amelia Sawalich and Rockstar | Photo by Emma Wexler ]

Ten jumps and one score. That is all that the hundreds of kids at Pony Finals get to display how hard they have worked over the past year. Yet, the weekend is about much more than jumps and numbers. It is about the excitement of being with other young riders, the fun activities throughout the weekend, and the incredible learning experience. Fulfilling the dream of going to Pony Finals is not necessarily about placing in the top ten; it is more about the joy of competition and horsemanship.

Peyton Jelinek from Greenwich, CT, is going to Pony Finals this year to show in the small pony division with her pony, Clovercroft Love Bunny. She competed at Pony Finals last year and comments, “Even though I was nervous competing, it was a great experience.” Jelinek sees the event as more than just a competition, focusing on fun rather than the pressure of those ten jumps.

Amelia Sawalich, from Eden Prairie, MN, has been to pony finals twice with her ponies Caramel Crunch and Rockstar. She agrees with Jelinek saying, “I loved showing, of course, but I also liked hanging out with all of my friends and doing all of the fun activities.” The weekend is an experience that transcends the boundaries of the ring.

“Not every pony/rider team in the US gets to show there, so it is something I’ve been working towards since I started riding,” Jelinek explains. Pony Finals is a goal for many young riders, but not all qualify. Jelinek realizes that it is important to stay humble and appreciative of the opportunity to compete there.

Katana O’Brien, a trainer from St. Louis, MO, is a pony finals veteran. She usually brings three to five ponies there each year depending on the ebb and flow of pony riders at her farm, KEE, Inc. She comments, “Some people don’t have the opportunity to ride [at] Pony Finals. Some people get to show at those venues at a regular basis. So, Pony Finals is what you make of it. Some people only get to take lessons two days a week but others get lessons six times a week. It’s life.”

O’Brien sees pony finals as a learning experience to meet others and support barn mates. She emphasizes with her riders that it is a privilege to be able to show at the great Kentucky event.

She explains, “I also think that [my riders] should know that they’re not the only ones showing. I try and make them go up and watch and you can really learn by seeing what happens to other people.” To O’Brien, the weekend is far more than just ten jumps and one score. It is an environment full of learning, fun, and good horsemanship.

Jelinek has also received wisdom close to what O’Brien teaches, as she realizes the importance of supporting other riders rather than being entirely focused on herself. She says, “It was very fun and I loved supporting and cheering for my barn mates.” Furthermore, the learning experience at Pony Finals is unparallelled. By observing at the ring, riders can learn so much about how to ride the course and other riding techniques. “I learned a lot from attending a model clinic and watching the other riders compete and warm up,” Jelinek says.

O’Brien concludes by saying, “There’s a lot of luck involved… and you have to make the best of it. That’s how life is. You deal with what’s given to you, whether it’s the weather or maybe a person opens up an umbrella right before you go. You make the best of what hand you’re dealt and I think it’s like that at every single horse show.”

Pony Finals requires perspective: it is more than just the score one receives in the ring. O’Brien, Jelinek, and Sawalich view Pony Finals as an opportunity to grow as a rider and horseman–which is truly the goal of these competitions. Sawalich concludes by saying that she learned “to always have fun, never give up, and always finish what you start.” These three objectives embody the attitude necessary to compete at a national level, as it is not always about winning a blue ribbon.

Clearly, the learning and fun experiences do not stop when a rider exits the ring. It is essential to appreciate the other riders and the activities integrated into the week of competition. Often, the best part of Pony Finals is the community and the feeling that a dream has been achieved, whether or not you go home with blue ribbon. Sawalich concludes by saying that she learned “to always have fun, never give up, and always finish what you start.” These three objectives embody the attitude necessary for success in any endeavor.