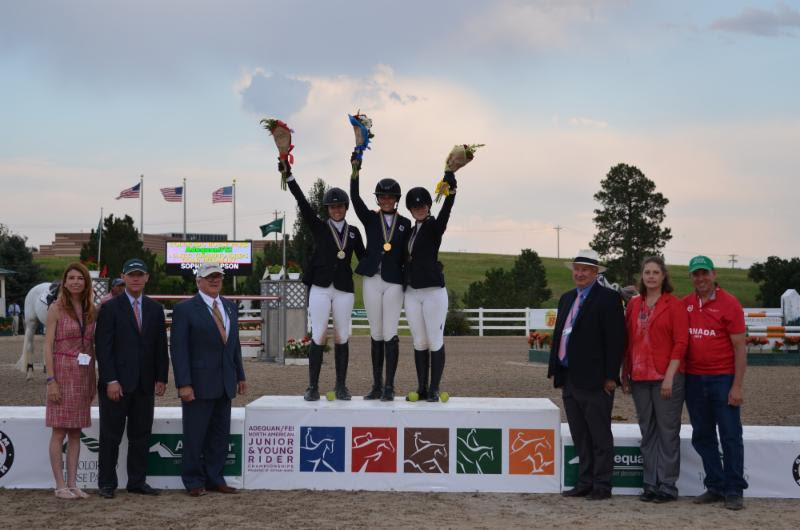 Riders from Zones 7, 8 and 9 also in the medals

Simpson, 17, of Wellington, FL, piloted Simpson Show Jumping’s Why Not carefully through the speed round, the two team rounds and two individual rounds without a single rail coming out of its cups. Zone 8’s Delaney Flynn, 15, of Scottsdale, AZ, had just 4.42 total faults to earn the silver medal, and Zone 9’s Jennifer Gates, of Medina, WA, took home the bronze with just 8.01 total faults.

“It’s not sunk in yet,” Simpson said about the win. “I was crying, my mom was crying, everyone was crying. It’s always been a dream of mine and always been something I’ve been after, double gold the same year and everything; for that to come true after coming here four times on the same horse and everything it really came together.”

This was Simpson’s first year as a Young Rider, but she’s competed in the Junior Championships the past three years. She said each year she improved and worked toward better rounds.

For Simpson, the key is focusing on one jump and one round at a time, staying calm and focused, and she doesn’t like to know where she stands. She was impressed with how her horse handled the weekend.”Five clear rounds, that’s, you know, crazy,” Simpson said about the feat. “When you sit in the stands and watch previous years, you think, ‘Wow, how can I get five clear rounds in a row out of a horse?’ After winning the speed I think she felt great, and I felt quite solid going into the rest of the weekend.”

“Why Not, she really, really rose to the occasion this week and I think she wanted it just as bad as I did,” Simpson said.

Flynn, aboard Jennifer Flynn’s Taxco De La Nutria, earned the silver medal with a total of 4.42 faults. Flynn said it is her first experience at NAJYRC, and she wasn’t expecting to medal.

“Just coming here as my first time I was just expecting to kind of learn about young riders, it’s different than any other competition that I’ve done,” Flynn said. “Coming here and actually medaling —–  silver with both my team and myself —–  is just amazing; it hasn’t really sunk in yet, but I am just happy with my horse and all the support that everyone has given me.”

Gates took home the bronze medal with a total of 8.01 faults with a rail in the speed round and one rail in the first round of the individual competition aboard her horse Luftikus S.

Gates said she was ecstatic to medal at the event. She made Young Rider Championships a priority for the year but was planning to bring another horse.

“To be sitting up here today I am really grateful,” Gates said. “The horse I was going to bring unfortunately wasn’t able to come so I brought a newer horse, but I was thrilled with him.”

All of the individual medalists also medaled in the Team Championships. Gates and Flynn were part of the Zone 3/8/9 team that earned the silver medal.

Simpson was part of the gold medal team along with Zone 7’s Hannah Donald, Alexandra Ozymy and Nicole Peterson.

The gold medal also earned Simpson a dunk in the water jump thanks to fellow competitors.

In the Junior Individual Championships, Olympian Michael Matz’s daughter Lucy, 17, of Coatesville, PA, aboard Janice Aron’s horse Bailey VI took home the gold medal. Matz’s final round was a nail-biter with a rail coming down at the last fence, but she could afford it and ended up with just 6.78 faults over the five rounds.

“It’s so surreal,” Matz said about winning the gold. “I didn’t expect to do it in quite the fashion I did, my horse has been amazing.”

Matz said she has only been riding Bailey VI for about a year and her brother showed her first. She said it took the two a while to get used to each other.

“She’s quite sassy,” Matz said. “She’s very focused most of the time and she doesn’t like to be messed with.”

And although Matz wasn’t originally planning to bring Bailey VI to the Championships, she said she has performed amazingly.

“I couldn’t have asked for much more from her,” she said.

Mexico North’s Carlos Hank Guerrerio, 16, of Mexico City, had just 8 faults over the five rounds aboard his horse Santos to earn the silver medal. Guerrerio was also part of the gold medal Junior Team.

Zone 7’s Brian Moggre, 14, of Flowermound, TX, on MTM Flutterby, owned by Major Wager LLC, came back after a stop in the speed round to earn the bronze medal with two clear rounds in the individual finals. Moggre ended up with 14.05 total faults over five rounds.

“When I found out I was bronze I was very surprised,” Moggre said.

Moggre said he had hopes to medal at the Championships but after his first couple rounds he didn’t think the podium was a possibility. MTM Flutterby’s final two clear rounds changed everything.

“She was amazing, and she was just jumping out of her skin,” Moggre said about MTM Flutterby. “I thought both of the courses rode really nice, and I really enjoyed it.”

Manuel Esparza designed the courses throughout the week, and the medalists were impressed with his work.

“I thought both of the rounds were really well done,” Gates said about the Individual Championship courses. “Manuel Esparza has done a great job all week. I think he challenged the riders enough, by having some tall, skinny jumps that were careful, easy to knock down. I thought he challenged us to a fair degree without making it too difficult for any of the riders.”

USHJA is proud to be the presenting sponsor of Show Jumping for the Adequan FEI North American Junior and Young Rider Championships, presented by Gotham North, and recognizes the importance this program plays in the development of our sport’s future top athletes.

Young rider scores mentioned in this press release are unofficial. Official Young Rider scores were unavailable at the time of publication but will be posted online at www.youngriders.org.