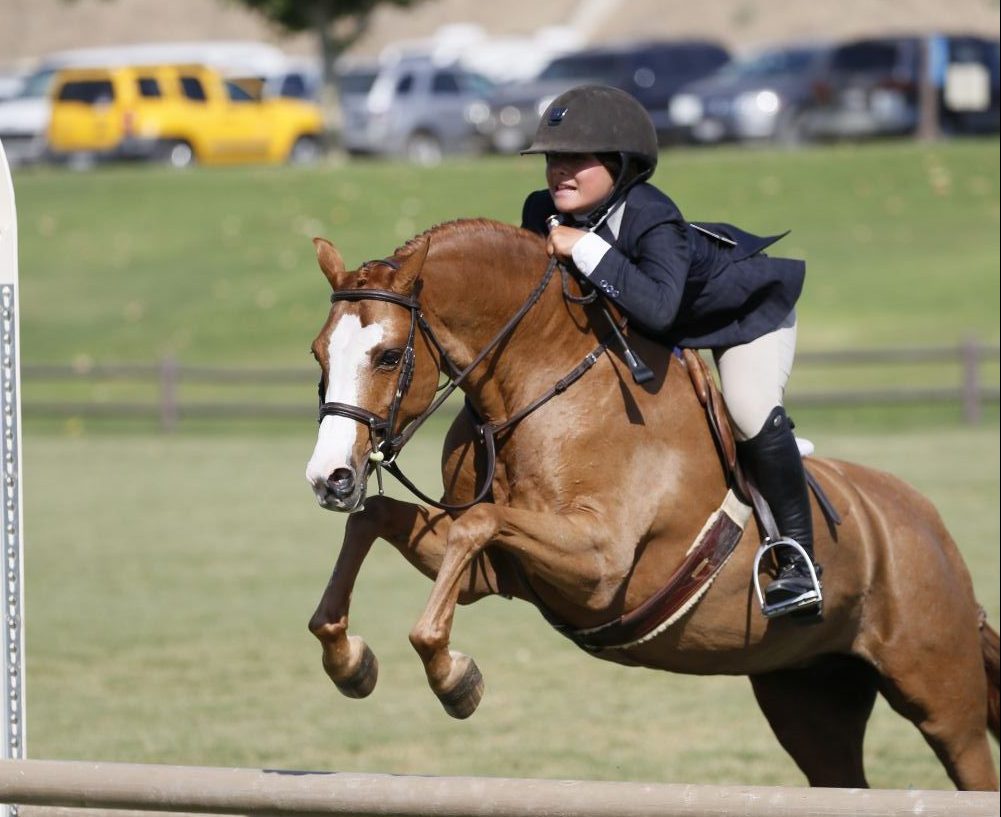 Augusta Iwasaki is a young rising star from Calabasas, California, who has already made a mark of success in the pony hunter divisions, The twelve-year-old talent trains with her mother, Liz Reilly, and well-respected hunter rider and trainer, John French, at Makoto Farms. She has been riding since she was four years old.

Adding another impressive title to her incredible show career, Augusta Iwasaki and Gail Ellis’ Spot On claimed The Plaid Horse Best Junior Rider Award, after competing in the International Hunter Derby at Blenheim.

“He is very sweet. He’s very adjustable and he is a really nice horse,” Iwasaki said of the eight-year-old Thoroughbred gelding, owned by West Coast Equine Partners, LLC.

The international hunter derby, which took place on the sprawling grass Grand Prix field, had a long list of top-notch riders entered. Thankfully, the California weather also cooperated. “It was in the late afternoon and the weather was pretty nice. Towards the end of the second round of the derby, it started getting a little bit cold,” she said.

Iwasaki was confident going into the derby as she had showed last year in the highlight event on one of her Junior Hunters, Illusion. Her other partners in the Junior Hunter ranks include Small Gesture, Small Affair, and Small Adventure.

“I thought the course was really fun. In the second round, there were a lot of places where you could be handy, so it was a lot of fun!”

Iwasaki, who reads The Plaid Horse magazine and is a huge fan, said, “It was exciting. There was a lot of people in that class and I was happy that I did as well as I did.”

When asked if she has any good luck charms that she uses, she said, “I have a belt that I wear. It’s from Kenya Collections. And I used to have a pair of lucky bows, but I don’t wear bows anymore!”

The future looks promising for Iwasaki and this summer season is packed with trips to exciting horse show venues, including West Coast U.S. Junior Hunter Finals, where she will ride Elusion and Small Affair. Then, she will travel to Kentucky for three weeks of shows, including the USEF Pony Finals.

She concluded, “And then I’m sure there’s some horse shows in between. Were also going to Indoors and Capital Challenge.”

When asked if she wants to show in the equitation, she said, “Probably, maybe. We’ll see. I want to do jumpers. That’s really fun.”

Whichever route the young equestrian chooses to pursue in the future, Iwasaki is sure to have great success on her different mounts thanks to her significant talent in the saddle and confident, charismatic personality.