Home Blogs Emma Seving: From Ponies to the Jumper Ring 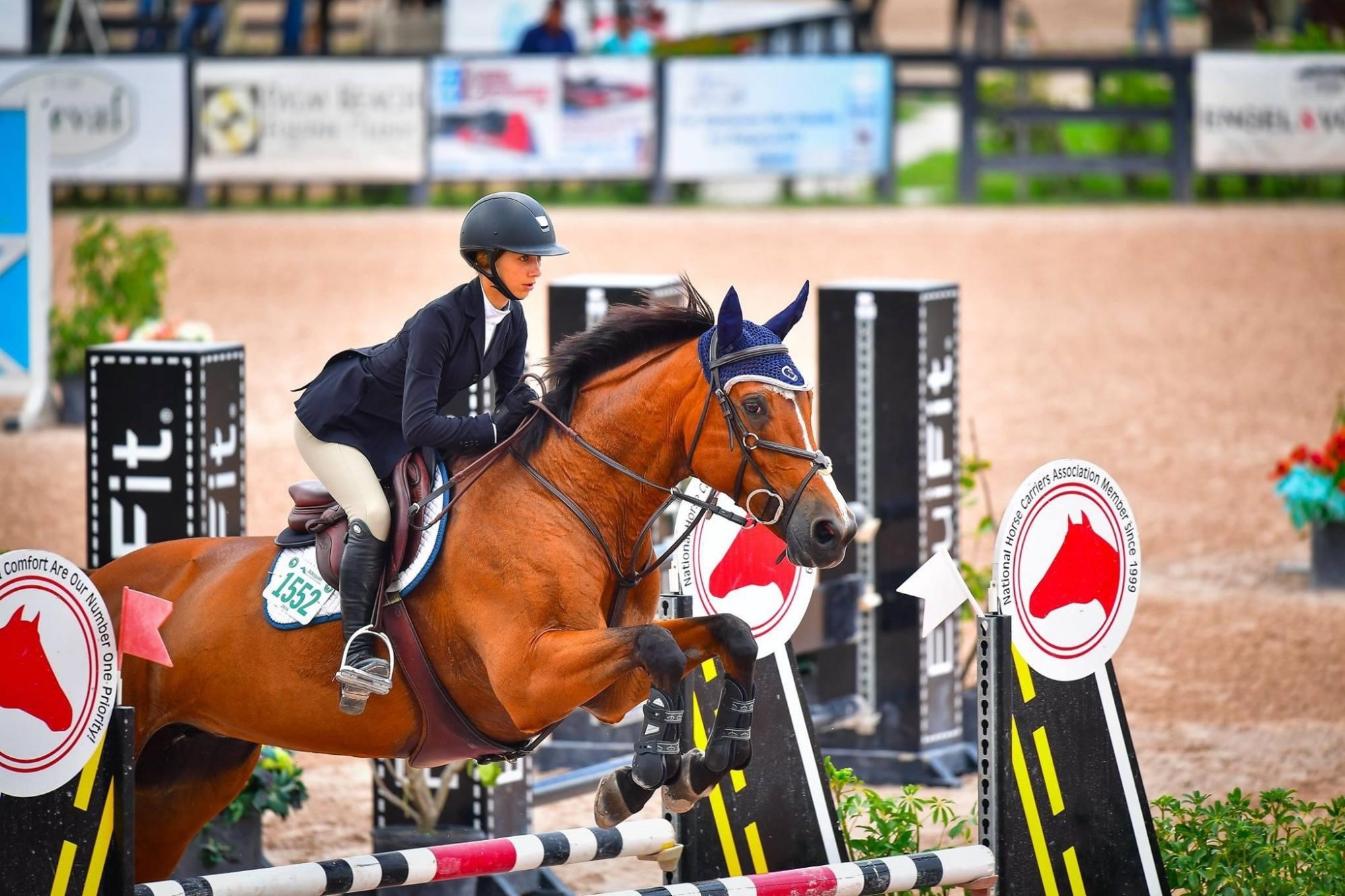 [ ABOVE: Emma and Mahogany | Photo by Peter Pham ]

Emma Seving’s name can be heard at a hunter, jumper, or pony ring throughout the country.  From ponies to horses, this 13-year-old has collected accolades at most of the major horse shows in the United States.

For as long as she can remember, Emma’s family has had horses. Riding is in her blood. It all started with her first pony, Aido. Aido did not have a fancy show name because he did not go to shows; Emma just rode him around the farm. Her first trainer, Christine Gardner, taught her all the basics. After she learned how to walk, trot, and canter, Emma moved to Sara Disque, who helped through her first years of showing. After Sara, Emma transferred to Madison Hills Farm, where she is currently trained by Mike Rheinheimer and Amanda Lyerly. “Madison Hills has impacted my riding and my life in so many different ways.” Emma has trained with Madison Hills for the past four years.

Emma’s first competitive pony was Grand Jete. Previously ridden by Parker Wright, Mimi Gochman, Lilli Hymowitz, and Emma Kurtz, Grand Jete collected wins at some of the biggest and toughest competitions in the U.S. Grand Jete and Emma’s partnership began at the Kentucky Summer Classic of 2013. Emma and Grand Jete placed 6th in the Pony Finals Small Pony Hunter Under Saddle in 2013, and went on to collect wins at WEF and Country Heir. Grand Jete took Emma to her first indoors and Devon, “taking care of her every step of the way.”

We all have that one special pony or horse, the one who got us to where we are today.  For Emma, that pony was Sassafras Creek. “Sassy” was shown to the 2013 Grand Championship at Pony Finals by Daisy Farish.  Soon after this success, Emma and Sassy began their two year partnership. “She taught me how to be confident every time I stepped into the ring. I honestly don’t think I would be the rider I am without her.” Emma and Sassy went on to earn wins at WIHS and Pennsylvania National Horse Show, and top placings at WEF and Pony Finals.

After Sassy, Emma transitioned into horses. For some people, the transition from ponies to horses is hard, but not for Emma. When asked  why, she replied, “I had really good, honest horses horses to help me through the transition and become confident. Being able to trust my horses made the transition a lot easier.” Emma was Circuit Champion at WEF this winter with her former children’s hunter, Mactier. She currently rides three horses, Mahogany, Easy Money, and Inside Scoop.

Emma shows in the 3’3 junior hunters with Inside Scoop, “Prince”, and describes him as “very spoiled when it comes to treats!” Her children’s jumpers, Mahogany, “Jenny”, and Easy Money,“Easy”,  both have very different personalities. Jenny is “very silly and likes to stick her tongue out over the jumps,” while Easy “is a sweetheart, yet very athletic.” Emma has already had much success with them, and is certainly not finished winning.

In the future, Emma would like to compete consistently at the Grand Prix level and eventually go to the Olympics. Keep an eye out for this young rider as she pursues her dreams.