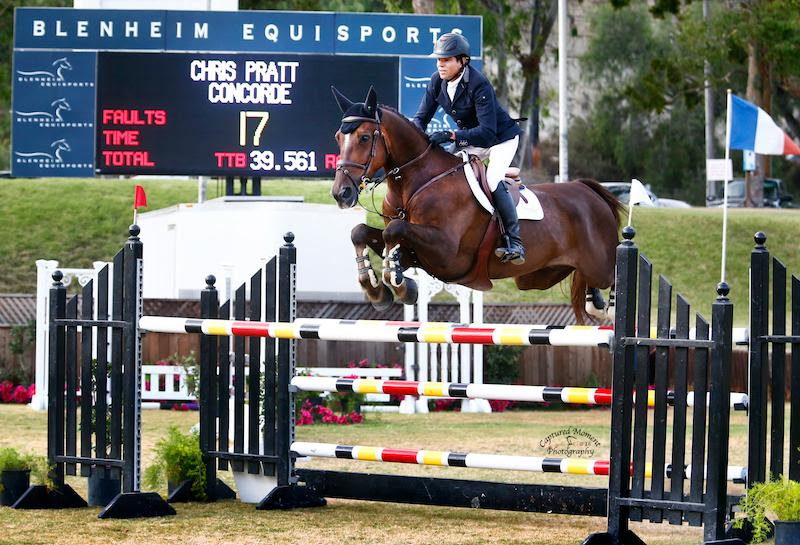 August 6, 2016 – Del Mar, CA – Canadian Chris Pratt claimed the top spot aboard Concorde in Friday’s challenging and competitive $25,000 Markel Insurance 1.40m Grand Prix. Pratt and the young, scopey chestnut Concorde (owned by Epic Group, LLC) were one of nine to return for the jump-off and one of three to be double clean, with an impressive time that could not be caught.

FEI course designer Ivan Tagle of Argentina asked the riders to negotiate 16 efforts in 80 seconds. “I tried to put everything into this 1.40m class – big spreads and airy oxers. I expect about 20 percent to go clean,” he noted. “I think the jump-off will be fun for the audience, and I hope it will be very exciting.”

Tagle was close with his estimate – of the 55 entries, nine went fault free. More than half of the class finished with time faults, and of those, eight completed the track with no rails but were over the time allowed.

Certainly exciting for all involved, Pratt commented on the course, “The first round was quite challenging with a short time allowed. The jump-off was fast with some nice roll backs.”

Colombian John Perez and Daniel Rihan’s Donanda came back first and set the pace with a clean jump-off round in a quick 39.56. Eighteen-year-old Maria Guadalupe Hank returned on Constar finishing with one rail in 41.59. Third to go, Pratt blazed through the jump-off track, leaving out strides easily with Concorde’s big step, setting the time to beat at 37.03, more than two seconds faster than Perez.

Six more riders made a galloping effort to catch Pratt.  Two entries were in the 37 second range on the clock, Perez on Daniel Rihan’s second mount, Chianti Classico, and Michelle Parker aboard Cross Creek Farm LLC’s Cupilor, but each scored four faults. Jaime Azcarraga and For Fashion were the only other double clean round, sliding in between Pratt and Perez for a second place finish in 38.07.

Of his jump-off round, Pratt explained, “I just wanted to go smooth and fast. I think every class with this horse is still a learning experience. He needs to learn to go fast and to turn. I didn’t want to do anything to jeopardize his confidence, but he needs to know that even at the top level, he has to think fast on his feet and really focus on the jumps.”

Pratt and Concorde were in the Markel Insurance 1.40m Grand Prix Series winner’s circle earlier this season, and have placed in the ribbons consistently in all classes they’ve entered.

The Canadian veteran is thrilled with his talented mount. “Concorde is a nine-year-old Dutch Warmblood. I have had him since he was six and he has jumped more clear rounds than any horse I have ever ridden. He has a bright future!”

Having moved from Los Angeles to a beautiful facility in Rancho Santa Fe this year, Pratt is grateful and looking forward to paving new paths. “Edal Ranch is amazing and a great training facility for the horses. We have everything we need to keep the horses at top level.” He continued, “Thank you to the entire Epic Stables team and the members of The Epic Group for their support.”

Three weeks of showcase events in Del Mar conclude this week at the Showpark August Festival. The jumper highlights include presentation of the Veredus Leading Jumper Awards in four divisions and the $20,000 EVet Junior/Amateur-Owner Jumper Classic on Sunday.