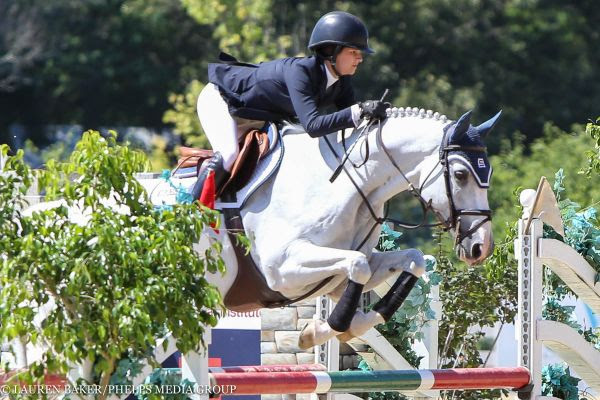 Lexington, KY – Aug. 7, 2016 – On Sunday, 22-year-old Lindsey Tomeu added a sixth consecutive win to her summer streak of success with a victory in the Adult Jumper Classic aboard DBHC, Inc.’s Bonapart. In the Children’s Jumper Classic, it was Madeline Derose and Aberdeen Ventures LLC’s Jorno who bested the field of 32 to take home the win.

Tomeu and Bonapart were the last combination to attempt the course, and turned in a clear round to advance to the jump-off. Contesting Michelle Newman and the UK Equestrian Team’s Royal Blue lead, Tomeu and Bonapart shaved a full two seconds off the leading time to take over the lead in 31.103 seconds, leaving Newman and Royal Blue in second.

Tomeu is based in Lexington, Kentucky for the summer, and trains with Shane Sweetnam and Ali Oakley Sweetnam at Sweet Oak Farm.
“It feels amazing to have won this class; we’ve had an incredible summer so far,” Tomeu said. “Bonapart is so special; he’s almost unstoppable. Today we originally planned to take a tighter inside turn to fence 10 in the jump-off, but he’s quick enough on his own, so we went wide instead. I’m happy we did, because it was a dicey turn. He’s always looking where he’s going, so once you do the first turn he has an idea. You have to think a little faster than him.”

Tomeu said she has had Bonapart, who is now 15, for two years, and considers him to be her horse of a lifetime. The duo recently earned reserve champion in the Adult Jumpers at the Devon Horse Show, and also had wins at Country Heir and the Great Lakes Equestrian Festival.

“This is my third summer with him, and we’ve formed an incredible bond,” Tomeu said. “He really is my horse of a lifetime, and I don’t think we’ll ever be able to replace him. He’s been there, done that. He’s won NAL Finals two years in a row; he’s just amazing. Today is our sixth Classic win in a row, which marks a record for me now. I couldn’t be happier with him.”

“We love Kentucky,” Tomeu said. “It just doesn’t get any better than this.”

Earlier in the day, the Children’s Jumper Classic took the stage in the Rolex Arena. Madeline Derose and Jorno were one of seven horse-and-rider combinations to go clear in the first round and advance to the jump-off, which they completed faultless in a time of 33.097 seconds. Second place went to Sophia Zuckett and Stephanie Novas’ Aretina M with a time of 35.281 seconds.

“Jorno is so awesome for a 7-year-old,” Derose said. “I’ve only had him for a little while, but he’s been going really well. When we saw him going around at HITS, Aaron said, ‘I think that’s the one for you.’ He’s great; he’s super scopey, so that’s nice. He has a big stride, but he’s really collectable.”In the jump-off, we took two inside turns that helped us save time,” Derose said. “It feels great to win with him. I’ve won one other class on him at a smaller show, so it feels really good.”

“I love showing here,” Derose concluded. “The facility is amazing. It’s really cool to go in the Rolex Arena, and it’s nice to be able to go around in a bigger ring like that.”