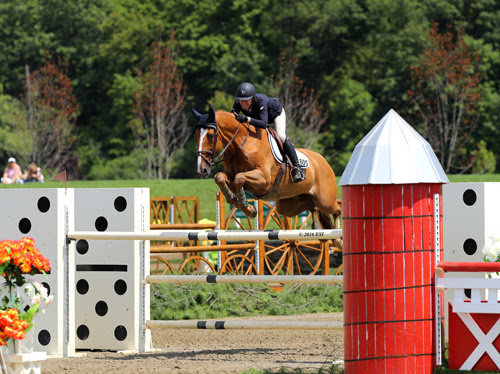 Saugerties, NY (August 7, 2016): Horses and riders competed for a shot at the prize in Saturday’s $15,000 Kindred Bio Jumper Prix at HITS-on-the-Hudson Week VI, but only one pair could take home the title.

Five jumped clear to advance to the immediate jump-off over the course set by Mark McGowan of Kilmarnock, Great Britain, and three would go double-clear in a race for the win. The top three were separated by one second each, but Molly Ashe of Wellington, Florida, came out on top with both first and third place.

Ashe brought home the win for Louisburg Farm with both rides, piloting Pjotter Van De Zonnehoeve to the blue and D’Arnita to the yellow.

“Pjotter is a seasoned veteran, but we had a bit of a bobble yesterday, so I wanted to come out and use today as a confidence builder for tomorrow’s Grand Prix,” said Ashe.

The course featured a triple combination in the first round with a few bending lines. The jump-off hosted a mid-course, double combination and several rollback options.

“It was a nice course. The rollback to the vertical in the next-to-last part of the course seemed to be the catch for a few people,” said Ashe of the course.

Ashe was the first to jump clear to advance to test the shortened course. They stopped the clock with a fault-free round in 42.373, where the lead would remain.

Following Ashe with a jump-off round was Anne Kursiniski of Frenchtown, New Jersey, and Caspar’s Lasino, owned by Market Street, Inc. They crossed the timers in 43.278, behind Ashe’s time by one second, but good enough to hold on to second place when the class was done.

Lake Worth, Florida equestrian Peter Wylde was next to contest the jump off. Wylde piloted Shakira Z, owned by Beechwood Stables, LLC., to a 41.614-second round with four faults, and earned fourth place for their efforts.

Kevin Babington snagged the next advance to the jump-off aboard Cariatide, owned by Cariatide, LLC. An unfortunate rail would earn them four faults as they crossed the timers in 42.459 for the eventual fifth place spot.

Ashe was the last in the order with D’Arnita. They clocked in clear in 44.890 for the third place ribbon.
“D’Arnita is a young horse I’m very excited about. She’s been super the whole time and is sort of new to showing at this height. She’s got a little more to learn, but once she does I think she’ll be one that’s hard to beat.”