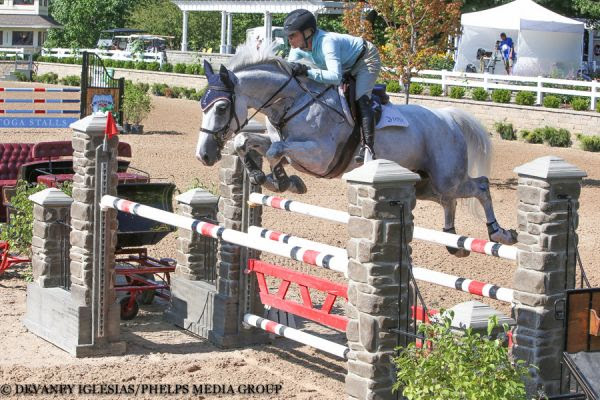 Wayne, Ill. – August 4, 2016 –  The final jump of the $25,000 Welcome Stake wasn’t an issue for Tracy Fenney, who went double clear in a time of 38.687 seconds to secure the victory. The professional rider had been on the cusp of winning since the start of the Chicago Festival of the Horse, and was able to finally ride away with the blue ribbon aboard MTM Reve Du Par on Thursday.

“I always seem to have a rail down on the last jump,” Fenney joked. “It’s the last one, every single time. When you’re running fast, thinking about winning and have all of that adrenaline going, it’s tough. I think I just let my guard down a little bit. Mike [McCormick] is always telling me to act like there’s another jump after it, but it’s not that simple.”

It was a satisfying win for Fenney and her teammate. The two have been competing together since May 2015 and had a very successful start to their partnership.

“He’s won more than 10 grand prix,” Fenney said. “I tried him out on Thursday. We vetted him on Friday. I paid for him on Saturday and won the grand prix that night. He’s a really cool horse. He’s got a really good gallop and a really good canter. He’s a little bit fussy and quirky sometimes. He’s very straightforward and nice to ride. He’s super brave. Nothing fazes him at the jumps.”

The MTM Farm owner and 11-year-old Selle Français were one of only six pairs to have an errorless ride around the Leopoldo Palacios-designed course. The duo was the third to attempt the jump-off after Freddie Vasquez set the time to beat at 42.689 seconds.

Fenney crossed the finish line three seconds faster than Vasquez, forcing him to settle for second place. Fenney and Vasquez had the only double clear rounds of the evening.

MTM Reve Du Par has not been the only MTM Farm horse to achieve success at the Lamplight Equestrian Center. In fact, the farm has dominated both hunter and jumper arenas.

Shedding some light on their farm’s success, Fenney said, “You hear MTM a lot, which is great for us. It’s nice when you look up results and see a MTM horse won here or a MTM horse won there. We’ve had a lot of success finding horses in Europe. When we look at horses, we look at their mentality. You can pretty much tell with a young one if they’re going to have that brain that you want. It’s all about their mentality and make-up. The trainers do a fabulous job bringing them along. We start with a lot of green horses, which many people don’t like to do anymore. We’ve done well with jumpers and hunters. We love doing both.”

Fenney and McCormick have been working together for years, and their success can be heard over the loud speaker every time a MTM horse is announced.

Earning the red ribbon in Thursday’s featured event was Vasquez aboard Bachelor 4. The 14-year-old has been in Vasquez’s roster of grand prix horses for three years. The Rheinlander was imported from Germany and has been a consistent ride for Vasquez.

“He’s a super careful horse,” Vasquez explained. “He’s not the fastest, but fast enough. He’s always consistent and takes away a piece of the classes he competes in.”

Sharing his thoughts on the course, Vasquez said, “It was a long track with a lot of space. I wanted to make sure I wasn’t too wide in my turns. It worked out well. Bachelor 4 jumped in the jump-off well. I rode it carefully because he studies everything.”

Shannon Hicks and Carit DMZ had the second fastest time in the jump-off, but suffered 4 faults in the speed round to earn a third place finish in 41.546 seconds. Finishing a second slower also was Hicks aboard Emir D in 42.832 seconds. The pair settled for fifth place after Caitlin Ziegler and Melody Des Haye snuck in a time of 42.615 seconds to take fourth place.

Holly Shepherd and Skymiles had a time of 47.410 seconds, which earned them the sixth place ribbon in Thursday’s featured class.

Lamplight Equestrian Center and the Chicago Festival of the Horse will be hosting the $75,000 Grand Prix on Saturday, Aug. 6, and the $25,000 Jumper Derby on Sunday, Aug. 7.

The saying goes that there is a first time for everything, and Thursday, Aug. 4, marked Kennedy McCaulley’s first time competing in the equitation division. The 14-year-old rider carried her experience from the jumper ring over to the ASPCA Maclay division to best the field of 11 riders to earn the blue.

Of the work-off, Baxter said, “At first I thought I heard it wrong, but then I got it down and I just tried to ride everything that I had imagined in my head as successfully as possible.”Baxter put down a strong and confident round with Chief, earning her a spot in the top-four callback. She commented, “I wanted to do really tidy turns and practice for finals that are coming up. I wanted to kind of go all out if I could!”
McCaulley was riding her own mare, Celtic Romance, who was also competing in the equitation division for the first time. McCaulley said, “Up until now, she’s been a jumper so this is her first time in the equitation ring as well. She felt great today; I’m really proud of her!”

McCaulley was the final competitor to enter the ring for the over fences portion of the class, and earned a spot on the callback list to return for the flat work-off. The pair effortlessly demonstrated their skills over fences and on the flat to ultimately win top honors.

“I just really had to think about sitting tall and staying back because that kind of helps [Celtic Romance] calm down too,” McCaulley said of her flat work-off. “She’s a little bit fresh today, but she was good!”

Just this winter, McCaulley broke her wrist while at the Winter Equestrian Festival in Wellington, Florida. She has been bringing Celtic Romance back into work and showing ever since recovering from her injury, and decided that they would give equitation a try at the Chicago Festival of the Horse.

McCaulley said, “We brought her to this show for equitation to see if it would work, and I guess it did! I really knew the rollbacks wouldn’t be a problem because she’s a jumper. She can be difficult with that some days but she felt great today.”

McCaulley laughed, “I was just hoping to get around really! I didn’t think I would place or anything, which was a nice surprise!”

Rounding out the top three in the division was Emma Dubinsky riding VDL Zingaro H in second place, and Brooke Pfieffer aboard Samy in third place.

Following the ASPCA Maclay division, USEF Pessoa Hunt Seat Medal riders took to the Main Hunter Ring to vie for first place honors. It was Isabella Baxter aboard her own Chief that came out on top among the field of 10 horses and riders.

“He’s pretty slow,” Baxter said of Chief. “He doesn’t like to go very fast and he really doesn’t spook at anything. He’s just very mellow and very adjustable, which is nice.”

Baxter just started leasing the 15-year-old gelding in December to compete in the equitation. She has been competing in equitation for about a year and a half under the tutelage of Shannon Hicks out of St. Louis, Missouri.

Baxter said, “I like training with her a lot. She’s helped me break a lot of my really bad habits. I’ve become a more confident and stronger rider with her.”

For the work-off, Baxter was placed on the callback list along with Emma Dubinsky on VDL Zingaro H, Amanda Shaw on Contemporary and Brooke Pfieffer on Samy.

Competition at the Chicago Festival of the Horse continues Friday, Aug. 5, beginning at 8 a.m.

The second week of competition, Equifest II, will have several prominent events to watch, beginning with the $25,000 Welcome Stake on Thursday. Friday will be the second National Hunter Derby of the competition, and Saturday will feature the highly anticipated $75,000 Grand Prix. On Sunday the Hunter and Jumper divisions will partake in a $25,000 Derby.