Home Press Release Moggre and Shiels Kick Off Final Week of Chicago Festival of the... 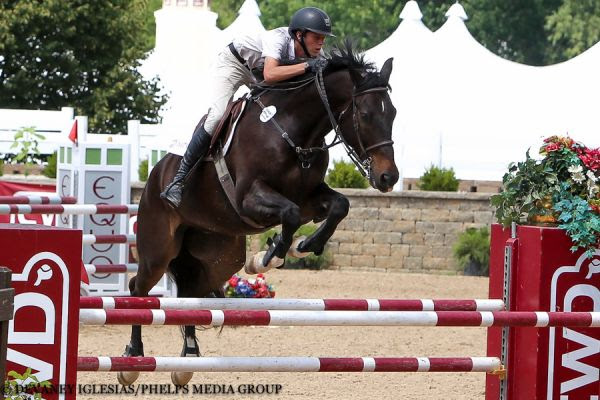 Wayne, Ill. – August 10, 2016 – The final week of the Chicago Festival of the Horse officially began on Wednesday. For Brian Moggre and Caitlyn Shiels, the week started in the right direction with double-clear rounds and blue ribbons.

Competitors were introduced to the first Steve Stephens course of the week, and while some had trouble navigating through the obstacles, Moggre and Shiels were the only athletes to achieve faultless success in the SmartPak Grand Prix arena.

“My plan today was just to have a nice smooth double clear,” Shiels said. “The first day is always training, jumping a little bit lower and making sure that he’s paying attention to what we’re doing. I thought the course was nice. My horse rode really well. The heat actually benefitted me, because normally he is kind of a hot horse and has some nice blood. The heat relaxes him. He was extremely rideable today. I thought the course was a nice test for the first day.”

Aboard MTM Erkel and representing MTM Farm, Moggre rode away with the win in the 1.40m Open Jumper class. The Texas native was the first to clear the track and make it to the jump-off, setting the time to beat at 38.927 seconds.

“I think the course rode really nicely,” Moggre shared. “It was difficult in some places, so you always had to be alert. You had to know where you were and make sure that your horse was where they needed to be in order to achieve the success you wanted. Overall, the course was nice, but technical in places that it needed to be.”

Moggre continued, “MTM Erkel has been doing really good. Today he came out and felt amazing, and I was able to do the things that I wanted to do. In the jump off, I was able to be a bit more competitive than I usually am on him, and he was amazing.”

Jordan Gilchrist and Kingston were the only other pair to earn an opportunity to ride in the speed round. Although the pair was a second faster than Moggre and MTM Erkel, they were unable to keep all the rails intact and incurred four faults to settle for second place.

Moggre and the 7-year-old Westphalin have been building on their partnership week-by-week at the Chicago Festival of the Horse. Moggre explained, “He’s quite young, and he is very strong. Recently, we’ve been working to get him into a more rideable state of mind and more controllable. The past two weeks, we’ve been trying to figure out what bridle works out best for him.”

The pair have long term plans that have been set into motion. Moggre feels that MTM Erkel provides the scope and power needed to be his big grand prix horse. Over the next couple years, the motivated athlete plans to continue to build up the black gelding.

Shiels also has big plans for her 9-year-old Warmblood, Cavalier II, who earned the blue ribbon in the 1.30m Open Jumper division with the sole clear round of the class. The rider-and-horse combination claimed the top spot on the leaderboard with a time of 38.101 seconds.

Imported as a 6-year-old, the duo has been working together for nearly three years and consistently improved.

“We’ve been taking our time,” Shiels explained. “I’ve moved Cavalier II up a little bit every year. When I first imported him, we did the 6-year-old Jumpers. I qualified him for the Young Jumpers in Kentucky, then last year I moved him up to bigger classes and did a few small grand prix events. This year, I’ve played around with some 1.35m, 1.40m and 1.45m.”

She continued, “He has been great all along. He’s a little bit challenging. He has a little bit of a hard mouth, so we’ve just been figuring out what bridle works best and what program works best. He’s a little sensitive to certain things, he has his quirks. I call him my unicorn. I’m really excited about him. I’ve been trying to not get too excited and push him too much, but he’s got an incredible jump and I know that the talent is there. I know that he is very smart and anything that I ask he will do.”

The duo plan to compete in the $15,000 Welcome Stake that is slated to take place Thursday. If all goes well, they may take on the $50,000 Grand Prix on Saturday.

The Massachusetts native has been living in Illinois for the last three years and working with Canterbury Farms and has enjoyed the Lamplight Equestrian Center show grounds throughout that time.

Sharing her thoughts, Shiels said, “We’re excited to be here! The facility is great. We really enjoy this horse show, and it’s a great one to participate in before the fall picks up. It’s been a great two weeks so far!”

The final week of the Chicago Festival of the Horse kicked off with the professional hunter divisions at the Lamplight Equestrian Center. Lamplight regular, Holly Shepherd, took to the Main Hunter Ring aboard Zoso and HJ Noteworthy to take home top ribbons.

Hanley Morrison, who trains with Shepherd, and also had an entry in the Conformation Hunter division. Morrison was riding another one of Loretta Patterson’s mounts, Tempting, and earned a second and a third place in her classes.
The First and Second Year Green Working Hunter division started the day off, with Shepherd and Zoso taking the lead. Zoso and Shepherd earned a first and a second place over fences, setting themselves up nicely for the second day of the division, which will take place on Thursday, August 11.

“He’s doing good,” Shepherd said of Zoso. “He surprised me last week in the Derby because I thought he would go better. But I filled a division today and I figured he deserved to go four times. He was great all four times and went nicely.”

Shepherd also rode Zoso in the Conformation Hunter division, earning another first and second place ribbon for their stellar rounds. Shepherd continued dominating in the division aboard HJ Noteworthy, owned by Loretta Patterson, bringing home a first and a third place.

Shepherd commented on HJ Noteworthy’s rounds, saying, “He took a little peak in the first round, so I let him do an add stride, but he came back and jumped great for the second class!”

Of her string of horses, Shepherd said, “I think they’re pretty classic hunters, a little old school. They’re good jumpers, and one of them is beautiful across the ground and the other is beautiful in the air, so they’ve got a little variety there.”

Shepherd has seen a lot of success throughout the past two weeks at the Chicago Festival of the horse, including multiple hunter tricolors and jumper victories. Shepherd has worked closely with Loretta Patterson for over 12 years, riding and competing her top horses.

Patterson said, “I actually bred Zoso, he’s an amazing horse! Holly and I have been together almost 13 years, and we are partners, everything works well for us. Holly is just so easy to get along with.”

Shepherd will return to the main hunter ring on Thursday, August 11, to contend for her respective championship ribbons on HJ Noteworthy and Zoso. Competition at the Chicago Festival of the Horse continues Thursday beginning at 8:00 a.m.