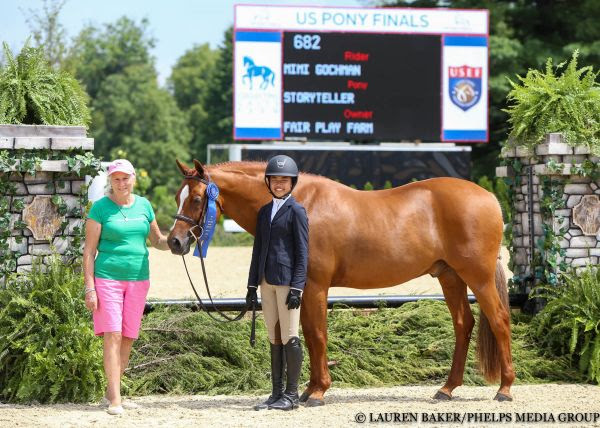 So Enchanted and Caroline Passarelli Sweep the Small Green Pony Hunter Model and Under Saddle on First Day of U.S. Pony Finals

Lexington, KY – Aug. 9, 2016 – Mimi Gochman kicked off her fifth year at U.S. Pony Finals with a win aboard Fair Play Farm’s Storyteller in the Large Pony Model and a third-place finish in the Large Pony Under Saddle, heading into day two of competition sitting in the lead with 521.8 points.

“I’m really excited and very happy,” Gochman said, smiling. “Since I’ve done Pony Finals so many times, it makes me so happy to have success here. In the past few years I’ve gotten better at doing this, but modeling is hard and hacking can be very hard, so to win out of so many kids, I’m very proud of him.”

Coming in second with 258.760 points in the Large Pony model was Ashley Aycox’s Garavani, who was handled by Devin Seek. In third place with 257.37 points was Tantallon Co-Captain of MDHT Equestrian LLC, handled by Dakota Champey.

The 11-year-old, who is based out of West Palm Beach and trains with both the Baxter Hill and Rivers Edge Farm teams, said she got the ride on Storyteller around this time last year, just one week after Pony Finals.

Going into Wednesday’s over-fences class, Gochman acknowledged that her job was not done yet, and said she is going to focus on thinking ahead and continuing to ride her best.

“Tomorrow, I have to keep going,” Gochman said. “I can’t just say that I did well now and not try tomorrow. I’ve got to keep trying really hard. I try not to be nervous and to make it like it’s another show, but again this show is so much fun and we’re in the big ring. The ponies don’t get to go in a big ring like this a lot, so it’s special.”
In the under saddle, it was Iwasaki & Reilly’s Small Soldier and Augusta Iwasaki who took home the blue ribbon with their score of 264.58 points. Taking home second place on the flat with a score of 262.5 points was Foxlair Syncopation, ridden and owned by Kayla Jacobs.

Coming in second overall at the end of day one with 509.85 points is Garavani, owned by Aycox and shown by Seek. Heading into day two in third with 506.2 points is R Cinderella Man, owned and shown by Abigail Fox.

So Enchanted and Caroline Passarelli Sweep the Small Green Pony Hunter Model and Under Saddle on First Day of U.S. Pony Finals

Fourteen-year-old Caroline Passarelli rounded out the first day of U.S. Pony Finals with back-to-back blues in the Small Green Pony Hunter division with her mount, So Enchanted.

“Lex,” as the mare is called in the barn, is owned by Jessica Zandri, and Passarelli recently got the ride aboard the 8-year-old chestnut mare in the beginning of June. Despite this new partnership, Passarelli took the top prize in the model before heading back into the ring for the under saddle phase, where she triumphed yet again.

Passarelli was calm and collected going into this year’s U.S. Pony Finals as it is her fifth consecutive year. The Pony Finals veteran trains with the team at Heritage Farm based in Katonah, New York. She only had positive things to say about her mount.

“This pony, she’s really a special one,” Passarelli beamed. “You don’t come across ponies like this many times. She has a great mind; she really wants to win and she knows that she can be the winner.”

“You really have to ride kind of like you’re asking her to do stuff, not telling her,” Passarelli continued. “She really wants you to ride her like she’s the driver. She’s truly amazing – she’s one that you don’t find many times. And for her to have the whole package, it is really special to be able to ride her.”

Passarelli, of High Falls, New York, knew what her game plan was going into the under saddle phase — Lex prefers her pilot to be simple and let her do her job.

“She’s a great mover, so it’s just letting her go forward and kind of do her own thing. She doesn’t like when you fuss with her too much, so you just set her up and leave her there and she likes to hold her own.”

In terms of the model, Passarelli noted, “You can just leave her alone and she’ll look pretty.”

The young rider had a mature and realistic attitude going into tomorrow’s over-fences portion.

“Well, they’re green ponies so anything can happen no matter how great they are the rest of the time, so I’m just planning on giving her a really strong, confident ride and having her be her best. Hopefully, it will all turn out well.”

So Enchanted and Passarelli are heading into the second day of U.S. Pony Finals in the lead in the Small Green Pony Hunters with a total score of 518.46, while Lauren Reed and Starstone are currently sitting in second place with a total of 497.67. Casey Oliver and her mount, Picturesque Bow Tie are in third with 489.98.

Competition at the 2016 U.S. Pony Finals will resume tomorrow morning in the Walnut Arena starting with the Regular Small Pony Model followed by the under saddle.

For more information about the 2016 U.S. Pony Finals, please visithttps://www.usef.org/_iframes/breedsdisciplines/discipline/pony/ponyfinals.aspx.

What: The 2016 Kentucky Summer Horse Shows series includes two weeks of top hunter/jumper competitions during the months of July and August. The Kentucky Horse Shows series is the host of the Hagyard Challenge Series and the Hallway Feeds USHJA National Hunter Derby series.

Approximately four miles away from the horse show, discover the place where elegant comfort in an ideal location meets excellent service and affordability. At the Clarion Hotel Lexington, you’ll find well-appointed accommodations with options of two double bed, two queen bed, king rooms or suites and exceptional amenities such as our free hot breakfast buffet. Home of the Kentucky Horse Park, the Lexington Convention Center, University of Kentucky and the Kentucky Bourbon Trail – our Lexington hotel is on Newtown Pike at Exit 115 on I-75, close to all the big attractions, and is the perfect place to stay whether you’re here to get down to business or have some fun. Best of all, bring your furry friends for any trip because the Clarion Hotel in Lexington is also pet-friendly.

Campground reservations: Reservations may not be made through the horse show office. To reserve a campsite at the Kentucky Horse Park for any of the horse shows, please call the Campground Store at 800-370-6416 or 859-259-4157, or email Ryan McGaughey atryan.mcgaughey@ky.gov. Be specific as to the show name and the dates you wish to stay. Check-in time is 2 p.m. and checkout is noon. You must make arrangements with the Campground Store if you plan to arrive earlier than 2 p.m. or stay later than noon. Vehicles that are not removed from a campsite by checkout time will be towed.