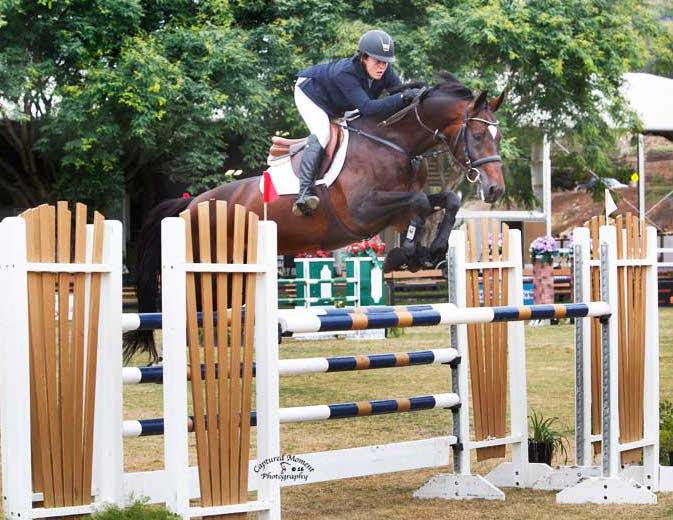 Twenty-five competitors took a tour around the grass grand prix field in the $20,000Electronic Vet Junior/Amateur-Owner Classic on Sunday, August 7th. Argentina’s Ivan Tagle designed the track, with nine entries qualifying for the timed round.

Sophia Mossman and Carre were first to return. Lowering the height of a jump early on, she left the door open for a clean and fast ride to take the lead, which is exactly what the next pair, Michelle Kerivan and Colin, executed, making the time to beat 44.75.

A few rides later, Allyssa Hecht and Calvatos Z (owned by Neaulani Farms) shaved almost a second off of Kerivan’s time, stopping the clock clean in 43.84. Two more clean efforts followed,  Jaime Azcarraga and Anton and Nicolas Nierenberg aboard Nero Z, but neither could catch Kerivan’s or Hecht’s times.

Next in proved best when Milmo piloted Tango II to a blazingly fast 41.94, almost two seconds speedier, to take over the top spot and ultimately lead the victory gallop. Not having competed at Showpark for several years, the twenty-six-year-old amateur from Mexico wrapped up her three weeks in Del Mar with a memorable win.

New Veredus Leading Rider awards for the 2016 season were presented on the final day of Showpark August Festival competition. The titles went to the Jumper Riders from the three week Showpark Festival circuit who accumulated the most points on their highest placed horse from their respective section and classics.

Maria Paula Diaz took home the Veredus Leading Adult Jumper honors after accumulating a total of 66 points over the three weeks of shows in Del Mar.

After winning a Markel Insurance Grand Prix during the Showpark Summer Festival and another Open Jumper Classic during Showpark Racing Festival, and placing in that week’s Grand Prix, Juan Manuel Luzardo was announced as the Veredus Open Jumper Rider of the Showpark Festival Series. Despite a late surge in points by runner-up Chris Pratt, Luzardo’s total of 26 points could not be beat.

With a commanding lead going into the final Children’s Classic of the series, Christina Guzman earned 58 points and could not be beat! For her outstanding three week efforts on Humberto Guzman’s Phion, which included one classic and four class wins in the Children’s Jumpers, Christina was presented with a Leading Rider Sash and Veredus Horse Boots Gift Certificate.

Visit the Blenheim Facebook page to see more photos and highlights, and click here to read the full press releases on the Blenheim press page.

Blenheim EquiSports is preparing for a busy August and September with the final five shows of the outdoor season. Over $350,000 in prize money is up for grabs with numerous events on the schedule, including two $50,000 1.50m Grand Prix, as well as additional qualifiers for the Markel Insurance 1.40m Grand Prix Series, Interactive Mortgage U25 Series and the Interactive Mortgage 10 & Under Futurity Series, two Young Jumper Championships, the commencement of the Medal Finals on the West Coast and much more. Stay tuned for details about each discipline over the coming weeks.

Electronic Vet provides an innovative, user-friendly, digital vaccination record that is designed to meet the ever-growing needs of horse show venues. Electronic Vet provides accurate up to the minute records of immunizations and test results prior to competition. Our custom, easy to use interface, allows for complete online access from ANY mobile device, or desktop computer. By providing accurate, efficient, and secure information, Electronic Vet is the authority in online vaccination record storage. More at electronicvet.com.

Veredus® is passionately committed to a complete and innovative line of sport horse leg protection and care. Advanced technology, leading-edge raw materials, accuracy, and attention to detail are the elements that make Veredus® unique. The Veredus® Boot Collection ensures that your horse’s legs are protected in the latest most technically advanced anatomically designed boots available on the market. No matter your preferred discipline – Jumpers, Eventing, or Dressage – Veredus® has a horse boot designed for your horse. The Veredus® Magnetik Collection – an innovative breakthrough therapy system – provides a range of products to cover most key areas: body, hock, leg, and hoof. More info at veredususa.com.