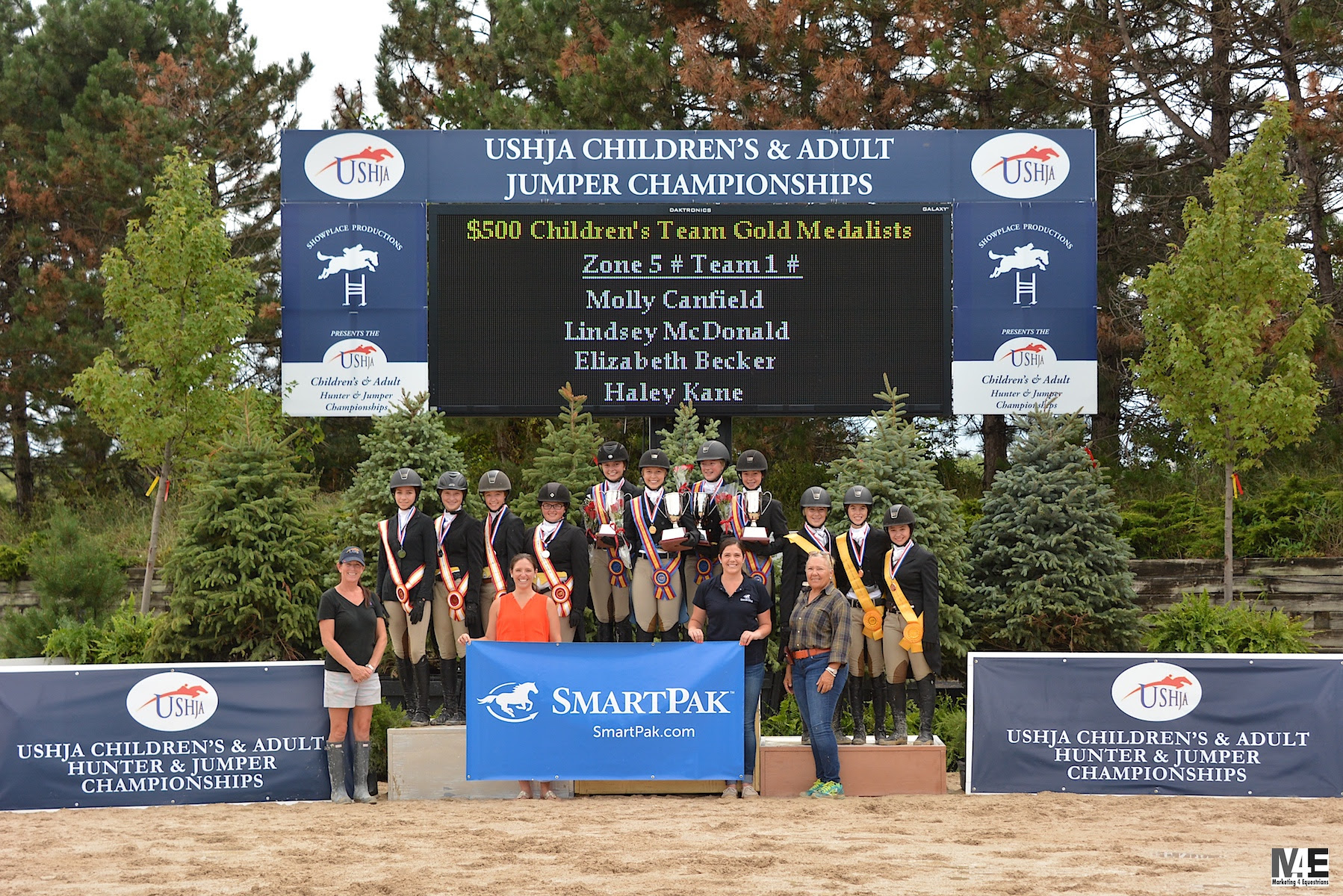 Three Children’s Hunter Teams began with the Under Saddle in front of judges Alex Jayne, Joe Heidgen, Otis Brown and Bucky Reynolds, followed by two classic rounds over fences. It was Zone 5 Team 1 with Chef d’Equipe Tina Judge Boyle of Oswego, Illinois, who took the gold medal, earning 1372.50 team points. Molly Canfield and Penny Lane were the top scoring pair for their team, racking up 475.5 points, the second highest score of all the children’s riders. Team members Lindsay McDonald with Prescott, Elizabeth Becker with Corlando 49 and Haley Kane with Lincoln rounded out the team.

“It was one of the best experiences of my riding career,” said rider Lindsay McDonald. “It’s amazing, you have people cheering you on and all the support you receive from your team and all the other riders is really incredible.”

The team also extended their sincere thanks to the sponsors, SmartPak, the course designer, jump crew, office staff, Showplace Productions and USHJA for the great event.

Zone 5 Team 2 tallied up 1367 points for the silver medal, with Taylor Holstead and Roc’s All That earning the most points for her team with 468. Cassandra Parker with Off The Menu, Katlyn VanDyke with Wayfarer and Riley Huyser with Cayenne Z added to the team score.

Zone 5 and 2 were combined for the final team with Chefs Cynthia Williams of Westchester, NY, and Judge-Boyle, taking home the bronze medal with 1335 points. Abigail Lefkowitz and Valmont were not only the highest scorers for their team but came in as top scoring children’s hunter for the day, winning both over fences rounds. Delaney Hoffman with Bravo and Mia Boemio with Kalamata NSF, added to the team total scores.

Children’s hunter riders and parents as well, celebrated the day with hugs and congratulations with teammates and new friends as they received their awards on the podium.

Adult Amateur Hunter riders then took to the Grand Prix ring for their shot at the gold medal. In a battle to the finish, it was Zone 5 and 1 combined with Chefs Brooke Baldwin DeGrazia of Ridgefield, Connecticut, and Judge-Boyle, who were victorious. The team earned 1391 points, coming from 24 points behind after the under saddle and moved on to earn the same points over fences in round one as Zone 5 Team 1. Then Sophie Cohen and Que Sera nailed the second round with scores of 90 and 92, making her the highest scoring hunter of the day with a total of 522 points for her team. Liz Kline with Rating Agency, Melissa Williams with Poetic and Ashley Abbruzzi with Finesse, shared in the gold medal victory.

The winning team as a group offered up sentiments of great sponsorship, organization and great friendships formed from the team format competition.

Zone 5 Team 1 took the silver medal home, just two points off the winning team’s score with 1389 points. Donna Struve and her In Print earned the most points for her team with 502, the second highest score of the day. Lauren Lackey with Providence, Maria Keevins-Kogen with True North and Cecilia Winfrey and Stanford, finished off the final hunter team.

Hunter riders will start Saturday with a clean slate for the Children’s and Adult Amateur Individual Championships in a slightly different format. They will under saddle, then compete over a classic hunter derby style course followed by a handy hunter course. The highest overall score from all three phases will become the Individual Champion.

Individual Jumper Qualifier
Children’s and Adult Amateur Jumper riders competed in the first individual qualifying round, a Table III Faults converted to time format. Riders tried to be clean and speedy for the top spot on the championship list.

Kristen Franz, 15, of Wayne, Illinois, had the luck of the draw going last in class, laying down a clean round and a speedy time of 63.362 for the win. Franz rides with assistant Chef d’Equipe Liz Atkins in Hampshire, Illinois. Her mount Cypress is a nine-year-old Holsteiner. She started riding him in November so this is her first year competing with him.

“This event really gives riders a good feel of FEI and team competition. I’ve seen some of the riders on my team compete at Traverse City, we have a really strong team and we plan to win,” she added with a smile.

“Everyone is excited after today but we will keep the team focused and concentrate on clean rounds to ideally win this competition,” added a confident Atkins.

Adult rider, Jean McLaren and Avanz R, held the lead for most of the class, setting a blazing time of 63.869, forcing the rest of the field to be clean and beat her time, but only Franz was able to do that.

McLaren and her horse have a combined age of 78, the horse is 18 but we wont tell you her age! McLaren rides with Scott and Josey Gentry in Bristol, Wisconsin and lives in Evanston, Illinois. She was third in the Individual Championships last year and was on the gold medal team but has plans to beat that this year.

“She is the definition of a horse with heart,” said McLaren. “In her day she was a 1.60m speed horse. I had never ridden a hot horse like her before her so I had to learn how to rider her and not fight her. This is her swan song; we are going to retire her after this. I want to go out in a blaze of glory.”

Following behind the top two were Jennifer Lanoha with Dare to compare in third, Hailey Royce and Rapidash in fourth, Lisa Baker and Syminka fifth and Christina Meeks and Garnet completing the top six.

Jumper riders will compete as teams over two rounds in a Nation’s Cup format on Saturday, which will also serve as the second and third qualifying classes for the Individual Championships. The final round takes place on Sunday.

All events for the weekend will be live streaming with Diane Carney adding the commentary. The broadcast can be found on www.starcreeklive.com.

To learn more about the USHJA Children’s and Adult Amateur Hunter and Jumper Championships, visit www.ushja.org.

Chris Payne and Kelley Farmer Take the Victory Gallop Side by...