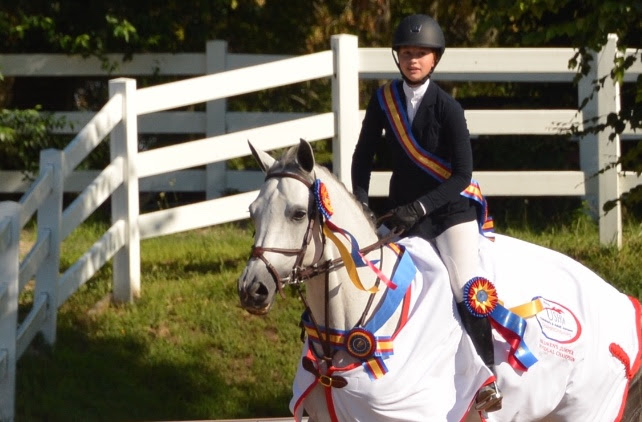 The fourth and final round was another great course by Danny Foster of Milton, Ontario, Canada. Foster was a member of the Canadian Show Jumping Team and earned an individual gold medal as well as the team silver medal at the 1991 Pan American Games in Havana, Cuba. Foster continued as Chef d’Equipe for the Canadian show jumping team at the 2002 World Equestrian Games and in the 2003 Pan American Games. Under his watchful eye, Canada brought home a gold medal in 2004 at the Palm Beach Samsung Nations Cup of America and a bronze at the Spruce Meadows Masters. Foster was inducted into the Jump Canada Hall of Fame in 2011 and as an FEI course designer, he has designed for some of North America’s premier horse shows and events. Exhibitors raved about Foster’s ability to make the courses challenging and exciting.

Gold
Franz jumped all four rounds fault free to secure the individual gold medal as well as leading her team to the silver medal with a four fault tie breaking jump off. She had the luck of the draw going last in the first qualifying class, which gave her the advantage of knowing the time she had to beat, giving her the early lead. Her mount, Cypress, is a nine-year-old Holsteiner she started riding in November with her trainer and Zone 5 assistant Chef d’Equipe, Liz Atkins. Atkins runs Benchmark Stables, the premier facility and training program in Hampshire, Illinois, evidenced by the multiple victories Atkins herself has in the Grand Prix arena.

“My horse is amazing, he is a saint,” said Franz.  “In the short year we’ve been together we’ve been working hard and I think it finally clicked. It was really cool to work as a team and get to know the other riders and encourage them.”

“I’m so excited about it (EAP)! It helped my riding and I really learned a lot so I’m looking forward to doing it again,” said Franz.

Silver
The individual silver medal went to Hailey Royce and Rapidash, also putting in four fault free rounds. The pair had a slower time than both Franz and bronze medalist, Jean McLaren, in Friday’s qualifying round, which gave her the 3.768 penalties. Royce of Gurnee, Illinois, was selected by her Chef d’Equipe for the jump off with Franz to break the tie for silver, where she accrued eight faults for the team bronze medal. Royce has been showing Rapidash since 2014, earning numerous championships in the children’s jumpers including the championship in the 14 and under Children’s Jumpers during WEF 8 this year. The horse is known for its speed and quick turns and has carried numerous riders to Children’s Jumper Championships.

Royce, only 11-years-old, trains with Lorrie Canady at Galway Farm in Long Grove, Illinois. Canady has earned jumper ribbons at Spruce Meadows and is an experienced trainer with over 30 years of experience as a professional rider and trainer. Canady’s rider, Molly Canfield, earned the gold medal in the Children’s Hunter team and also the individual competition during the hunter championships this weekend.

Bronze
The bronze medal went to the top adult rider, Jean McLaren, who finished second in Friday’s qualifier but had an unfortunate 8 faults in the first round of the team competition, followed by two more clean rounds. McLaren of Evanston, Illinois, is cool under pressure and has determination. She rode in the 2015 Championships, earning a team gold and the individual bronze then as well. Her 18-year-old mount, Avanz R, will be retired and used for breeding now that the championships are over. The mare has had a jumping career since she was five years old and grew up to be a 1.60m speed horse at one point. McLaren has a new horse she will be working with to move up to the Low Amateur Jumpers.

“The format is challenging but these were tough courses,” said McLaren. “The competition is good so you never know how you’re going to end up until the end. I really just wanted to ride smoothly and not break her up too much. She was very rideable today until the last jump – she had her eye on the in-gate,” added McLaren about her round today.

McLaren rides with Scott and Josey Gentry at HBG Equine in Bristol, Wisconsin and is the President of  Marc USA in Chicago, an independent advertising agency. She only gets to ride two weekends a month but accomplishes her goals despite that, at the age of 60.

“Pat and Nicole Boyle put on such a great event,” added McLaren. “I really encourage people to participate, qualify and come. It’s really a lot of fun.”

Exhibitors and trainers expressed their appreciation to Showplace Productions, Pat and Nicole Boyle, USHJA, Danny Foster and all the staff and sponsors for supporting the event. The extra efforts and hospitality are top notch, held at a beautiful facility with great footing, gorgeous jumps and seamless schedules, making the championships a memorable and fun event.

The entire Championship was live streamed and can be seen on demand atwww.starcreeklive.com. Commentary by Diane Carney, USEF R Licensed Official, talked about the course, the ability of the rider to ride Danny Foster courses clean, the scoring and the horsemanship involved with both hunters and jumpers.

Star Creek Live sponsored Team Spirit Awards during the competition. Tapestry Farm and HBG Equine along with Benchmark Stables were the winners of the awards. It was a great way to get spectators involved in the competition as well as build on the team experience by supporting the riders.

A complete list of results including the hunter competition can be found onwww.showplaceproductions.com.

To learn more about USHJA programs, visit their website at www.ushja.org.