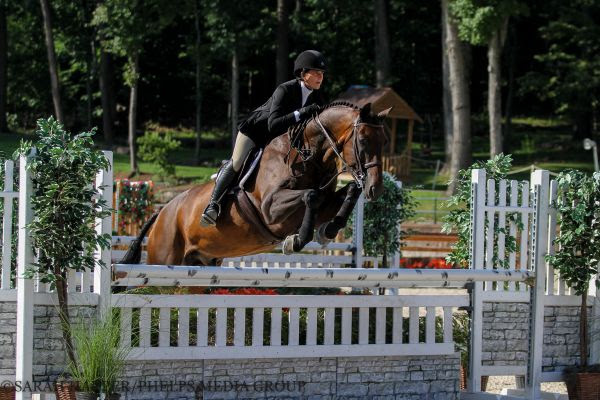 Gladstone, N.J. – August 16, 2016 – Monmouth at the Team kicked off Tuesday with hunter and equitation divisions as well as fantastic hospitality that is sure to become the trademark of the show. The morning hunter divisions were accompanied by a delicious brunch, sponsored by The Driscoll Family, as staff welcomed exhibitors and spectators to the event’s new location at the historic Hamilton Farm, home of the United States Equestrian Team Foundation.

The afternoon saw the equitation riders take to the ring. In the ASPCA Maclay, sponsored byMountain Pointe Equine Veterinary Services, it was Nina Mazzella and Inseguimento who brought home the win. Mazzella was thrilled with her ride on Tuesday afternoon as it brought her a qualification for regionals. Inseguimento is a new mount for Mazzella. The 10-year-old German Warmblood gelding is owned by her sister Samantha and is a new ride for her.

Mazzella is a student of show owner Michael Dowlling’s and was excited to be at the show and see all of the hard work that she has watched throughout the year pay off. “It was fun to be one of his first clients to ride here,” she said. “I think it is running very smoothly, everything is great.””He needs a push ride, a lot of leg,” Mazzella said. “I ride a jumper and he is my sister’s horse. I don’t really know him that well. I showed him for the first time at Junior Hunter Finals and we were ninth overall in the country. It’s all him, he’s great, he makes me a good rider.”

Olivia Bloch and her own Checker an 8-year-old Warmblood gelding brought home the win in the class after a lovely first round and a solid performance in the final test, which included a trot fence, a hand gallop fence, and a simple change that tripped up several riders. Bloch was happy with her performance and excited to receive the blue ribbon.

Bloch was excited to be able to ride in the ring at historic Hamilton Farm and saw it as a preparation for an eventual appearance at the Platinum Performance/USEF Show Jumping Talent Search Finals. “This is the first time I have been here,” Bloch said. “I haven’t done USET Finals in the past. It’s a cool environment to be here and prepare for it a little bit, just get in the ring.””I was just trying to stay relaxed,” Bloch said. “Not to over think anything, just ride it how it was set. I thought it was pretty nice. Everything came up pretty quickly, so I think that was the biggest test. The call back test was a little bit confusing with the last simple change of lead, I didn’t know what they were asking at first. I had to watch a few and then I figured it out.”

In the Junior/Amateur Owner Hunter Division, Lauren Reid and her own Carico a 12-year-old Oldenburg gelding brought home the championship. Reid also trains with show owner Michael T. Dowling and was excited to be showing at historic Hamilton Farm and to see all of the hard work that the show management has put in come to fruition

Reid plans to show in the 3-foot section of the $10,000 Monmouth at the Team Hunter Derby on Thursday, hoping to bring home the Beval saddle that will go to the winner.  “I ride with Michael (Dowling),” Reid said. “I’ve been with him as he’s set up the whole thing. It’s really cool to see it all come together. I’ve never been to USET before and yesterday was my first time here, it’s beautiful and I’m excited to be able to show here.”

Monmouth at the Team will continue Wednesday with 2’6″ divisions in hunters and equitation as well as the $1,500 Bit of Straw Pre-Children’s/Low Adult Hunter Classic. Hospitality highlights Wednesday will include a BBQ Picnic sponsored by CWD Sellier. Additional highlights during the week include $10,000 Monmouth at the Team Derby Day on Thursday and the $10,000 1.30m Horseflight Mini-Prix.

2016 Monmouth at the Team Fast Facts

When using a GPS to get to USET Headquarters, please enter School House Lane.

Route I-80 East take Exit 27 off Route I-80 to Route 206 South. Take 206 South. Approximately 4 miles south of Chester make a right at the light for Pottersville Road, aka Route 512. FollowGENERAL DIRECTIONS BELOW.

Route I-78 East to Route I-287 North. The second exit on I-287 will be #22B for Routes 202/206 North (look for brown USET signs). Proceed North on Route 206 to Pottersville Road aka Route 512 (sixth traffic light-approximately 5 miles). Turn left at the traffic light. Follow GENERAL DIRECTIONS BELOW.

After exiting the airport follow the signs to Route I-78 West to exit 29 Route I-287 North. Take the second exit on I-287, #22B for Route 202/206 North (look for brown USET signs). Proceed North on Route 206 to Pottersville Road aka Route 512 (sixth traffic light-approximately 5 miles). Turn left at the traffic light. Follow GENERAL DIRECTIONS BELOW.

Travel on Pottersville Road for approximately 3/4 of mile. On left is white USET sign, turn onto School House Lane. Follow this road, after the third speed bump the USET headquarters are on the right. After parking, enter the stable through the central grand rotunda; the offices are on the right.