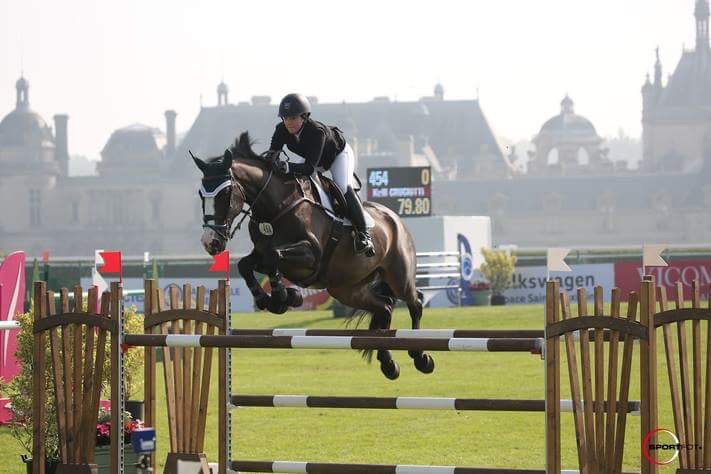 Entering the 2016 the Winter Equestrian Festival (WEF), Kelli Cruciotti, 19, of Elizabeth, Colo. had a lot to live up to as she had recently won both the Pessoa/US Hunt Seat Medal Finals and the Private Tutoring Services North American Junior Equitation Championships and come in seventh in the ASPCA Maclay Finals and WIHS Equitation Finals. However, Cruciotti did not let the pressure get to her.

Competition in the U25 circuit at WEF was tough. With the country’s top young riders all fighting for a place in the top spot, there was no room for mistakes.

“My strategy in all of them really was just to place, because you win more points placing consistently than you do winning one and losing others. So my plan was to not be conservative, but just be smart in every class so I would get good placing, and I was fortunate enough to have two horses [Zidante and Chamonix H] there to help me achieve that,” Cruciotti said about her plan going into the series. This series, presented by Artisan Farms and the Ziegler Family, awards consistency, so coming into the final of seven events, Cruciotti’s lead was insurmountable, and she ended up with the Overall Series Champion.

Cruciotti did not come home with just a ribbon. The Ziegler Family generously awards the top placing rider an invitation to compete at the CSI2* Chantilly Horse Show, which is part of the Global Champions Tour from May 26th to the 29th in Chantilly, France. Along with the invitation comes two tickets to the prestigious Chantilly VIP lounge, transportation for one horse, and a layover at Artisan Farms in Vrasene, Belgium.

With Chantilly as her first overseas competition, Cruciotti was ecstatic. Coming along with her were Chamonix H and Quirado, along with two new equine additions, Hadja Van Orshof and Haylie Van de Groenendijk.

“We all flew on the same flight, as it was half passenger and half cargo. So I was sitting in the very last row and there was this little tiny trapdoor and [the horses] were all right behind me. It was really cool,” she said, even describing how she was able to occasionally get up during the eight hour flight to go back and visit the horses. Initially, the team spent some time in Holland and competed at the exceptionally well run CSI3* Eindhoven Horse Show in the Netherlands. Her first horse show in Europe was certainly a learning experience, and one of the hardest learning curves was the warm up arenas. “Emile said to me at the beginning of it all; ‘Ok let’s get one thing straight: you don’t own any warm up jump.’ So, I found out that you have to share the jumps, and there would be at least six people on one jump at a time. So, when it was low, you had to make sure to get on it or else you would have to wait a while longer until those people were done.” With the help of veteran Emile Hendrix, Cruciotti sailed into the ribbons, earning a seventh place in the 1.50 Grand Prix qualifier on Chamonix, and a sixth place ribbon on Haylie in a 1.40 speed class.

Her next show destination was Opglabbeek, Belgium for the Centaur Park CSI2* Horse Show. Finding success once again, Cruciotti captured two ninth place ribbons aboard Quirado in the 1.35 7 year old classes, as well as a sixth place in the 1.50 Grand Prix riding Hadja van Orshof. When asked about how the language barrier effects the riding, she noted, “It definitely does come into play, and when I went over there, I was like, ‘I am going to learn all of these languages!’ But, it never happened,” she said with a laugh. “But the hardest was in Belgium, because they wouldn’t give you any counts until you were about two out, and you couldn’t understand what was going on sometimes, so you had to be on your game watching the arena and your rider list to see when you would go.”

After the fun of Belgium, Cruciotti then flew home for a few days to celebrate her brother’s college graduation. But, then it was back into the thick of things and straight to Chantilly, France, for the famed Global Champions Tour. “This was the ‘prize’ you could say from the Ziegler family for winning the Under 25 circuit at WEF,” Cruciotti said. She expressed her excitement about being able to gain a spot in one of the largest and most competitive shows in the world. True to form, Cruciotti showed her talent through several clear rounds and fast times, placing in the top 20 in a few of the very prestigious classes.

From Europe the team flew back to North America to the gorgeous show grounds of Spruce Meadows in Calgary, Alberta, Canada. This renowned show proved to be a successful test of Cruciotti’s skills. One of her many triumphs in Spruce Meadows was her astounding victory in the Under 25 Grand Prix, winning over a competitive field of 31 of some of the world’s best young riders.

Kelli Cruciotti continued her winning ways throughout the summer. After her international adventures, she came back to her roots in Colorado and dominated the last few weeks of the Summer in the Rockies Horse Shows. Now at home with her horses, she reflects back on the success of the entire trip. “To know that you’re not only representing yourself over there, but also representing your country is a very proud feeling. You don’t want to just do well for yourself but also for your nation, and to also make sure you’re setting a good example.” One can only hope that Kelli Cruciotti is showing at the next show they are attending. She is not only an extremely talented rider, but also a humble human being whose demeanor exhibits her true values and makes her one to emulate.