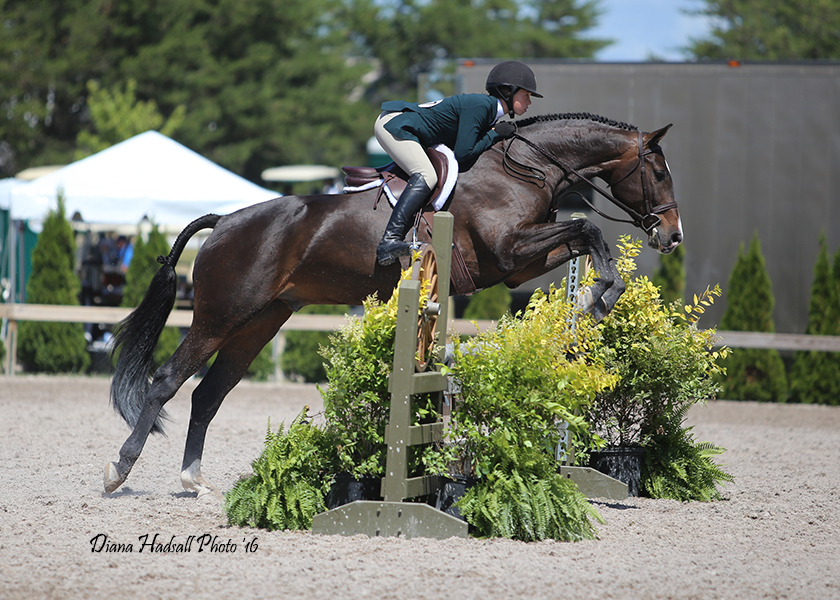 Molly Canfield and Penny Lane, owned by Michelle Shapiro, walked out of the Zone 5 Children’s Hunter Regional Finals as Gold Medalists in both the Individual and Team portion of competition the weekend of August 13, 2016.

Penny Lane, currently ranked sixth overall for the Zone Five HOTY Award in the Children’s Hunter division with 915.13 points after eight competitions, competed in both rounds of competition for finals at the Lamplight Show Facility of Wayne, IL. Taking competition day by day, Canfield and Penny Lane earned themselves an impressive score of 494 points by being second in both the under saddle and over fences classes. Canfield and Galway Farm’s head groom, Sergio Mendoza, also earned themselves the Best Turned Out Award for the weekend sponsored by Smart Pak.

Canfield began riding at the age of six with Lorrie Canady of Galway Farms in Long Grove, IL. Molly along with her mother, Mary Beth, have been training with Canady for the past 23 years. On Galway Farms yearly trip down to Ocala, FL in 2014 for the Winter HITS Circuit, Molly tried and leased Penny Lane from Shapiro in Burlington, VT.

Penny Lane is a 15 year old Oldenburg mare which the Canfields have been leasing for over a year. In 2015, Molly competed in the Children’s Hunters on Penny Lane and the Low Children’s Jumpers on Quattro, Canady’s 18 year old retired Grand Prix horse. Molly currently also competes on her mother’s horse, Claas Clever, in the Modified and Regular Children’s Hunters and hopes to move up into the Junior Hunters. Some of Molly’s other future plans include finding an equitation/jumper horse to compete in the big Equitation classes. She plans to compete at the Capital Challenge Horse Show and in the NAL Children’s Hunter Finals at Harrisburg later this year.