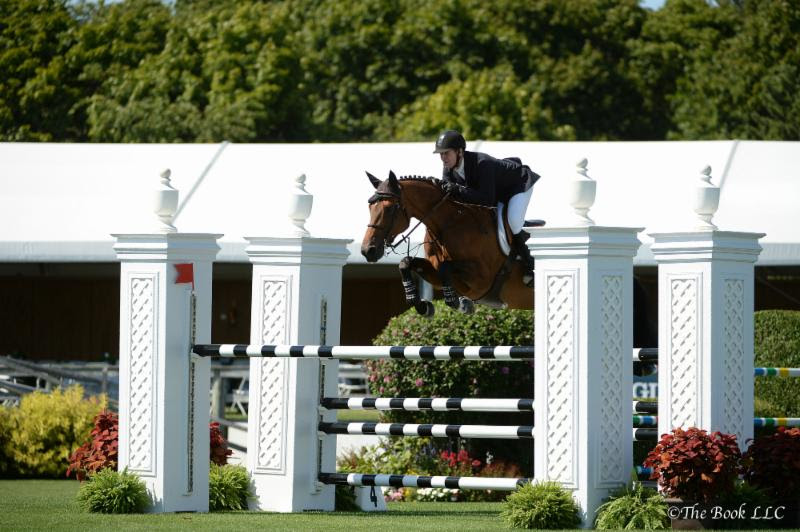 Bridgehampton, NY – August 28, 2016 – McLain Ward sped to the top in the $30,000 Boar’s Head Open Jumper Challenge, presented by Dan’s Papers, on opening day at the Hampton Classic Horse Show. The win marked the four-time Olympic veteran’s first competition since leading the US team to a silver medal at the Rio Olympic Games. Ward’s 2004 gold medal Olympic teammate Peter Wylde was second and Shane Sweetnam of Ireland was third.

Ward of Brewster, NY, riding Tina La Boheme, bested a field of 39 by going clear in the fastest time of 59.048 seconds on the Michel Vaillancourt designed course in the beautifully manicured Grand Prix ring. Sweetnam, winner of last year’s Longines Rider Challenge as the horse show’s leading open jumper rider, went fourth and set the stage with a clear round in 59.883 seconds on Main Road, owned by Sweet Oak Farm. That score held up until Ward, going in the middle of the pack, beat his time by a fraction of a second. Ward thought the class was a great way to start the week.

“It was a lovely class, a great welcome for the horses with nice prize money,” said Ward. “This is a mare who’s had a great year but hasn’t shown for a while because I have been away. It is a great comeback for her here. It was a nice smooth course but competitive enough.  The field was phenomenal. It was a great introduction for the horses.”

Wylde and Paloma, owned by Kathleen Kamine, had a chance to beat Ward going later, but had to settle for second with a time of 59.679 seconds. “The course was beautiful. It was a perfect size and it was fun to get back on this gorgeous field. The first time I competed here was 33 years ago, I was 18 years old. It’s such a beautiful venue and I am happy to be here,” said Wylde. “My horse was fantastic. I wanted to do a really positive forward round without going crazy and she came in second behind McLain. I was just thrilled with that. We love this horse. She is owned by the Kamine family. She is always doing great things so it’s very exciting to start off the show with a really good placing in a nice class.”

The Hampton Classic Horse Show runs through Sunday, September 4 at its pristine Bridgehampton, NY, venue. For this year’s 41st annual edition, a fourth FEI class has been added to the schedule in addition to more than 200 classes of competition for horses and riders of all ages and abilities. A wide range of hunter, jumper and equitation classes are offered at all levels, from leadline all the way up to grand prix. Classes are also featured for riders with disabilities.

In addition to the six show rings, the Hampton Classic features a Boutique Garden with more than 80 vendors for an amazing shopping experience, a wide selection of dining options and a Farmer’s Market, all on its immaculate 60-acre show grounds.

For those who can’t make it to the show grounds, a complimentary live webcast of all Grand Prix ring classes will air on the Hampton Classic website, produced by ShowNet and courtesy of LONGINES.  In addition, WVVH-TV, the official Long Island television station of the Hampton Classic, broadcasts up to five hours of competition and highlights each day during the Classic. These broadcasts can also be seen on line at www.wvvh.tv.  Most of the Classic’s other classes will also be available on ShowNet.biz.