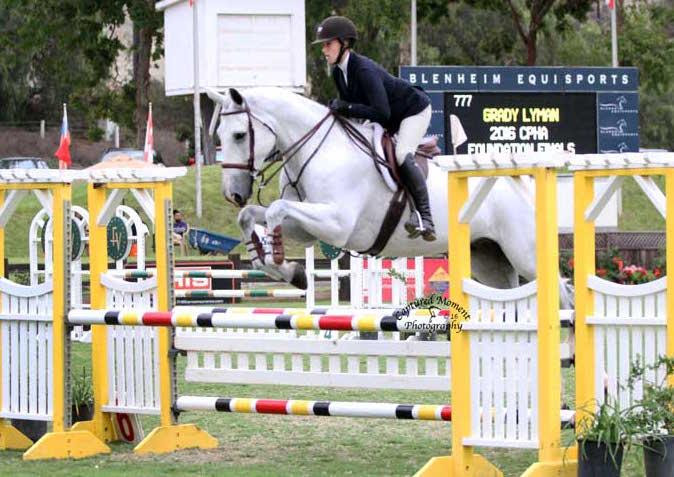 August 28, 2016 – Del Mar, CA – The Showpark Summer Classic hosted the California Professional Horsemen’s Association (CPHA) Foundation Equitation Championship Finals this weekend. Divided into 22 & Over, 14 & Under and 21 & Under age divisions, after completing Round 1 on Friday, courses with work-offs built in as part of the Foundation format, the competition continued Sunday morning with Round 2 and further work-offs as needed. The honorable Scott Williamson and Mark Jungherr judged the hotly contested event. After two days of tests, three champions stood on the top of the awards podium: Tonya Johnson, Elli Yeager and Grady Lyman.
With tests built in to each of the CPHA Foundation courses, the rules read that after two rounds, the riders with the top four scores and those within three points of the leader, or those with scores of 80 or better, would all perform a final series of tests at the judges’ discretion.

Johnson is All Business in the 22 & Over

Tests in Round 1 included a halt after fence 5b, cantering fence 6, trotting fence 9 plus some related distances and tight turn options. Drawing thirteenth in the order of go for day one, Tonya Johnson and her mount, Back In Business, scored an average of 87, which took over the lead and put Kathy Nolan’s score of 83 into the second spot. Neither of those scores were topped, with Jessica Smith, Laura Owens and Stephanie Goodson finishing third, fourth and fifth for the round with 81, 80.5 and 80, respectively.

First to go on Sunday morning, the 22 & Over section started off a busy final day. Built-in tests for Round 2 included a halt after fence 2, then picking up a counter-canter to fence 3 which was on a bend to the left. Once again, Johnson led the round with another score of 87 and had a commanding eight-point lead going into the work-off.

The top six riders, who each had a cumulative score of over 160, returned for the final tests. Nolan’s second round score reflected some inconsistencies in her ride; however, she returned sitting sixth of the top six called back. Finishing with the highest work-off score of all six riders, Nolan moved back into second place overall. Belle Calkin rode well on day two, moving from sixth to third in round two and with an 83 in the work-off, finished third overall.

Johnson had a rail at the first jump of the work-off, and although she was penalized slightly, her lead going in kept her on the top of the list, earning her the win by a narrow .375 margin.

From Northern California, Johnson trains with Hope Glynn, but came down south with Kelly Van Fleck to compete in these finals for the second time.  Along with a championship ribbon and sash, a stall plaque, fresh flowers, a gift certificate and more, Johnson will also travel home with the Victor Hugo-Vidal Perpetual Trophy.

She rode MaryKate Moulton’s Back in Business, known as “Willis” at the barn. “He’s amazing, big-hearted and a blast to ride. I’m so grateful for the opportunity to show him this year.”

As a mental skills coach, she liked how the courses had a variety of challenges and required some thinking. Author of the book, Inside Your Ride, Johnson tries to put her own advice into practice when she performs.

She has ridden since she was a child and remains excited and passionate about the sport. “I always am grateful every time I enter the ring. I enjoy learning new things and keeping my mental game fresh. I’ve worked on that this year.”

Johnson looks forward to competing in more medal finals this season, from Sonoma to Washington, D.C.

Round 1 for the youngest division started Saturday afternoon with 49 entries. Though they each may be only fourteen or younger, many have solid show miles already. Their tests in Round 1 were to halt after fence 6, which was in the bending line with 7ab, then canter 7ab and trot fence 9.

The best eleven trips all scored 80.25 or above, with the top score of the class, 88, earned by Elli Yeager riding Alant. The ten scores below Yeager were quite close, only two points separating first through fourth: Sydnie Young with an 87, Brooke Morin with 86.5 and Alexis O’Leary with 86.

Going into Round 2 on Sunday, it was still any of the top eleven rider’s final to win.

The tests on the second day of the 14 & Under division included a counter-canter to fence 6 of a left-hand turn and a hand gallop to the final fence 11, a single oxer on the long side.

The star of Round 2 was Saturday’s 80.25 score, Kaitlyn Lovingfoss, who moved from eleventh place to first with a score of 87 and a cumulative score 167.3 going into the work-off. As the scores came in, other positions in the top four shifted, with both Julia Stone and Payton Potter moving up into the top four, both consistently earning scores in the 80s.

With a good but not great round, Yeager slipped into third. The judges once again brought back each rider that scored above 160, which for this division meant the top four.

Jumping back into the number one position, Yeager earned another 88 for the top score and the win by one point with a total of 170. Coming in a close second was Julia Stone, whose score of 86 in the work-off gave her an overall total of 169. After coming in fourth last year, Lovingfoss moved up to third this season. Potter finished fourth.

Third time’s the charm for Yeager, as this is the third year she has competed in this final and her first win. Committed to riding, when asked about other hobbies or interests, she said that horses were it.

She was glowing about her horse Avant. “His barn name is Fidget. He is seven years old and a half thoroughbred. He’s absolutely amazing. I’ve shown him in a few Hunter Derbies, but this is only his second medal final.”

Yeager will take home the Hap Hansen Perpetual Trophy, sponsored by the Van Sickle Family and Shadowbrook Stables, along with a list of other awards, including a cooler from Damoor’s Feed & Tack, a bouquet of flowers, and more.

Lyman in the 21 & Under Limelight

Forty-nine of California’s best young riders competed for the top prize in the 21 & Under age division of the CPHA Foundation Equitation Championship Finals. The group rode two days of tracks developed by FEI course designer Anthony D’Ambrosio. The honorable Scott Williamson and Mark Jungherr moved from Ring 1 to the Grand Prix Field to observe and test some of the best equitation in the West.

D’Ambrosio’s first-round track consisted of 14 efforts, with two double combinations and two built-in tests, asking riders to trot fence 7 on top of the hill and halt before the last line heading home fences 11 to 12ab. It also demanded a smooth, flowing track.

In this field, the top fourteen scores were 80 or higher. Grady Lyman earned an impressive score of 90 in the first round aboard H Quito VH Parishof, three points higher than second place finisher Sydney McManus. Gracie Marlowe and Serena Anand rounded out the top four, with scores of 86.5 and 86.

As the final class of Grand Prix Field today, D’Ambrosio created a more technical track with 16 efforts, demanding the riders to be in control of each stride. The first test was two simple changes between fences 2 and 3, which if the changes went smoothly, were six strides apart. Competitors also had to counter-canter fence 6 on a left bend from fence 5. Other challenges included a double to a four stride line and a triple combination towards the end of the course.

Lyman once again topped the class with an 89, with McManus holding on to second, scoring an 85. While some riders had errors on course and slipped down in the standings, Kacie Doyle, winner of last week’s CPHA Amateur Medal Final, jumped into the third spot. Nine riders returned to work-off, once again each of them having a cumulative score above 160.

The work-off began with counter-cantering a jump, then after negotiating five more jumps in various directions, riders finished with a hand gallop and halt towards the line-up.

The work-off scores were announced at the same time as the top ten ribbon winners, in reverse order. The top four held their own; however, the highest scoring work-off round went to McManus, who earned a 90. Still finishing second, she couldn’t quite catch Lyman’s overall excellence, as her work-off scored an 88 and she finished 1.5 points in the lead. Doyle also had a high scoring work-off, 87, and earned the third place spot on the finals podium.

This was Lyman’s first year in the 21 & Under division, having just moved up from the 14 & Under. But she is not new to the winner’s circle, having won the 2015 PCHA Horsemanship Finals and 2015 CPHA Junior Medal Finals.

Her mount, H Quito VH Parishof, is a jumper that has only been in the equitation ring for a few weeks. “He’s a very quick learner and absolutely amazing,” Lyman noted.

Riding with Nick Haness, Karen Healey also worked with Lyman this week. Along with the Championship, a cooler from DaMoor’s Feed & Tack, a medal, stall plaque and fresh flowers, she was presented with the Barbara Worth Oakford Perpetual Trophy, sponsored by Hester Equestrian.

The action continues this week in Del Mar with the Showpark All Seasons Summer Tournament, August 31st through September 4th. Hunter highlights include the Sallie B. Wheeler/USEF National Hunter Breeding Championship, and Jumper highlights include the $45,000 Young Jumper Championships (YJC) West Coast Finals, the $20,000 Interactive Mortgage Horses 10&U Futurity Final, a $25,000 Markel Insurance Grand Prix Series Qualifier as well as an Interactive Mortgage U25 Developing Rider Series qualifier, plus the $50,000 Showpark All Seasons Grand Prix.

Photos by CapturedMomentPhoto.com and Blenheim EquiSports