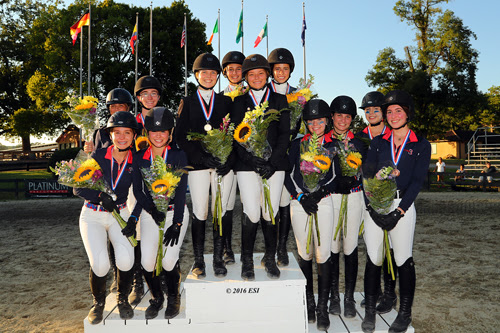 (C) ESI Photography
From Left to Right: Silver, Gold and Bronze medal teams pose in their team victories on the podium

Culpeper, VA (August 29, 2016): Riders descended on HITS Commonwealth Park for a shot at gold in the both the Team and Individual Championship at the USHJA Children’s/Adult Jumper Zones III & IV Championships that took place on Friday through Sunday at HITS Culpeper.

Team 5 finished the first round with 8 total faults, and the second round with zero faults. Going into the Sunday’s final round, the team had one elimination, but two clear rounds helped them come out on top when the class was done.

“It was a great competition. I think the entire HITS team did a fantastic job.  The specs and the rules were followed and all of the riders walked away with a great learning experience,” said Zone IV Chef d’Equipe Kim Land. “The team that won the Children’s really came together and supported each other. They came into the final round tied for second but 3 of the 4 riders jumped clean [in the final round] and that was very difficult to do.”

Both Team 1 and Team 2 came into the final round on Saturday with 12 faults. An exciting jump-off would determine which team would walk away with silver or bronze. Bailey Doloff of Team 2 went clean to score ahead of Grace Boston, Team 1, with 8 faults.

Manuel Esparza of Mexico City designed the course for the Championships, which presented a quality test for each horse and rider.

“The course rode nicely with enough challenges and was overall very well done,” said gold medal team member Alyson Gurney. “This was a fantastic experience; the best part was riding as a team, which is rare for our sport. I had a great time and I can’t wait until next year.”

Both Team 2 and Team 3 came into the finals with 8 faults, so an exhilarating jump-off on Saturday determined the gold. Alyson Gurney rode for Team 3, clocking in clean in 40.063. Courtney Logan rode for Team 2, stopping the clock at 40.150, fault-free, just fractions of a second behind Gurney.

“Every year the competition has been growing; the courses were perfect and continued to build up each day,” said Magness. “They were nice and technical and allowed the riders to leave with a positive experience. Two of the riders on the winning team ride and train with me so I was a proud trainer. It came down to a fast and exciting jump off and we were able to walk away with the win thanks to some great riding by everyone on the team.”

“Sarah, like her twin sister Grace who was second in the class, is a very dedicated and attentive rider,” said trainer of the top two riders Don Stewart. “They both have a huge desire to excel.”

The Adult Individual champion was equestrian Nicole Wood, riding her own Vendetta. The silver medal went home with Alyson Gurney of and Black Friday.

Bronze belonged to Courtney Logan of Gaithersburg, Maryland, aboard Prince Royal, owned by Patty Foster. Fourth place was Mallory Lobbiser of Arlington, Virginia, aboard her own Bainbridge and the top five closed out with Diana Harris from Creedmoor, North Carolina.