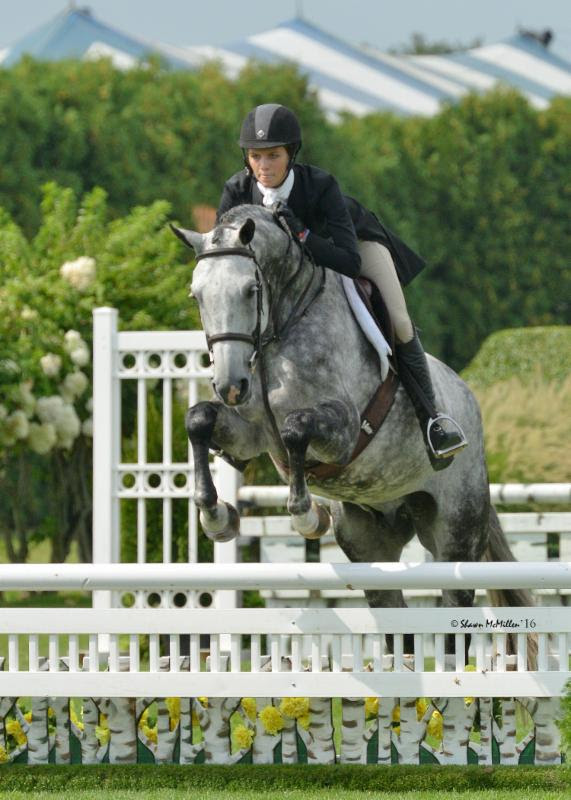 Schoelen, of Toms River, NJ, received an 82 in the first round and an 89 in the second to secure her victory in the 15-17 division. The second round score caught her by surprise.

“I was amazed. I never received a score that high before,” said Schoelen. “I started out in third after the first round and I ended up winning. It feels great.”

Schoelen has only had her 8-year-old Zangersheide for two years, but she has really enjoyed the experience. “My horse is so awesome. I have had so much fun with him. He is so cool, he does anything I ask him to do. He is just so great.”

“I was really happy with him,” said Topping. “He was such a good boy all day. I have only been riding him since March of this year, but he is so perfect and smart. He’s just a really good boy. I really like him.”Topping, 14, of Sagaponack, NY, received the highest score in both rounds to win the 14 & Under division and she gives all the credit to Perfektionist.

Topping has competed at the Classic since she was four years old. “I competed in leadline, but I didn’t win. I was happy to win today, it was fun.”

The Hampton Classic Horse Show runs through Sunday, September 4 at its pristine Bridgehampton, NY, venue. For this year’s 41st annual edition, a fourth FEI class has been added to the schedule in addition to more than 200 classes of competition for horses and riders of all ages and abilities. A wide range of hunter, jumper and equitation classes are offered at all levels, from leadline all the way up to grand prix. Classes are also featured for riders with disabilities.

In addition to the six show rings, the Hampton Classic features a Boutique Garden with more than 80 vendors for an amazing shopping experience, a wide selection of dining options and a Farmer’s Market, all on its immaculate 60-acre show grounds.

For those who can’t make it to the show grounds, a complimentary live webcast of all Grand Prix ring classes will air on the Hampton Classic website, produced by ShowNet and courtesy of LONGINES.  In addition, WVVH-TV, the official Long Island television station of the Hampton Classic, broadcasts up to five hours of competition and highlights each day during the Classic. These broadcasts can also be seen on line at www.wvvh.tv.  Most of the Classic’s other classes will also be available on ShowNet.biz.