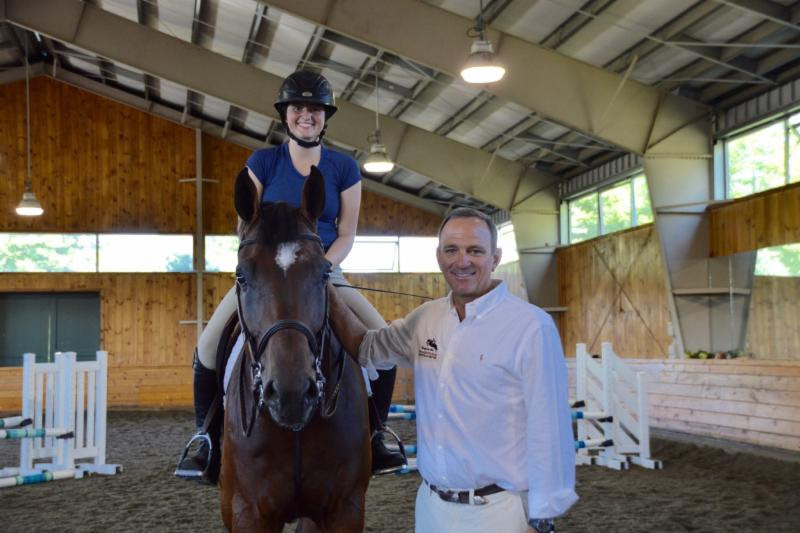 Wellesley, MA – September 2, 2016 – It was a busy week for students of the Dana Hall Equestrian Program beginning with a two-day clinic with two-time U.S. Olympic show jumping Silver Medalist Greg Best, followed by a successful week of competition at the Fieldstone Summer Showcase Horse Show.

The following week Best coached 12 Dana Hall riders at the Fieldstone Summer Showcase Horse Show in Halifax, Massachusetts in all different divisions, concluding the week with his students earning top placings in the Adult, Junior and Mini-Medal Massachusetts Hunter Jumper Finals.Best gave lessons to a select group of students on August 19-20, 2016 at the Dana Hall School’s Karen Stives ’68 Equestrian Center. Best will be serving as a full-time trainer at the Equestrian Center beginning in May 2017 and his clinics are being presented as part of the legacy of Best’s fellow Olympic medalist, the late Karen Stives. Best’s next clinic will take placeOctober 11-12, 2016.

Best, known for his partnership with the famed grey American Thoroughbred, Gem Twist, earned individual and team silver medals at the 1988 Seoul Olympics in addition to a team Silver at the 1987 Pan American Games. Founded in 1881, Dana Hall School in Wellesley, Mass., is an independent boarding and day school for girls in grades 5-12. Placing emphasis upon sound academic education and the preparation of each individual for college and for life, the School balances exposure to new ideas and the challenge of analytic and creative thinking with concentration on the development of self-esteem, leadership, and respect for others. As a school for girls, Dana Hall provides female students with a particularly advantageous environment for both education and self-development. For more information please visit www.danahall.org.Dana Hall is one of only a few New England schools to offer a comprehensive riding program and riding has been an option at Dana Hall since the 1930s. Located right on campus, the Karen Stives ’68 Equestrian Center offers complete stable facilities and classes ranging from beginner to advanced with instruction to suit every level of rider. With an emphasis on confidence, safety and control at every level, Dana Hall riders build confidence, self-discipline and teamwork. Approximately 100 students participate in the school’s program each year. The school currently houses 45 horses on the property with half of those boarded by students and half school horses. Students in the program compete at local and A-rated shows in the Northeast such as Saratoga, the Vermont Summer Festival, Lake Placid, Grazing Fields, and Fieldstone as well as the HITS Ocala Winter Circuit. Dana Hall is consistently represented at all the top equitation finals including the New England Equitation Championship, WIHS Equitation Finals, Capital Challenge, USEF Medal Finals and the Maclay Finals.