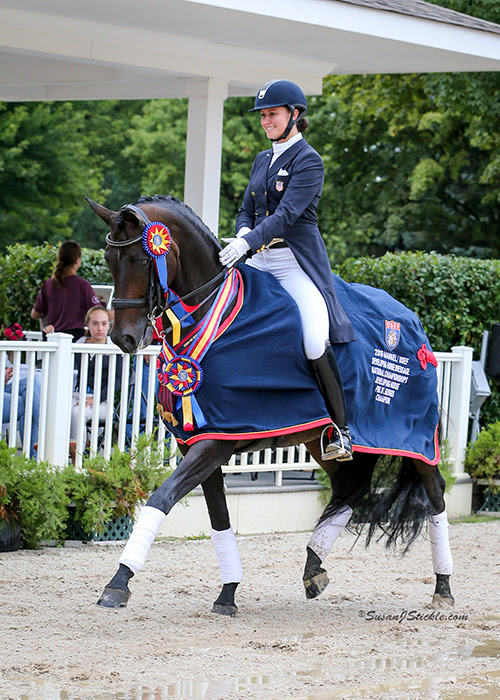 Lyle drew the first spot down centerline with Elizabeth Juliano’s nine-year-old Oldenburg mare Horizon (Hotline x Revue, Don Schufro). The pair set the bar high, scoring a 74.649 percent in the first day’s preliminary test. They held this strong lead the second day, and finished with an overall score of 74.272 percent, a four-point lead over their closest competitor. Lyle said, “Horizon is an incredible mare and she absolutely loves to compete! She handled everything with ease and never missed a beat. She was right there for me through every moment of both days of competition. I am very excited for the future of this special horse.”

Vita Flex Victory Team rider Adrienne Lyle has represented the U.S. at the 2012 Olympic Games and the 2014 World Equestrian Games with her now-retired partner Wizard. She united with Juliano’s Horizon a year and a half ago, and the pair made themselves known in Fourth Level and then the Developing Prix St. Georges with a highlight test score of 77.059 percent during the Adequan Global Dressage Festival in Wellington, Florida.

The Markel/USEF Young and Developing Horse National Championships was also an emotional competition for Lyle and her team, due to the recent passing of longtime supporter Parry Thomas. Thomas played an integral role in Lyle’s equestrian career, being the owner of mentor and trainer Debbie McDonald’s Olympic mount Brentina, and of Lyle’s prior champion mount Wizard. Lyle said, “Words cannot express what Parry meant to me. He took a chance on me as a young rider and gave me the opportunities to make my life what it is today. He was excited about the competition and loved dressage up to the day he went. He was watching over us in this competition, and we rode for him.”

Fellow Victory Team rider Wilcox rode to strong results with the seven-year-old Zweibrucker stallion Gallant Reflection HU (Galant Du Serein x Rohmanie, Rohdiamant) owned by Horses Unlimited Inc. The pair earned the champion title in last year’s 6-Year-Olds division, and finished this year’s Developing Prix St. Georges campaign with an overall score of 69.927 percent for fifth place.  Gallant Reflection HU, known as “Reef,” has proven his high performance potential to Wilcox, who has playfully labeled him as her “bright child.” She commented, “Reef is already showing his future potential as a Grand Prix horse. I’ve been schooling half steps and passage at home this summer, which has improved his collected trot. The other day he playfully offered 20 one-tempi lead changes. I don’t school this regularly, and was in shock as he just kept going!”

Lyle also uses several Vita Flex products regularly. “The E-500 helps keep Horizon’s skin and coat looking great, as well as helps her immune system stay strong during the stresses of travel and competition,” Lyle explained. “Training and competing at the level that Horizon does requires a lot from a horse’s muscles, and Lactanase helps Horizon’s muscles stay happy and healthy so she can perform her best. In addition to daily powder electrolytes, Horizon also gets a boost of AccuLytes paste before she travels or during competition, to ensure that she is drinking enough to stay properly hydrated.”

The Vita Flex Victory Team is comprised of many world-class riders, including Lyle and Wilcox, from all disciplines. Vita Flex offers top equine supplements that span from antioxidants, electrolytes, and joint supplements to topicals, vitamins, and minerals. Vita Flex® products are researched and tested by equine nutritionists and veterinarians, and have been relied upon for more than two decades by owners, trainers, and top riders.