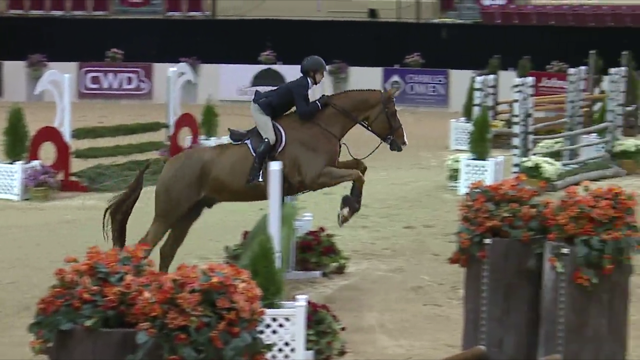 Oct. 8, 2016–Upper Marlboro, MD
The adrenaline rush of a competitive equitation final isn’t just for the under 18 crowd. The Ariat National Adult Medal Final, held each year at Capital Challenge, gives adult riders a go at the big eq adventure. The class is held at select horse shows across the country during the year with riders collecting points to qualify for the Finals. Only the top 30 make it to the final.

One of this year’s riders was Rachel Van Allen. The full-time student athlete is on the Baylor University NCAA Equestrian team. If you had checked in with Rachel mid-summer, she would have told you that she’d be in Waco this week, not on her way to Capital Challenge.

“I qualified on my 5-year-old horse this summer at horse shows in Oregon.” Van Allen’s 45-acre local barn is Oz Incorporated located just north of Canby, OR.

“I had not even planned on going back east this year, but when I started to be successful in the Ariat medal classes, we entered in every show to try to qualify,” said Van Allen. It was late August before she was sure she had a spot on the short list. Then another two weeks before Van Allen and her mother Ann were sure they could make it all work.

Van Allen trains with Jeff and Shelley Campf and Dustin Goodwin out of Oz Incorporated. Rachel’s mount for the final was Legatus, owned by Megan Godsby, an Oz barn mate. “She rode here last week and was kind enough to let me borrow him for the final.”

So what was it like to be competing in the Ariat National Medal Final for the first time?

“I’ve never been around so many nice horses and good riders. It can be intimidating knowing that even if you go in and lay down a really good round it may not be enough. Everyone is just that good and attentive to detail,” said Van Allen noting the distinct environment at Capital Challenge. “The atmosphere is definitely different than anything I have experienced. So many fancy horses and amazing riders,” she said.

Van Allen went second in the order and laid down a great trip. The top ten were called back for round two. She ended up at the apex of wonderful and terrible—she was 11th. Van Allen opted to embrace the wonderful—she is grateful for the experience. She relished the time spent with fellow riders and clearly made the most of an unexpected opportunity.

“I was on a catch ride, this is my first time here and I had never been in the ring before today.” You can follow Rachel Van Allen via the Baylor University Equestrian Team.