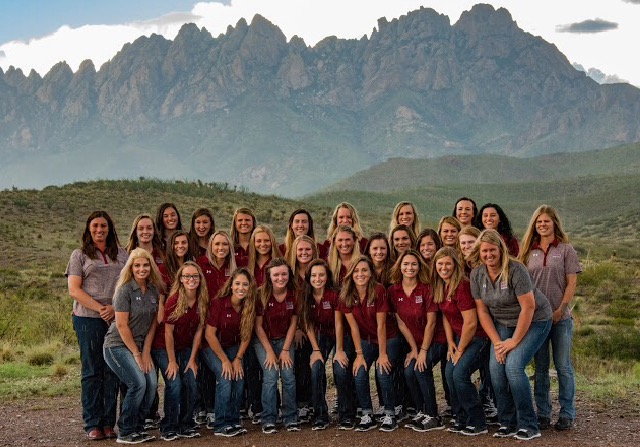 Thirty days before school started, the whole New Mexico State University NCEA team got a devastating call: their team would not be funded by the school in the upcoming year. Therefore, there was no team. For freshman Erin Gordon and senior Kate Crine, this was the worst days of their lives.

“This team is my family, my life. I couldn’t even wrap my head around the concept of no longer being a student athlete or that none of my teammates would be back at school with me,” Crine said, describing what she felt when she heard the news. For many, the team was where all of their friends were, and where they went to escape from the pressures of college. Many girls thought about transferring schools. Yet, with only thirty days until school started, transfer was nearly impossible and the loss of credits would push some back a full year in school.

In an effort to raise money for their team so that they could compete, the team created a Go Fund Me account in hopes that supporters would help them with funds.

“The Go Fund Me was a decision we all made as a team. We knew that we needed to fight for our team, and we know that the numerical goals set for us are a bit scary to think about, but we need all the help we can get,” said Gordon, a freshman at NMSU. In order to be self-funded, the team needed to raise a staggering $417,000. However, to put that into perspective, the NMSU FBS Football team has recently increased their budget to $7.0 million. While this may seem extremely frustrating, the team stayed positive, and the incredible amount of support they received paid off.

After a few days of shattered hearts, the team was given good news: the NMSU NCEA team would continue for another year. Recalling her emotions from that day, Crine said, “I remember after I got the call from James Hall, my fellow senior Jaimie Story called me and we just started sobbing on the phone. We are all really grateful for this year.”

Gordon’s reaction was similar, saying that, “When I got the email, I broke down crying tears of joy. I had never been so relieved in my life.” Through this roller coaster of events, the NMSU team stayed strong. This year is a big year for them, and they have no doubt that it will not be their last year.

“We have set a vision that we will become a self-funding team. We plan on fundraising just like every year before us. We really want to focus on our showing and riding and not have a lingering cloud above us about funding. We know it is there, but we are trying our hardest to diminish the fog we are in and have a phenomenal year full of fundraising and showing,” expressed Gordon on behalf of the entire team. In focusing on their riding and not on the financial pressure they are under, the NMSU NCEA team hopes to have the year of their lives.

Sue Padilla, the National Collegiate Equestrian Association’s (NCEA) National Advisory Board (NAB) representative for NMSU worked on behalf of the equestrian team with the University’s athletics department.“Our appeal before the Board of Regents was heard. This year gives us time to do everything possible to fund this program for future years.”

The initial decision to discontinue funding of the program was made after careful consideration following recent cuts to the university’s budget due to declining state funding and declining enrollment. Other cuts include eliminating vacant and filled positions around the university, eliminating the on-campus employee health center and beginning the process to eliminate the engineering surveying program.

“The Athletics Department needs to cut its budget, much like the rest of the university, but we will be able to accommodate this year of the program,” NMSU Director of Athletics Mario Moccia said.

“I am confident that we are moving forward past the one-year extension given by the University”, stated Padilla. “We have identified multiple sources that are looking to help support the equestrian program financially and meetings are happening this week.”

Supporters of the NMSU equestrian program are seeking private funding to make the program self-sustaining. NMSU supports this approach as advocates to fund the program at a competitive level. Additional information available here.

With their first few meets behind them, NMSU Equestrians have moved into 9th place in the NCEA national rankings.

6 Pieces of Advice for Competing at IEA Nationals