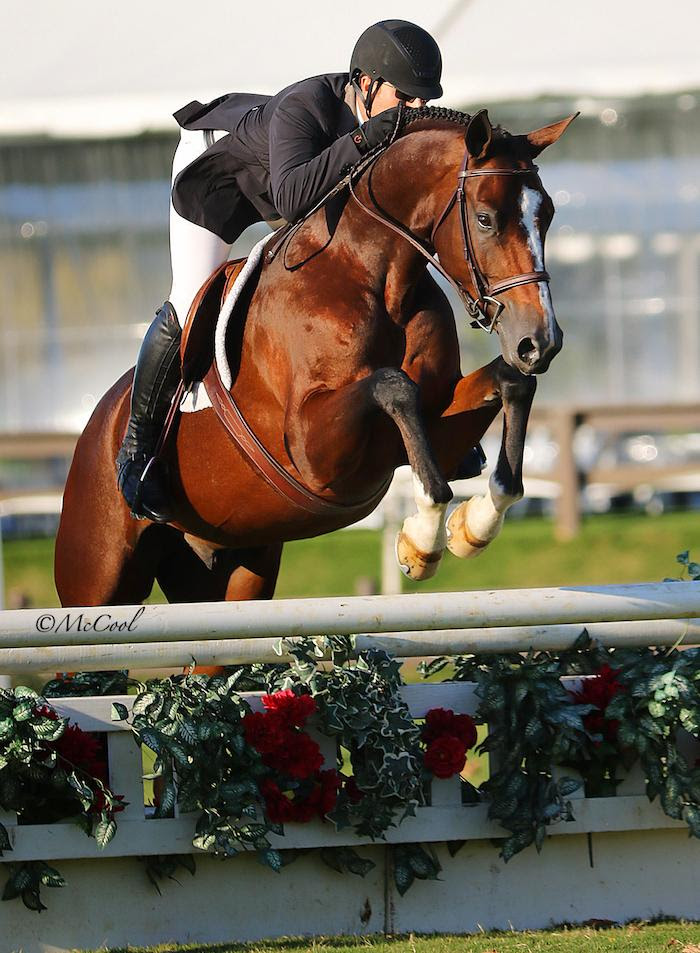 Through nomination fees, the CPHA Pre-Green Incentive Program offers an opportunity for young hunters to win prize money year-round in Incentive Stake classes, and also participate in the fall season Championships, all on the West Coast. Before the class commenced, the CPHA recognized the top three Leading Horses and Riders with awards and bonus checks.

Two of those top three horses and riders, the flashy chestnut Top Shelf with Katie Gardner riding and the handsome bay Bandit, ridden by John French, were also second and third in the Championship.

Only in its second year, the amount of participating horses more than doubled, resulting in an increased payout.

With eleven horses in the 3′ section and six jumping 3’3″, the courses were designed by California’s own Scott Starnes. Winning rider Haness complimented the track.

“Nothing was too challenging or overfacing, the courses had a nice flow. There was a bending line, and a two-stride, which was appropriate for the young horses,” he said. “There were a few long gallop, single oxers which work well on the big grass field to show a little brilliance and teach the horses at a young age to gallop and jump well. Those who did were rewarded.”

The top 12 horses with the highest scores from the first round returned for a second, classic-type round. Sitting second after round one with a score of 87, Enzo and Haness topped round two with a 90, for an overall average of 88.5.

Top Shelf and Gardner came in with a score of 90 from round one, plus an 84.5 in round two, finishing second with an average of 86.75. Also scoring well, Bandit and French earned an 85 and 85.75 for an average of 85.375 and third place. Overall, the top ten prize winners were all within an eight point spread, with tenth place, Bansky and Lenny Marconi, earning an average of 80.5.

Spectators, owners and trainers enjoyed a wine and cheese reception during the event, generously sponsored by John Bragg and Bridgeport Farms.

“This is Enzo’s first year campaigning and showing. He learned to jump this past winter at Thermal and has come a long way in a few months!” Haness noted. “This is one of his last shows for the year. He will have a nice vacation to gain more muscle and weight and be ready to shine in the First Year Greens in 2017.”

Pleased with the program’s progress, CPHA offered a special thanks to Blenheim EquiSports for hosting throughout the year and supporting these young hunters with a Championship. CPHA Executive Director Ruth Frazier said, “Thank you to Stephanie Wheeler, Melissa Brandes, Sarah Abdi, Alex Rheinheimer, Walter Navas and the horse show staff both at the ring and in the office for their effort and hard work to make these Championships such a success. The course designer, Scott Starnes, and his crew do a commendable job and it is greatly appreciated.”

Cover Model Todd Minikus Proves His Worth With a Multitude of...