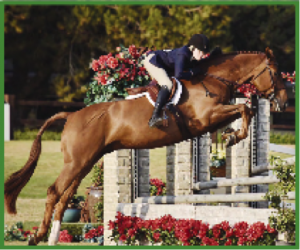 Elli Yeager of Ingenium Farm was once again awarded the title of Top Junior Rider in the $15,000 USHJA International Hunter Derby at Blenheim Equisports Showpark Racing Festival. Yeager and Copperfield 39 received a white ribbon and a custom Plaid Horse wool cooler after scoring a total of 333.5 points. The courses were difficult, but Yeager guided her mount with precision. “The course design for this class was excellent! My horse was great and very handy. I had a lot of fun competing in the class! Tasha was open to me doing the higher options and tidy inside turns which was a lot of fun. Going into the class all I wanted to do was have fun, and I did!”

The first course consisted of many high option jumps. The line from fence seven to eight proved especially challenging, a wall to a hay bale option of 4’0″ or 4’3″. Seven riders took all of the high options, but Yeager played it safe and took four of them. The Handy Round had ten challenging obstacles. The course began with a choice bending line, fence one being an oxer and fence two the hay bale jump. Next, riders rode up the hill to the trot jump and back down the hill to jump four, a barrel fence, then to a U-shaped vertical off a challenging right turn and a rollback to a wide fan oxer. The final combination was an option vertical to vertical off a right turn and then the final oxer. Copperfield 39 began the Handy Round in seventh place. A stellar performance with tight turns and high options elevated him to a fourth place finish and the top junior rider award for Elli. The Ins and Outs of Equine Appraisals