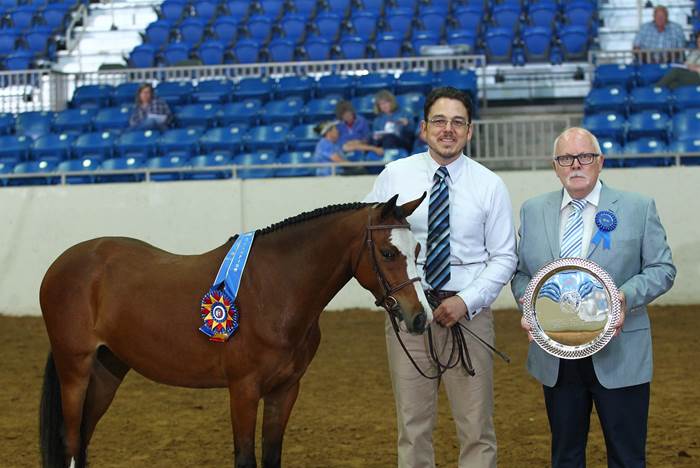 The American National show is the most prestigious Welsh Pony show in the United States, drawing competitors from throughout the country.  In total over 170 ponies competed at the four-day show in Tulsa in halter, ridden and driven classes, and the Chorneys were the only Canadians competing at the event.

The Chorneys had never attended the WPCSA National Show before and decided to make the long trip to Tulsa after Exeter Evenstar earned several Grand and Reserve Grand Championships in July at the Wild Rose Welsh & Open Pony Show held in Red Deer, Alberta under all three judges. One of the judges, Molly Rinedollar of the United States, remarked, “Exeter Evenstar is a lovely pony. She has an incredible walk and an equally good trot! She will be an amazing hunter pony with lots of Welsh attributes!”

Exeter Evenstar also competed at the Devon Horse Show in Devon, Pennsylvania in May of this year, finishing 7th in her class with handler Morgan Shortt of Meaford, Ontario.

Exeter Evenstar is by Northwind Catcall, bred by Prue Richardson of Northwind Farm in Ontario, and he was Grand Champion at Devon, PA as a yearling in 2003. And she is out of Alvesta Brianna, bred by Brenda Podolski of Alvesta Farm in Alberta and she was Grand Champion of the Stars of the West PTF Challenge Cup in Calgary, AB as a yearling in 2011.