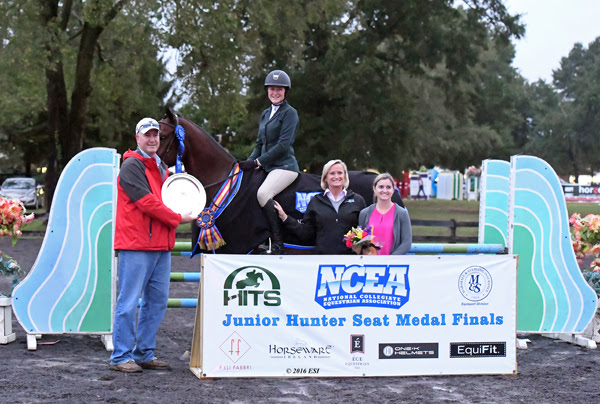 “We were incredibly thankful for the support we received from HITS and the sponsors,” said Executive Director of the National Collegiate Equestrian Association, Dr. Leah Fiorentino. The riders were so excited to ride in the bracket format on brand new horses. It was one of the highlights that they all spoke about. Looking ahead, we’re quite excited for the West Coast finals; there were many riders engaged in the NCEA Medal classes on the west coast, so we’re hopeful that the Finals at HITS in November will have a good turnout.”

“It was a wonderful event, it was a lot of fun to watch the riders in the finals compete over the head-to-head courses,” said University of Auburn Women’s Equestrian Head Coach, Greg Williams. “It was a great test for the riders, and from what I overheard from the coaches and the riders, everyone really liked that part of the format. I absolutely see an upside to this event in the future.”

The West Coast Final will be hosted at HITS National Sunshine Series in Thermal, California, onNovember 9-13. Junior riders on the West Coast, will have the same opportunity to compete in front of collegiate team coaches.

“This opportunity is fantastic for the riders coming out of the junior ranks and into the college program,” said Showplace Productions owner and manager, Pat Boyle, whose daughter rides on the No. 1 Auburn University Equestrian Team.

Boyle continued to compliment the NCEA Medal Final saying, “the number of collegiate scholarships available for these riders is growing, and with the notoriety of the program and of this class, I think it will really add to the knowledge of the sport. The overall competition level of the riders was also very impressive going into the NCEA.”

Maryland-based trainer Patty Foster, who is also a parent to collegiate equestrian athlete also praised the program. “The NCEA Medal Final, and the format of the class, really gives the riders an idea of what competing on a team is like before they actually get to that level.”

“HITS was honored to host the East Coast NCEA Medal Final at HITS Culpeper, it was a successful event, and we’re looking forward to hosting it again on the West Coast at the National Sunshine Series in November,” said HITS President and CEO Tom Struzzieri.

Last weekend on the East Coast, Ana Bertozzi of Leesburg, Virginia, topped the field of riders to win the Championship, with the Reserve Champion going to Hannah Matts of Oakland, New Jersey. Third place went to Lauren Rachuba of Woodbine, Maryland, and rounding out the top four was Emily Leins from McLean, Virginia.

“Thank you to everyone at HITS for supporting this great class and our two Finals both East and West coasts,” said NCEA National Advisory Board member, Tom O’Mara. “Additionally, so many great sponsors have offered to support this event, including Horseware Ireland, One-K Helmets, EquiFit Boots, Fabbri Boots, ECE Equestrian Shirts, Threadneedle, Go Girl Energy drinks and Perry Communications.  Thanks all for making our inaugural year a huge success.”

Riders met for a riders meeting the morning of the class to draw for the order-of-go, where they also enjoyed a breakfast buffet, compliments of Marshall & Sterling Insurance League.

The Finals consisted of three-phases: Over Fences phase, Flat phase and a Bracket phase, judged by Frank Willard of Oak Ridge, North Carolina and Kim Dorfman of Aiken, South Carolina.  Riders competed over a 3’3” course designed by Florencio Hernandez of Mexico City, in hopes of claiming the prestigious title.

Riders competed under a unique format, which combined a Medal-style course and a flat phase, with the bracket-style competition used at NCAA competitions. The riders that moved onto the bracket phase were determined by their combined jumping and flat scores, where they came back to compete head-to-head on a neutral horse— this gave the riders a taste of the competition format faced when riding for an NCAA team.

It all came down to the ride-off between Ana Bertozzi and Hannah Matts to determine the overall winner. The judges critiqued each rider in their craft, carefully accessing the horsemanship and equitation skills of each equestrian as they rode for the win: Matts competed first, followed by Bertozzi. It was a close match as Bertozzi prevailed, edging out Matt’s score by just one point.

“The original course gave the riders a lot of different options and questions, and the two test rounds rode really well,” said Michael Bertozzi, father and trainer to Ana. “Ana has been able to do a fair bit of catch-riding and practicing on different animals, which helped her prepare for the class. The idea of the class is a very good one.” NAL Finals to Be Held at Capital Challenge Horse Show