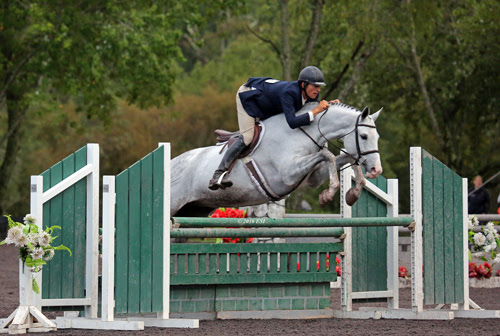 (C) ESI Photography
David Wilbur and Adore on their way to a $5,000 Devoucoux Hunter Prix win.

Culpeper, VA (October 2, 2016): Exhibitors from the East Coast and beyond traveled to HITS Commonwealth Park for the final weekend of competition, but only one winner could be crowned in each Hunter Prix: the $5,000 Devoucoux Hunter Prix and the $1,500 Platinum Performance Hunter Prix.

$5,000 Devoucoux Hunter Prix
The top five riders would claim multiple ribbons in the class, but a HITS Champion returned to the ring in Culpeper to once again claim a winning title. After staking claim to the second-annual Stal Hendrix Pre-Green Futurity at the HITS Championship in September, David Wilbur piloted Adore, owned by Stephanie Ray, to another blue ribbon.

The Ocala, Florida equestrian rode the stunning grey mare to an impressive first-round score of 88, the highest of the round. After the top 12 returned for the second round of the classic, Wilbur and Adore once again swept the competition with an 88, totaling 176 for the victory.

Wilbur also captured the final spot in the top five aboard Fila, owned by Taylor Lampert. They earned an 84.5 in the first round, and a 79 in the second round for a total of 153.5 for fifth place.

Second in the ribbons belonged to Caitlin Venezia-White of Marston’s Mills, Massachusetts, piloting Waterfall, owned by Jennifer Combs. Together the pair earned a first-round score of 86, followed by an 88 in the second-round to total 174.

Venezia-White would also garner fourth-place with Spottless, owned by Heather Georges. They earned scores of 82 and 84, respectively, for a total of 166.

Melissa Feller of Flemington, New Jersey, took Shameless to the third-place ribbon with a first-round score of 85.5 and a second-round score of 85 for a total of 170.5. Feller would also earn a second ribbon in, sixth place, aboard Chanel owned by Sloan Hodges.

The Canadian Children’s and Juniors Take Back to Back Wins!