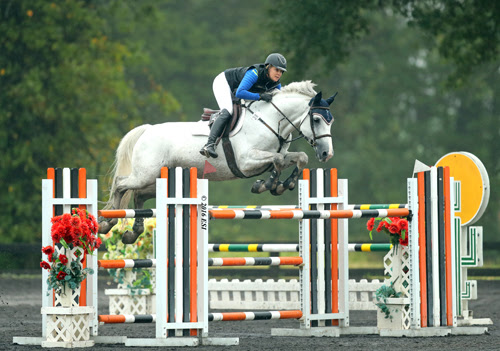 Culpeper, VA (October 1, 2016): Exhibitors turned out for the final week of the Culpeper Show Series at HITS Commonwealth Park and the weekend kicked off with the $25,000 Brook Ledge Grand Prix on Friday afternoon.  Everyone was hungry for the winner’s share and the top five contenders would be separated by only fractions of a second for an exciting race against the clock.

It was a good day for MTM Farm. Tracy Fenney not only walked away with the victory, but with the third-place prize as well.  Her winning mount, MTM Reve Du Paradis, brought home the blue over the course set by Florencio Hernandez of Mexico City. Fenney garnered third with MTM Como No.

The Flower Mound, Texas, equestrian was the first to enter the ring and put down a clear round to set the tone for the remaining order right off the bat with third-place mount, MTM Como No. They stopped the clock in 33.707.

Following Fenney was Mary Lisa Leffler of Brookeville, Maryland, aboard Bling Bling, owned by Rolling Acres. They put down a solid round right behind Fenney, and edged her ride by mere fractions with her 33.175-second round. Leffler would take home the second place prize when the class was finished.

Dorothy Douglas, also of Flower Mound, Texas, went ninth in the order, laying down a fault-free trip with S&L Elite in 33.817. Their round would earn them fourth place, sealing the third top-five finish for MTM Farm.

Fenney and MTM Reve Du Paradis followed Douglas to put down the quickest of the eight that went clear to contest the immediate jump-off. Their speedy time of 32.212 with no faults conquered the rest of the field to take home the blue.

The top five rounded out with Ocala, Florida, rider Ian Silitch and Cordovo, owned by Gaston Family Investments. They passed the timers in 37.571 with all of the rails up to seal the final spot in the top five.

Fenny and Douglas have had a successful fall competing with HITS. Both Douglas and Fenney finished in the prestigious top four at the HITS Championship recently in Saugerties, New York. In the $500,000 Diamond Mills Hunter Prix, Fenney captured third place and Douglas finished fourth.