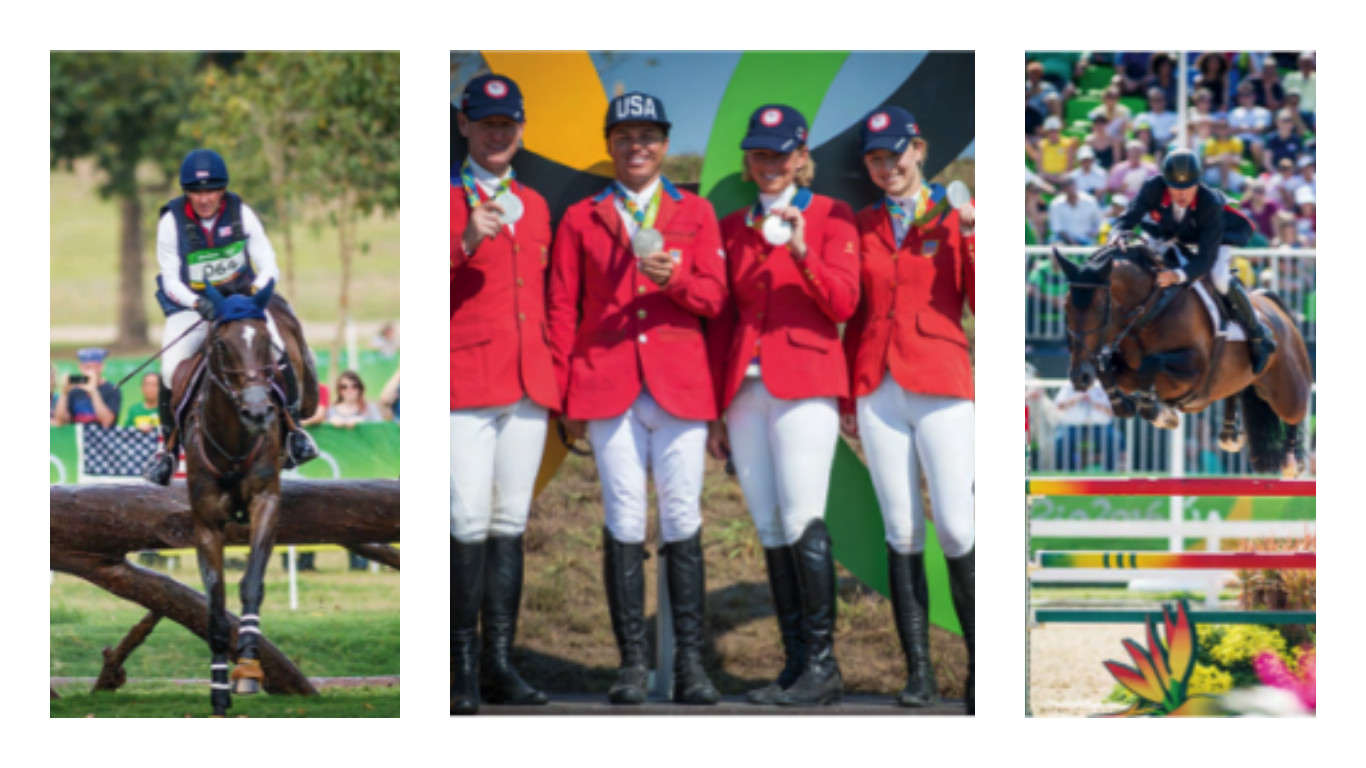 RIO RECAP: The United States was one of only two countries (with Germany) to win medals in all three of the equestrian disciplines: dressage, show jumping, and eventing. We won Team Silver with our show jumping team, Team Bronze with our dressage team, and Individual Bronze in Eventing.

92, Laura Graves (Geneva, FL) on Verdades, Kasey Perry-Glass (Orangevale, CA) on Dublet, and Allison Brock (Loxahatchee, FL) on Rosevelt. Peters, age 52, is a four time Olympic veteran. On his successful 14 year old partner, Legolas 92, he delivered “one of the best tests of his life” in Rio to lead the team toward Olympic bronze. Kasey Perry- Glass and Allison Brock were first time Olympians who turned in solid and confident tests throughout the Games.

Laura Graves and her own Verdades wrote the next chapter in their fairytale story by exceeding the elusive score of 80%, one of only five Olympic riders to achieve the milestone. At the age of 14, Graves and her mother bought Verdades as a foal from a video tape received in the mail. The road to success was winding and bumpy with an amateur rider and a tough, talented horse. With persistence, ambition, and great help from the best in the profession, Graves and Verdades were the stars of our Olympic dressage team.

The eventing team competition did not go as well as expected. After the dressage phase, the team sat in seventh place going into the cross country phase, the heart of eventing competition. Over a course which was assessed as very difficult and technical, only two of our riders finished. Montgomery retired on course and Kieffer had an unfortunate fall. Our only chance for a medal was in the individual competition. The individual standings are determined by the top 25 riders advancing to an additional stadium round. Going into the individuals, Dutton stood in fourth place. With a four fault second round, he was good enough to advance to third place and a Bronze Medal. Of Might Nice, Dutton said,” I don’t think I have had a horse with a bigger heart.” A six- time Olympic veteran, the 52 year old Dutton hopes to make it back to a seventh Olympic Games in 2020.

After the first round of competition, Madden was forced to withdraw Cortes ‘C’ because of a tendon injury. The withdrawal left the U.S. with a team of three riders, meaning that with no drop score, every round counted. The pressure was on the remaining team members. The course consisted of a 1.60 wall as an early jump and a very tight time allowed. Of the 44 starters, only 15 were within the time allowed, and five were clear. The United States finished on a five fault score after two rounds. Farrington had only one time fault, Davis had four faults, and Ward was a masterful double clear. The United States earned a team Silver Medal with France winning Gold and Germany Bronze. It was an impressive American finish. Farrington summarized the feelings of the whole team. “Just to be on this team, to be in my first Olympics and win a medal is a fantastic feeling. There is no greater honor than representing your country.”

The individual competition proved to be a climactic close to equestrian competition. Twenty seven qualified horse and rider combinations contested two challenging rounds to determine the individual medals. In an unprecedented result, six horses were double clear and jumped off against the clock, an unusually large number for a class of this caliber. In a moment worthy of a Disney movie, 58 year old veteran British Olympian Nick Skelton won the Gold on his mount, Big Star. Both horse and rider were unlikely favorites, each with a string of significant injuries over the years. Yet, Skelton knew his horse was up to the task. “He’s the best I horse I am ever likely to have.”

The Individual Silver Medal was won by Peder Fredicson of Sweden with Canada’s Eric Lamaze bringing home the Bronze. Kent Farrington was the highest placed American rider, ending up in fifth place.

The 2016 Olympic competition was a breathtaking spectacle of equestrian achievement. For those who understand the challenge of perfect symbiotic motion of horse and rider, the performances are nothing less than herculean. For uneducated viewers, there is beauty, athleticism, and grace. For all, the world’s best horses and riders are something to behold.