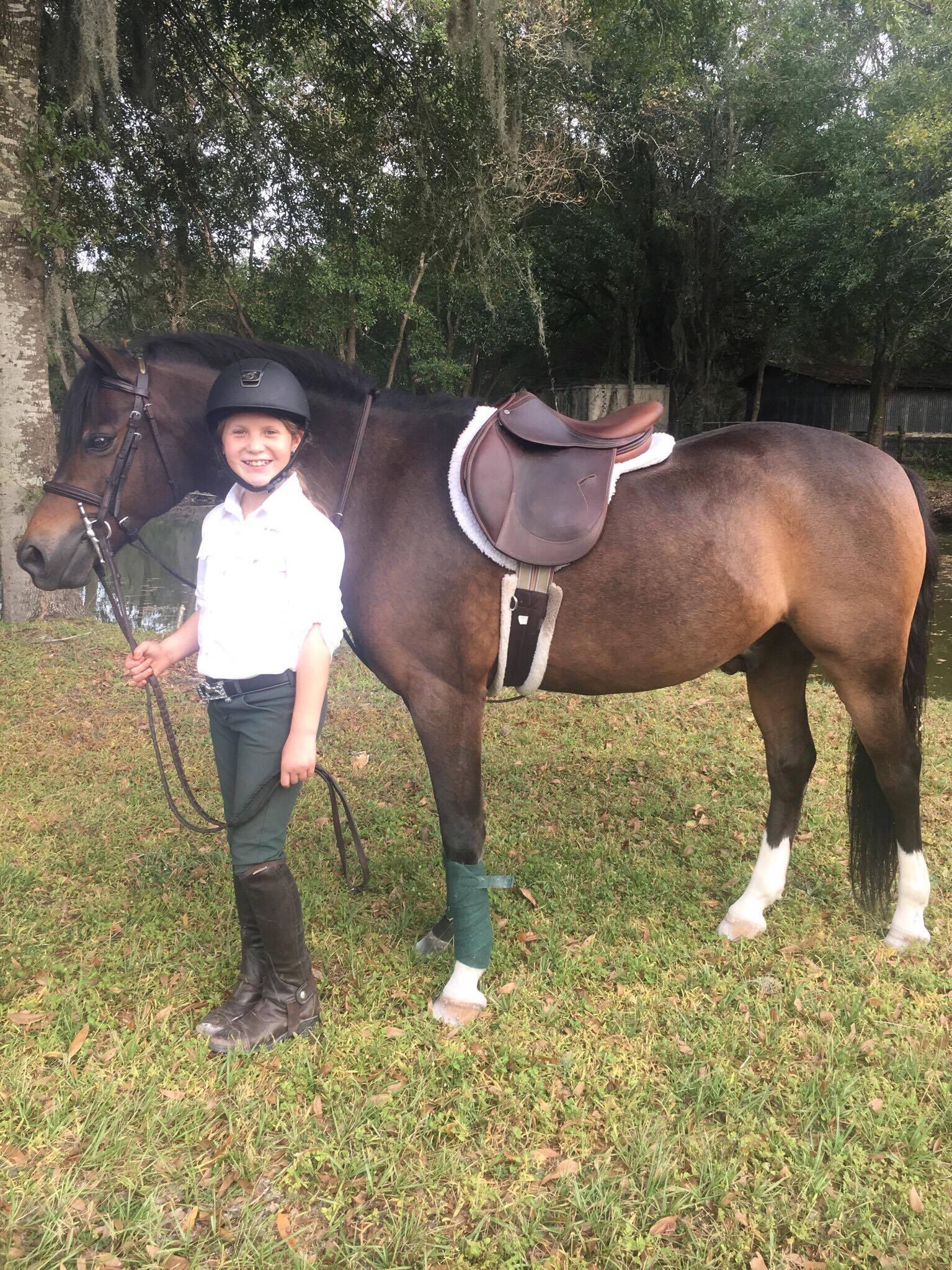 It was February of 2016, and within a period of one month, I moved from the short stirrup to children’s pony and then right into Small Pony Division. Apparently my trainer, Clair Kellner, felt my legs were swinging all over the place! She made up a dance making fun of them! It was then that she said, “I have an idea.” The idea was to make me do ALL my lessons with no stirrups. Kind of like No Stirrup November, but more like no stirrups for a year! The first day was probably the worst day. I would say that I never appreciated how important your stirrups are to you. The pony turned left and I went right. Right down his right side! Fortunately, I bounced right up with just a torn shirt and slightly scraped elbow. At that moment, we reviewed the importance of heels down and a tight leg!

Since I moved up fairly quickly, I had a whole bunch of new challenges. You now have to ensure you have the right numbers, get your lead changes, and be handy at the same time. It’s kind of like jumping up and down on one foot, patting your head and chewing bubblegum all at the same time. I have a very special equine partner named Sir Dragon, who is 11 years old, and has plenty of experience. He literally teaches me all the time. For the first month I would say that I was a hot mess. Bouncing all over the place.  Poor Dragon! As time went on, I got stronger, much stronger. I also became quite motivated. Pony Finals (my first one) was 4 months away and I so badly wanted to improve my riding before then.  Dragon’s prior kid Brooke Farrell already qualified him, but I wanted to do it myself. In March at HITS Ocala, I was able to get a reserve champion and qualify him as well! Over the next four months I did all my flatwork with no stirrups. Once my heels were good and my legs stopped swinging, Clair allowed me to jump.  Dragon and I practiced as hard as we could so that we could do our very best at Pony Finals.

Since it was my first Pony Finals, I will admit I was so excited! I had been working so hard and wanted Dragon and me to do the best we could.  Clair told me I was ready.  Modeling was not my strong point. The under saddle portion was so fun! My mom said that my smile was so big the entire class that she is surprised I did not have bugs stuck in my teeth. Dragon and I were second in our group of 12.  The following day was the over fences and I was ready. I felt like I swallowed a swarm of butterflies, but I was not going to let them scare me. We went to warm up and once Dragon and I were doing our thing, the butterflies flew away. I went into the Walnut Ring with my heels as low as they could physically go. My legs were so strong and were not going to move! I thought my round was very good and one of the judges gave me an 82. WOW! I could not believe it. It was quite the nail biter right up until the end. I ended up 21st over fences and with the high under saddle score I was 19th overall. I actually got a ribbon! It was a beautiful salmon pink color and Dragon and I got to do the victory gallop around the Walnut Ring.

I have to say that I owe that ride to Clair, my trainer. Because she pushed me to get strong and not give up, it truly helped me to be successful at Pony Finals. Every now and again Dragon tests/teaches me, and I am able to handle whatever he throws at me because I am stronger and have a better position. I would say that over time it is a lot easier to be without my stirrups. Not completely easy, but I do not want to quit and go back to them. I see how such a simple change made such a big impact in my career.

I asked Clair why she inspired me to do this. She said, “it brings out toughness and grit that nothing else can do. It essentially is a way, without speaking or putting into words, for kids to get tighter. I don’t have to say put your leg here, it automatically goes there. It also teaches dedication. It is really only fun when you see how much it has improved you. Equitation was invented for a reason! When your leg, seat, and hands are where they should be, collecting, lengthening and straightness can happen…easily.” Let’s be honest, when I started I thought Clair was mad at me or trying to punish me. Now I know that she actually loves me, and wants me to be the best I can be!

So as we approach No Stirrup November, I want to inspire others to take this month seriously! Trust me, if I can do it for one year, you can do it for one month. With a little bit of effort, you can really make a big difference. I promise to keep up my hard work through February!

4 Simple Ways to Get You Started on Running