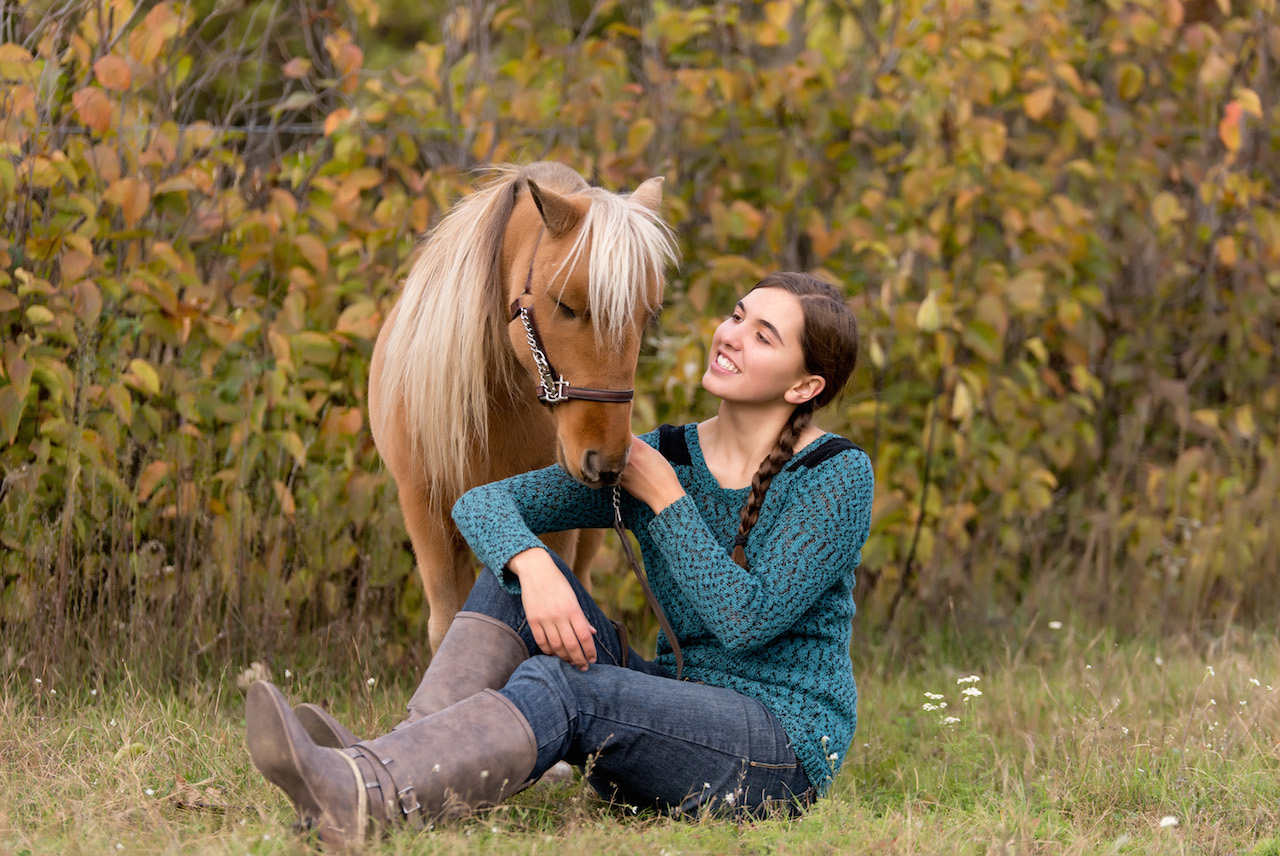 Aimee Schulz, a sophomore at Iowa State University with a major in genetics, is the recipient of the 2016 Andrew Ryback Photography and The Plaid Horse $2,500 scholarship. The award was announced by Andrew Ryback and Piper Klemm, PhD. Aimee is one of the captains of the ISU IHSA team. In 2016, she was the first member of the team to qualify for and compete at IHSA Nationals. The scholarship includes two essay prompts that all applicants are asked to submit.

Essay Prompts:
A horse show photographer is important because…
What about being an equestrian has taught you about success and failure?

Aimee owns a Quarter Horse, As Good As You’ve Had. which she has competed in 13 different disciplines and classes at all levels from 4-H to the AQHA Novice Championships. She also owns a mini named Skip To My Lulu. Lulu was found by the MN Hooved Animal Rescue Foundation in 2008 in a half collapsed metal building with 50 other minis, starved and abused.

Aimee was only 11 years old when she first met Lulu.  It took two and a half hours the first day they met for Lulu to allow Aimee to touch her. Six months later, Aimee adopted Lulu, and a few years later, Aimee saved so she could register Lulu into the American Morgan Horse Association (AMHA) and the American Miniature Horse Register (AMHR) as Skip To My Lulu. Lulu became a 2x national champion in in-hand hunter and in-hand jumper at the 2014 AMHR Nationals, and was later inducted into their Hall of Fame. Lulu and Aimee visit nursing homes, and she has a growing fan base on both Facebook and Instagram. She went to ISU with her owner where she is the Equestrian Team’s unofficial mascot. Everywhere they goes, Aimee and Lulu promote horse rescue. They have performed across the Midwest at events including the Minnesota Horse Expo and Midwest Horse Fair. Last year, the USEF Equus Foundation recognized Lulu, and she was inducted into the Horse Stars Hall of Fame, becoming only the second Miniature Horse to be in the Hall of Fame.

“Without Lulu, I certainly would not be who I am today. She is the reason why I have fostered 13 miniature horses in five years for the Minnesota Hooved Animal Rescue Foundation. She’s taught me incredible lessons of patience, love, kindness, determination, and perseverance. Most of all, she’s been my best friend,” says Aimee.

Together with Plaid Horse publisher Piper Klemm, PhD, Andrew chose Schultz from hundreds of applicants. Klemm expressed keen admiration of Schultz’s commitment to her collegiate riding team. “Aimee works hard and understands the importance of giving back to grow and sustain our equestrian community. She does that in so many ways. Clearly, she’s had a huge impact on her ISU team is a short amount of time. She has embraced the team format that IHSA provides collegiate equestrians and used this platform to help her team reach high goals.”

Klemm and Ryback founded the scholarship to recognize equestrians that are dedicated to education. Says Ryback, “We want to acknowledge the impact that collegiate age riders have on our industry and community.”

The prize includes $2,500 for the receipt to use at their discretion.

The Plaid Horse is North America’s premiere horse show magazine. It is a print and digital publishing company providing exceptional coverage for the hunter/jumper/breeding disciplines and advertising at reasonable rates. The Plaid Horse supports equestrian competitors, horse fans, the general public, and suppliers to the industry through horse show and event coverage, equine articles of interest, and advertisements.

Be the Voice: The Horse Owner’s Responsibility of Advocacy