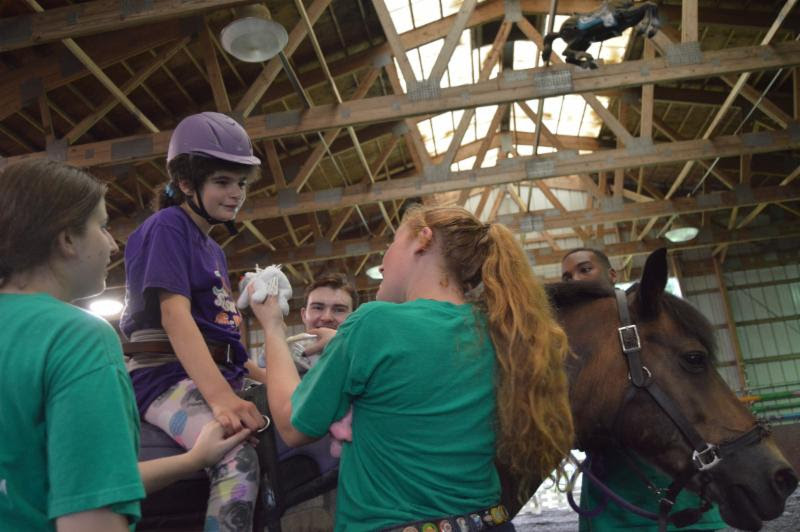 “Clyde” is a 23 year-old bay pony cross with a white star that stands just 13 hands. He has played a vital role in the therapeutic program at Pegasus for 17 years, welcoming numerous children with physical, developmental, and intellectual disabilities. He is well known for his gentle demeanor, patience and aptitude for bringing out the best in each child, helping to improve their balance, flexibility, strength, coordination, self-confidence, emotional control and general sense of well-being. He always puts a smile on their faces, especially when they get to feed him hard pretzels, his favorite treat!

“We are delighted to honor ‘Clyde’ with the 2016 Therapy Horse of the Year award,” said Susie Webb, PNHS Executive Director. “For nearly two decades he has helped to improve the lives of special children and their families and we are thrilled to pay tribute to him and what he has accomplished.”

The Pennsylvania National Horse Show presented by The Lindsay Maxwell Charitable Fund (PNHS) returns to the Pennsylvania Farm Show Complex and Expo Center in Harrisburg, PA, October 13-22. “Clyde” will be honored during a special awards ceremony in the main competition ring during the evening performance on “Foundation Friday,” Friday, October 21 where he will receive a Horse of the Year cooler, ribbon and prizes.

Pegasus Therapeutic Riding Academy is a 501(c)3 non-profit organization in Philadelphia, PA dedicated to providing therapeutic horseback riding programs and equine-assisted activities and therapies for children and adults with physical, developmental, and intellectual disabilities. Pegasus is a PATH International (Professional Association for Therapeutic Horsemanship) Premier Accredited Center and a member of the PA Council on Therapeutic Horsemanship.

The Pennsylvania National Horse Show Foundation is a 501(c)3 organization founded in 1999 that assists in funding therapeutic riding and equine rescue programs. Twenty-five equine groups have been chosen as grant recipients this year, including the Pegasus Therapeutic Riding Academy, all of which were eligible to nominate a horse from their facility for the “2016 Therapy Horse of the Year.” The proceeds from the PNHS are divided between the PNHS Foundation and The Harrisburg Kiwanis Youth Foundation. The PNHS Foundation gives to equine programs while the Kiwanis Foundation donates to youth programs. The PNHS has donated $1.68 million dollars to the Kiwanis Youth Foundation since its inception in 1947 and has donated $350,000 to local therapy and equine groups since 1999. Applications for grants are accepted throughout the year with action upon requests awarded in September. Jeffery Welles Brings It Home in the $15,000 KindredBio Jumper Prix